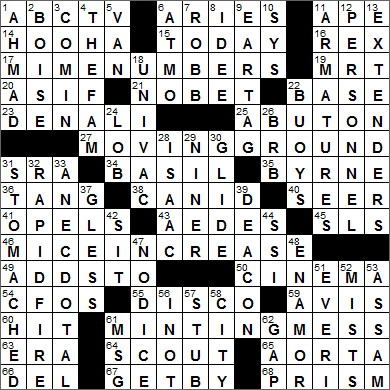 CROSSWORD SETTER: Warren Stabler
THEME: PR Is M … each of today’s themed answers is a well-known phrase, but with the letters PR replaced by the letter M:

68A. Solid that, when divided in three parts, describes this puzzle’s theme PRISM (or “PR is M”)
17A. Songs without words? MIME NUMBERS (from “prime numbers”)
27A. Earthquake consequence? MOVING GROUND (from “proving ground”)
46A. House cat’s challenge? MICE INCREASE (from “price increase”)
61A. Money-making fiasco? MINTING MESS (from “printing press”)

Today’s Wiki-est, Amazonian Googlies
Across
1. “Dancing With the Stars” network ABC TV
When I was growing up in the British Isles, there was a surprisingly popular BBC television show featuring professional ballroom dancing called “Come Dancing”. It ran almost every year from 1949 to 1998, and in 2004 the BBC resurrected it with a new twist, adding celebrities to dance with the professionals. The new show, called “Strictly Come Dancing”, is a huge success and has become a worldwide franchise. Over here we watch the American version called “Dancing with the Stars”. It really is fun television …

6. Early sign of spring ARIES
Aries the Ram is the first astrological sign in the Zodiac, and is named after the constellation. Your birth sign is Aries if you were born between March 21 and April 20, but if you are an Aries you would know that! “Aries” is the Latin word for “ram”.

17. Songs without words? MIME NUMBERS (from “prime numbers”)
A prime number is a number greater than 1 that can only be divided evenly by 1 and itself. There are still some unanswered questions involving prime numbers, perhaps most notably Goldbach’s Conjecture. This conjecture dates back to the 1740s and is assumed to be true, but has never been proven. It states that every even integer greater than 2 can be expressed as the sum of two prime numbers.

19. Celebrity known for wearing gold jewelry MR T
Mr. T’s real name is Laurence Tero Tureaud. Mr. T is famous for many things, including the wearing of excessive amounts of jewelry. He started this habit when he was working as a bouncer, wearing jewelry items that had been left behind by customers at a nightclub so that the items might be recognized and claimed. It was also as a bouncer that he adopted the name Mr. T. His catch phrase comes from the movie “Rocky III”. In the film, before he goes up against Rocky Balboa, Mr. T says, “No, I don’t hate Balboa, but I pity the fool”. He parlayed that line into quite a bit of success. He had a reality TV show called “I Pity the Fool”, and produced a motivational video called “Be Somebody … or Be Somebody’s Fool!”.

22. Corner of a diamond BASE
That would be a baseball diamond …

23. Place name derived from a Koyukon word for “tall” DENALI
Denali means “the high one” in the native Athabaskan language, and is now the name used for Mount McKinley. Denali’s summit stands at 20,237 feet, making it the highest mountain peak in North America. I was surprised to learn that there is a Denali State Park, as well as the Denali National Park. The two are located adjacent to each other (which makes sense!). The State Park is undeveloped for all practical purposes, with just a few campgrounds and trailheads.

The Koyukon are an Athabaskan-speaking people who traditionally lived along the Koyukuk and Yukon rivers in modern-day Alaska.

38. Dog or fox CANID
A canid is a carnivorous mammal of the family Canidae, which includes foxes, wolves, dogs, jackals and coyotes.

41. Autobahn autos OPELS
Adam Opel founded his company in 1863, first making sewing machines in a cowshed. Commercial success brought new premises and a new product line in 1886, namely penny-farthing bicycles. Adam Opel died in 1895, leaving his two sons with a company that made more penny-farthings and sewing machines than any other company in the world. In 1899 the two sons partnered with a locksmith and started to make cars, but not very successfully. Two years later, the locksmith was dropped in favor of a licensing arrangement with a French car company. By 1914, Opel was the largest manufacturer of automobiles in Germany. My Dad had an Opel in the seventies, a station wagon (we’d say “estate car” in Ireland) called an Opel Kadett.

43. Dreaded mosquito AEDES
The Aedes genus of mosquito is the most invasive mosquito in the world. The word “aedes” is an Ancient Greek term meaning “unpleasant, odious”, which I think it very apt …

45. Mercedes roadsters SLS
The Mercedes-Benz SL was first manufactured in 1954. The “SL” stands for Sport Leicht, or “Sport Light” in English.

55. Hustler’s genre DISCO
Discotheques first appeared during WWII in Occupied France. American-style music (like jazz and jitterbug dances) was banned by the Nazis, so French natives met in underground clubs that they called discotheques where records were often played on just a single turntable. After the war, these clubs came out into the open. One famous Paris discotheque was called “Whiskey a Gogo”. In that Paris disco, non-stop music was played using two turntables next to a dance-floor, and this concept spread around the world.

59. Dollar alternative AVIS
Avis has been around since 1946, and is the second largest car rental agency after Hertz. Avis has the distinction of being the first car rental company to locate a branch at an airport.

61. Money-making fiasco? MINTING MESS (from “printing press”)
Back in the mid-1800s, “fiasco” was theater slang meaning “failure in performance”. The meaning morphed soon after into any kind of failure or flop. The term evolved from the Italian “far fiasco”, a phrase that the same meaning in Italian theater, but translated literally as “make a bottle”. It turns out that “fiasco” and “flask” both derive from the Latin “flasco” meaning “bottle”.

65. Main artery AORTA
The aorta originates in the heart and extends down into the abdomen. It is the largest artery in the body.

68. Solid that, when divided into three parts, describes this puzzle’s theme PRISM (or “PR is M”)
When light passes through a prism, it is split up (“disperses”) into differing wavelengths. It then becomes clear that white light is actually a mixture of different colors, which show up as beautiful spectra.

Down
1. Sportscaster Rashad AHMAD
Ahmad Rashād is a former football player who now works with NBC as a sportscaster. Ahmad proposed marriage to actress Phylicia Ayers-Allen on national television in 1985. Phylicia, who played Bill Cosby’s wife on “The Cosby Show”, accepted the proposal and became Rashād’s third wife.

2. Capital on its own river BOISE
Boise, Idaho is the largest metropolitan area in the state by far. There are a number of stories pertaining to the etymology of the name “Boise”. One is that French trappers named the tree-lined river that ran through the area “la rivière boisée”, meaning “the wooded river”.

3. “__ Thro’ the Rye”: Burns COMIN’
“Comin’ Thro’ the Rye” is a 1782 poem by Scottish poet Robert Burns. The words are used in a traditional children’s song, which uses a variant of the tune for “Auld Lang Syne”. Here’s the chorus:

6. Sphere opening ATMO-
An atmosphere is the layer of gases surrounding a body, usually a planet. The word “atmosphere” comes from the Greek “atmos” meaning “vapor, steam”. The term was first applied to the Moon, which is a real paradox as the Moon doesn’t have any atmosphere.

7. Lynda Bird’s married name ROBB
Linda Byrd Johnson Robb is the eldest of President Johnson’s two daughters. While living in the White House, Lynda dated the actor George Hamilton. The pair became one of the first couples outside of the President and First Lady to be afforded Secret Service protection, largely due to concerns following the assassination of President Kennedy.

Chuck Robb is a former Governor of Virginia and former US Senator. Robb is married to Lynda Bird Johnson Robb, the daughter of former President Lyndon B. Johnson. The couple were married in the White House in December 1967.

8. Auteur’s starting point IDEE
In French, an “auteur” (author) might start a book with an “idée” (idea).

9. Stock tracking device EAR TAG
A cow might have an ear tag for the purpose of identification.

10. Part of PBS: Abbr. SYS
The Public Broadcasting Service (PBS) was founded in 1970, and is my favorite of the broadcast networks. I love PBS’s drama and science shows in particular, and always watch the election results coming in with the NewsHour team.

11. Current-carrying components ARMATURES
In an electric generator, the armature includes many windings of wire through which most the current flows. The armature interacts with a magnetic field, causing current to flow.

13. Substances that add protein to meat EXTENDERS
A “meat extender” is a non-meat source of protein that can be added to a meat product. The original use of extenders was to reduce cost, as in the use of rolled oats in sausage meat. Later usage focused on the addition of dietary fiber. One of the main meat extenders in use today is soy protein.

18. Pioneer mainframe UNIVAC
UNIVAC I was the first commercial computer made in the US. It was designed by the inventors of ENIAC, the first electronic computer built for the US government. The first UNIVAC sold went to the US Census Bureau in 1951. UNIVAC was used in 1951 to predict the outcome of the US presidential election scheduled for the following year. The traditional pollsters were predicting a win for Adlai Stevenson, but UNIVAC forecast a landslide win for Eisenhower. UNIVAC proved to be correct.

22. Depth indicators, at times BUOYS
I guess that one example of the use of buoys to indicate depth is surrounding the swimming area at a beach.

28. Son of Abraham ISAAC
According to the Hebrew Bible, Isaac was the only son of Abraham, born to his wife Sarah when she was beyond her childbearing years and when Abraham was 100 years old. Isaac himself lived until he was 180 years old. When Isaac was just a youth, Abraham was tested by Yahweh (God) and told to build an altar on which he was to sacrifice his only son. At the last minute an angel appeared and stopped Abraham, telling him to sacrifice a ram instead.

29. Levi’s Stadium player, familiarly NINER
The San Francisco 49ers of the NFL have been playing their home games in the Levi’s Stadium in Santa Clara since 2014. The team moved from the famous Candlestick Park, which they had been using since 1971. Levi’s Stadium, the team’s new home, got a big boost in January 2016 when it was the venue for the Super Bowl.

33. Like some speech components ANECDOTAL
An anecdote is a short account of an event, usually something amusing. The term ultimately derives from the Greek “anekdota” meaning “things unpublished”, or more literally “things not given out”.

53. State in northeast India ASSAM
Assam is a state in the very northeast of India, just south of the Himalayas. Assam is noted for its tea as well as its silk.

56. How ties may be broken, briefly IN OT
Overtime (OT)

61. Stir-fry additive MSG
Monosodium glutamate (MSG) is the sodium salt of a naturally-occurring,non-essential amino acid called glutamic acid. It is used widely as a flavor enhancer, particularly in many Asian cuisines. Whether or not it is harmful seems to be still under debate. I say that something produced in a test tube shouldn’t be in our food …