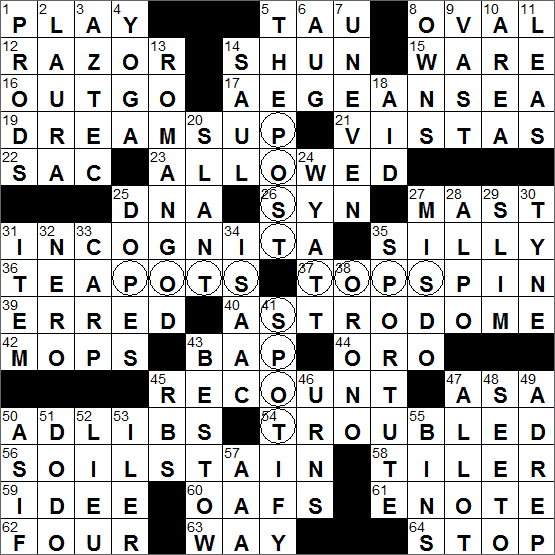 The circled letters in today’s grid spell out the word STOP in FOUR different directions, all meeting at the center of the grid. We have a FOUR-WAY STOP:

Cameo is a method of carving, often the carving of a gemstone or a piece of jewelry. The resulting image is in relief (sits proud of the background), whereas an engraved image would be produced by the similar carving method known as intaglio. Nowadays, the term cameo is used for any piece of oval-shaped jewelry that contains the image of a head, usually in profile (maybe even a photograph).

Spyware is software that is installed on a computer to gather information without the owner’s knowledge. Nasty stuff …

17…Home to Mykonos and Milos..AEGEAN SEA

Mykonos is a Greek island that is part of the Cyclades group. Mykonos has the nickname “the island of the winds”, a reference to the strong seasonal winds that impact the island in the winter and the summer.

Milos is a one the Cyclades group of Greek islands. Famously, the statue of Aphrodite that can been seen in the Louvre was discovered on the island in 1820. The more famous name for the statue “Venus de Milo” is a reference to the island of Milos.

“To decoct” is to extract the flavor of a liquid by boiling down and increasing the concentration. A related term is “to concoct”, meaning “to boil together”. We use the verb “to concoct” in figurative sense to mean to contrive, devise.

“Vista” is a word meaning “sight, view” that we imported into English from Italian.

The word “condensed” is a synonym (syn.) for the word “short”.

“Silly String” is a brand of “aerosol string”. The “string” exits the aerosol can as a liquid, with the solvent evaporating rapidly in mid-air resulting in a continuous strand. Aerosol string is used as a toy, an application that really annoys me (I’m an old grouch!). However, the military has a use for the product, spraying it over areas where tripwires are suspected. The string falls to the ground if none are present, but gets caught on tripwires that are present without activating any explosive.

The Houston baseball team changed its name to the Astros from the Colt .45s in 1965 when they started playing in the Astrodome. The Astrodome was so called in recognition of the city’s long association with the US space program.

The Baptist denominations of the Christian tradition embrace the doctrine of believer’s baptism as opposed to infant baptism.

Guatemala in Central America became independent from Spain in 1821, first becoming part of the Mexican Empire, and then completely independent two years later.

“Ad libitum” is a Latin phrase meaning “at one’s pleasure”. In common usage the phrase is usually shortened to “ad lib”. On the stage the concept of an “ad lib” is very familiar. For example, an actor may substitute his or her own words for forgotten lines using an ad lib, or a director may instruct an actor to use his or her own words at a particular point in a performance to promote a sense of spontaneity.

“Bridge Over Troubled Water” is a song written by Paul Simon and recorded by Simon & Garfunkel in 1970. This marvelous tune became Simon & Garfunkel’s biggest hit, and their signature song.

Alexis de Tocqueville was a French politician and historian who is famous in the US for his two-volume text “On Democracy in America” (“De La Démocratie en Amérique”) published in 1935 and 1849.

Our word “oaf”, meaning a stupid or clumsy person, comes from the Old Norse word “elf” meaning “silly person”. Our word “elf” has the same root. On the other side of the Atlantic, the plural of “elf” is “elves”, and in some dictionaries the plural of “oaf” is written as “oaves”.

The word “lummox” comes from East Anglian slang (northeast of London). The term is probably a contraction of “lumbering ox”.

The actress Laura Dern is the daughter of the actors Bruce Dern and Diane Ladd. Among her many notable roles, Laura played the Florida Secretary of State Katherine Harris in the 2008 movie “Recount”, and Dr. Ellie Sattler in the 1993 blockbuster “Jurassic Park”.

Texcoco was a city-state that lay just northeast of the Aztec capital of Tenochtitlan.

The “New York Post” is a daily newspaper that has been around since 1801, when it was established by Founding Father Alexander Hamilton. In the 19th century, the paper was known as the “New York Evening Post”, and was respected broadsheet. Rupert Murdoch took over in 1993 and turned it into the tabloid rag that it is today.

“The Washington Post” is the oldest paper still being published in the DC area, having been founded in 1877. Famously, “The Post” reporters Bob Woodward and Carl Bernstein led the media’s investigation into what we now called the Watergate scandal. “The Washington Post” was purchased in 2013 by Jeff Bezos, the founder and CEO of Amazon.com.

The uneven bars are a piece of equipment used in women’s gymnastics.

Neptune was the Roman god of the sea and of freshwater. He was sometimes known as “Neptunus Equester” as he was also the god of horses and patron of horse-racing.

“Better Call Saul” is a spinoff drama series from the hit show “Breaking Bad”. The main character is small-time lawyer Saul Goodman, played by Bob Odenkirk, who featured in the original series. “Better Call Saul” is set six years before Goodman makes an appearance in the “Breaking Bad” storyline. The lawyer’s real name is James Morgan McGill, and his pseudonym is a play on the words “S’all good, man!”

“Father Knows Best” is a radio and television sitcom that ran in the 1940s and 1950s. The title character was played by Robert Young, the actor who later played the title role on “Marcus Welby, M.D.”

Alpo is a brand of dog food first produced by Allen Products in 1936, with “Alpo” being an abbreviation for “Allen Products”.

Iams dog food was produced by the animal nutritionist Paul Iams. He felt that household pets were suffering somewhat by being fed a diet of table scraps, so he developed a dry dog food that he felt was more nutritious and suitable for pet dogs. He founded the Iams company, now part of Procter & Gamble, in 1946.

“Svelte” comes into English from Latin, via the Italian “svelto” meaning “stretched out”. Something or someone described as svelte would be slender and graceful.

30…River to the North Sea..TYNE

According to the Hebrew Bible, Isaac was the second son of Abraham, born to his wife Sarah when she was beyond her childbearing years and when Abraham was 100 years old. Isaac himself lived until he was 180 years old. When Isaac was just a youth, Abraham was tested by Yahweh (God) and told to build an altar on which he was to sacrifice his only son. At the last minute an angel appeared and stopped Abraham, telling him to sacrifice a ram instead.

Ishmael was the first son of Abraham, according to the Bible and the Qur’an. Ishmael’s mother was Hagar, the handmaiden to Abraham’s wife Sarah.

The Terrain is GMC’s smallest SUV.

Pandora is a clever music-streaming site that runs what’s called the Music Genome Project. The idea behind the project is that particular pieces of music can be classified by specific characteristics (genes). The assumption is that given a person’s liking for the genome of a particular song, then a recommendation of another song with a similar genome will also be enjoyed by that person. I’ve used Pandora quite a lot, and it seems to work!

In football, one might hand off to the running backs (RBs).

The dodo was a direct relative of the pigeon and dove, although the fully-grown dodo was usually three feet tall. One of the reasons the dodo comes to mind when we think of extinction of a species, is that it disappeared not too long ago and humans were the reason for its demise. The dodo lived exclusively on the island of Mauritius and when man arrived, we cut back the forests that were its home. We also introduced domestic animals, such as dogs and pigs, that ransacked the dodo’s nests.

53…Actor Robert of “The Sopranos”..ILER

The actor Robert Iler’s most famous role was A.J., son of mob leader Tony Soprano in HBO’s “The Sopranos”. Apparently Iler’s screen persona has spilled over into his personal life, as he was arrested for armed robbery of two tourists in 2001 (and pleaded guilty to a lesser charge).

1…Word with time or money..PLAY

17…Home to Mykonos and Milos..AEGEAN SEA

62…With 63- and 64-Across, meeting place suggested both literally and graphically by this puzzle’s circled letters..FOUR

30…River to the North Sea..TYNE

53…Actor Robert of “The Sopranos”..ILER