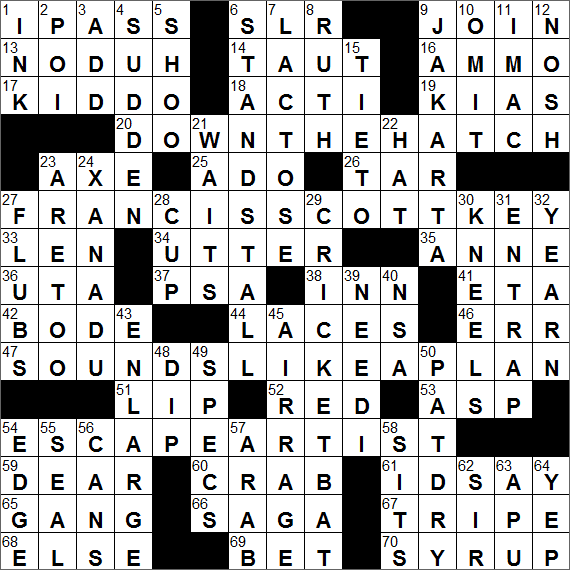 That would be in bridge, the card game.

SLR stands for “single lens reflex”. Usually cameras with changeable lenses are the SLR type. The main feature of an SLR is that a mirror reflects the image seen through the lens out through the viewfinder, so that the photographer sees exactly what the lens sees. The mirror moves out of the way as the picture is taken, and the image that comes through the lens falls onto unexposed film, or nowadays onto a digital sensor.

Nikon was founded in 1917 with the merger of three companies making various optical devices. After the merger, the company’s main output was lenses (including the first lenses for Canon cameras, before Canon made its own). During the war, Nikon sales grew rapidly as the company focused on (pun!) equipment for the military including periscopes and bomb sights.

Botulinum toxin is produced by the bacterium Clostridium botulinum. The toxin is a protein that can cause botulism, an extremely dangerous illness in humans and animals. Botulinum toxin is sold under the trade name Botox. Botox is used therapeutically and in cosmetic applications to weaken muscles, perhaps muscles that are in uncontrollable spasm. The cosmetic application involves the paralyzing of facial muscles in order to eliminate or reduce wrinkles, at least for a few months.

18…When Valjean adopts Cosette..ACT I

Victor Hugo’s famous 1862 novel “Les Misérables”, has been translated into English several times. However, the title is usually left in the original French as a successful translation of “les misérables” seems to be elusive. Some suggestions for an English title are “The Wretched”, “The Victims” and “The Dispossessed”. The novel follows the lives of several characters including an ex-convict Jean Valjean, a fanatic police inspector Javert, a beautiful prostitute Fantine, and Fantine’s illegitimate daughter Cosette.

The Kia Sorento is an SUV, and the Kia Sedona is a minivan.

The terms “tar”, “tarmac” and “macadam” are short for “tarmacadam”. In the 1800s, Scotsman John Loudon McAdam developed a style of road known as “macadam”. Macadam had a top-layer of crushed stone and gravel laid over larger stones. The macadam also had a convex cross-section so that water tended to drain to the sides. In 1901, a significant improvement was made by English engineer Edgar Purnell Hooley who introduced tar into the macadam, improving the resistance to water damage and practically eliminating dust. The “tar-penetration macadam” is the basis of what we now call Tarmac.

The lyrics to the US national anthem “The Star-Spangled Banner” were written in 1814 by Francis Scott Key as a poem called “Defence of Fort M’Henry”. “The Star-Spangled Banner” was adopted for official use by the US Navy in 1889, and by President Woodrow Wilson in 1889. The US Congress designated the song as the national anthem in 1931, with an act that was signed into law by President Herbert Hoover.

Anne Klein was a fashion designer from Brooklyn, New York.

Lactase is an enzyme produced in the digestive system of all infant humans. Lactase breaks down lactose, the complex sugar in milk. Lactase is produced by some adult humans, mainly those of European descent. Anyone lacking the ability to produce lactase is said to be “lactose intolerant”.

One might be forgiven for thinking that the candy bar called a Baby Ruth was named after baseball legend Babe Ruth. However, the Curtiss Candy Company that introduced the confection in 1921 has stated that it was in fact named for Ruth Cleveland, the daughter of President Grover Cleveland. That said, there seems to be some debate …

Jakarta is the capital of Indonesia and is located on the northwest coast of the island of Java. The city’s name comes from “Jayakarta” meaning “complete victory”.

“Kubla Khan” by Samuel Taylor Coleridge is my wife’s favorite poem. Coleridge wrote his masterpiece one night in 1797 after a vivid dream heavily influenced by opium.

In Xanadu did Kubla Khan
A stately pleasure-dome decree :
Where Alph, the sacred river, ran
Through caverns measureless to man
Down to a sunless sea.

That would be the flagstick marking a golf hole.

In cricket, a “pinch hitter” is a batsman who is already listed in the batting order, but who is promoted in that order. This tactic usually promotes a less valuable batsman in order to make more aggressive but risky shots. So, a pinch hitter is not a substitute, as is the case in baseball.

Incidents of “air rage”, disruptive and violent behavior by a passenger on an aircraft, seems to be a recent phenomenon. However, the first documented case of air rage dates back to 1947, with a drunk man assaulting a fellow passenger and an attendant on a flight from Havana to Miami.

Mecca is in the Makkah province of Saudi Arabia and is the holiest city in Islam. Every year several million Muslims perform the Hajj, a holy pilgrimage to Mecca.

18…When Valjean adopts Cosette..ACT I

1…Medium of much Chinese art..INK

43…Make easier to read, in a way..ENLARGE