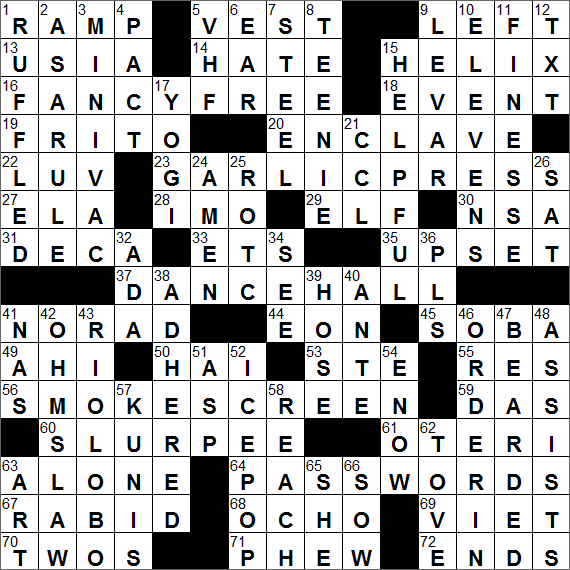 Today’s themed answers each end with a WORD that often precedes PASS:

The United States Information Agency (USIA) was established under President Eisenhower in 1953, and continued operating until 1999. It’s mission was “public diplomacy”, another term for propaganda broadcast over radio airwaves. The intent from day one was to avoid having the broadcasts identified as propaganda, and speaking as a former listener to the USIA’s Voice of America (VOA) over in Europe, there were a lot of fun programs that had one coming back to hear more, but we all knew it was propaganda quite frankly …

An enclave is a portion of a country, or sometimes a whole country, that is completed surrounded by another.

São Paulo is the largest city in Brazil. São Paulo is also the city with the highest number of helicopters in the world. This is partly driven by the horrendous traffic jams in São Paulo, but also by the wealthy having a very real fear of being kidnapped on the city’s streets.

The North American Defense Command (NORAD) isn’t just a US operation but is a cooperative arrangement between Canada and the United States. The two countries entered into an agreement to establish NORAD in 1958, mainly due to the concern that there would be little or no warning of a missile attack from the Soviet Union that came over the North Pole. NORAD also tracks Santa Claus coming from the North Pole every Christmas, and these days publishes Santa’s location on Christmas Eve on its website. The tracking of Santa started into 1955 when a local Sears store placed an advertisement in a Colorado Springs newspaper with a phone number that could be used to call Santa Claus. The newspaper accidentally printed the number for the Continental Air Defense Command (a precursor to NORAD). The officer on duty instructed his staff to give all children who called a “current location” for Santa. Today, NORAD gets about 120,000 phone queries about Santa’s location every year, and website gets about 20 million visitors.

“Hai” is the Japanese word for “yes”.

Okinawa is a large city located on the island of Okinawa in the very south of Japan. Okinawa is home to several US military facilities including Kadena Air Base and the Marine Corps’ Camp Foster.

A screen pass is a football play.

Icee and Slurpee are brand names of slushy drinks. Ugh …

Cheri Oteri was the SNL cast member who regularly appeared with Will Farrell in the skit featuring a pair of Spartan cheerleaders.

“Kung ho” is a Chinese expression meaning “work together, cooperate”. The anglicized version “gung ho” was adopted by a Major Evans Carlson as an expression of combined spirit for his 2nd Marine Raider Battalion during WWII. From there the term spread throughout the Marine Corps and back to America where it persists to this day.

During the Vietnam War, the political organization opposing the US and South Vietnamese governments was called the National Liberation Front (NLF). The NLF was referred to as the Viet Cong by the Western media, which is a contraction of “Viet Nam Cong-san” meaning “Vietnamese communist”.

A “text file” is one that includes only plain text, with little or no formatting, not even bold or italic type. Text files in the Windows operating system use the file extension “.txt”.

Rapper Nas used to go by another stage name, Nasty Nas, and before that by his real name, Nasir bin Olu Dara Jones. Nas released his first album “Illmatic” in 1994, and inventively titled his fifth studio album “Stillmatic”, released in 2001. Not my cup of tea, I would say …

Professor Albus Dumbledore is the headmaster of the school for wizards called Hogwarts, in the Harry Potter universe. Dumbledore’s specialties are nonverbal spells and alchemy. Author J. K. Rowling chose the name Dumbledore as it is an Early English word for a bumblebee. Apparently she pictured him wandering around, humming to himself.

The term “ice pop” has been supplanted in the US by “popsicle”, as the Popsicle brand of ice pop became so popular. We still use “ice pop” in Ireland, and in the UK the same thing is called an “ice lolly”, and in Australia it’s an “ice block”.

Mila Kunis is a Ukrainian-born, American actress, who plays Jackie Burkhart on “That ’70s Show”. Fans of the cartoon series “Family Guy” might recognize her voicing the Meg Griffin character. In ”Black Swan”, Kunis plays a rival ballet dancer to the character played by Natalie Portman. In her personal life, Kunis dated Macaulay Culkin for 8 years.

Here are the first two verses of “Jabberwocky” by Lewis Carroll, probably the one poem that we all just loved learning to recite at school:

“Beware the Jabberwock, my son!
The jaws that bite, the claws that catch!
Beware the Jubjub bird, and shun
The frumious Bandersnatch!

16…Without a care in the world..FANCY-FREE (giving “free pass”)