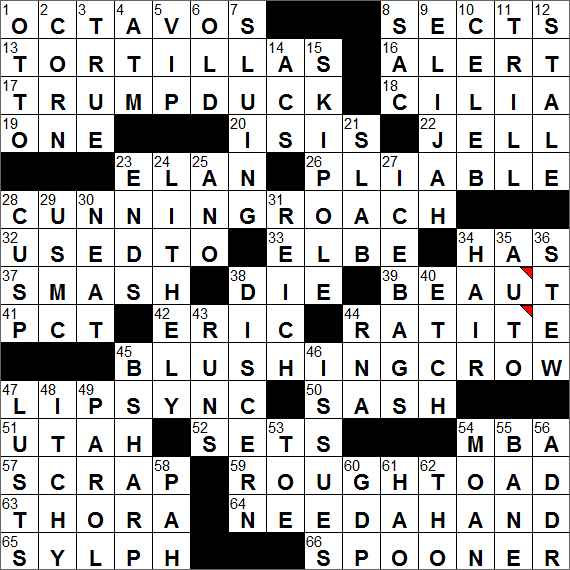 Today’s themed answers are all SPOONERISMS:

1…Books in which each sheet of paper is folded into eight leaves..OCTAVOS

Some common book formats/sizes are folio, octavo and quarto. For an octavo book, sixteen pages of text are printed, eight pages on each side of a “full-size” piece of paper. The pages are formed by folding the sheet of paper three times in half, giving a group of sixteen pages printed on eight leaves (after separation). The size of the resulting pages of course depends on the size of the original sheet, but each page is one eighth the size of that original (hence the name octavo). Nowadays the octavo size refers to books that are between eight and ten inches tall.

When Donald Trump won the nomination as presidential candidate in 2016, he wasn’t the first candidate to become the Republican nominee without any political experience. The most famous such candidate in recent decades was Dwight D. Eisenhower, who was put on the top of the ticket in 1952.

“Cilia” is Latin for “eyelashes”.

“One” is “one” of the big numbers in the hit musical “A Chorus Line”.

“A Chorus Line” is a phenomenal hit musical first staged in 1975, with music by Marvin Hamlisch and lyrics by Edward Kleban. The original Broadway production ran for well over 6,000 performances, making it the longest running production in Broadway history up to that time, a record held for over 20 years (until “Cats” came along).

20…Goddess with a throne headdress..ISIS

“Jell” means to congeal, to set. The word has been used since the early 1800s, and comes from the earlier word “jelly”. Nowadays, we tend to use the alternate spelling “gel”.

The German city of Dresden was almost completely destroyed during WWII, especially as a result of the famous firebombing of the city in 1945. Restoration work in the inner city in recent decades led to it being designated as a UNESCO World Heritage Site. However, in 2006 when the city built a highway bridge close to the city center, UNESCO took Dresden off the list. This marked the only time a European location has lost World Heritage status.

A “doozy” is something extraordinary or bizarre. The word’s exact origins aren’t clear, but it might be a derivative of the name Eleanora Duse, an Italian actress popular early in the 20th century.

44…The kiwi is the smallest one..RATITE

Ratites are species of birds that cannot fly. Ratites are different physiologically than other birds in that they have nowhere on their sternum to attach the muscles needed for flight.

The city of Sandy is a suburb of Salt Lake City.

54…Achievement of many a CEO..MBA

While I found the film “American Beauty” to be an enjoyable and interesting film (loved Annette Bening in it), I also found it very depressing. If you haven’t seen it, the main story is about a man having a midlife crisis (played by Kevin Spacey) and developing an infatuation for his teenage daughter’s flirtatious friend (played by Mena Suvari, and whom I guess is the “American Beauty”). It’s definitely worth watching, and received got huge accolades when released in 1999.

A sylph (also “sylphid”) is a mythological creature, an invisible and wispy being of the air. We also use the term “sylph” to describe a slender and graceful woman.

Anne Frank has to be one of the most famous victims of the Holocaust. This is largely because the story of this young girl lives on in her widely published diary, and in adaptations of the diary for stage and screen. Anne Frank was a German until she lost her nationality in 1941 when the Nazis came to power. By this time she was living with her family in Amsterdam, as the Franks chose to flee Germany in 1933. When the Germans occupied the Netherlands, the family went into hiding in the attic of Otto Frank’s office building (Otto was Anne’s father). There the family hid for two whole years until they were betrayed. The family was split up, and Anne and her sister died from typhus in a concentration camp in 1945.

“To slue” (also “slew) is to turn sharply, or to rotate on an axis.

That would be a sac(rifice) fly, in baseball.

Elijah was a prophet in the northern kingdom of Israel according to the Books of Kings in the Hebrew Bible and the Qur’an. The name “Elijah” translates from Hebrew as “My God is Yahweh”. Elijah is also known Elias.

In music a “trill” is the rapid alternation of two tones that are very close to each other to make a vibrato sound.

Marine Corps Base Camp Lejeune is located in Jacksonville, North Carolina. The 246-square mile facility includes 14 miles of beaches, making Camp Lejeune important for amphibious assault training. Built in 1941, the base was named for the 13th Commandant of the Marine Corps John A. Lejeune, who served in the USMC for nearly forty years, and who is often referred to as the “greatest of Leathernecks”.

The adjective “neat” has been used to describe “straight liquor” since about 1800. Before then, the term applied to wine, when it meant “unadulterated wine”. The term comes from Old French “net” meaning “clear, pure”.

Robert Reich is a political economist who served in three administrations, with Presidents Gerald Ford, Jimmy Carter and with Bill Clinton, for whom he was Secretary of Labor.

The Dodge Aries (and the Plymouth Reliant) were Chrysler’s first “K-cars”, introduced in 1981. The K-cars were designed to carry 6 passengers, on two bench seats. Remember taking a corner a little too fast on those seats, in the days when no one wore seat belts?

The Taurus is an incredibly successful car that was introduced by Ford in 1985. The Taurus was the successor to the Ford LTD, and is still in production today. The Taurus was the best-selling automobile in the US between 1992 and 1996, before being knocked off its pedestal by Japanese imports.

A “snag” is a pull or a tear in a fabric. A snag, particularly in stockings, might lead to a run. And on the other side of the Atlantic, a “run” is called a “ladder”.

That would be in music.

In the law, a statement described as “parol” is given orally as opposed to in written form.

An address (addr.) is usually required for a delivery (dely.).

61…One-tenth of a Vietnamese dong, formerly..HAO

1…Books in which each sheet of paper is folded into eight leaves..OCTAVOS

16…Not likely to miss much..ALERT

20…Goddess with a throne headdress..ISIS

44…The kiwi is the smallest one..RATITE

54…Achievement of many a CEO..MBA

2…With 13-Across, Mexican restaurant choices..CORN

15…Balancing aid on the slopes..SKI POLE

21…Piece at the butcher shop..SLAB

61…One-tenth of a Vietnamese dong, formerly..HAO