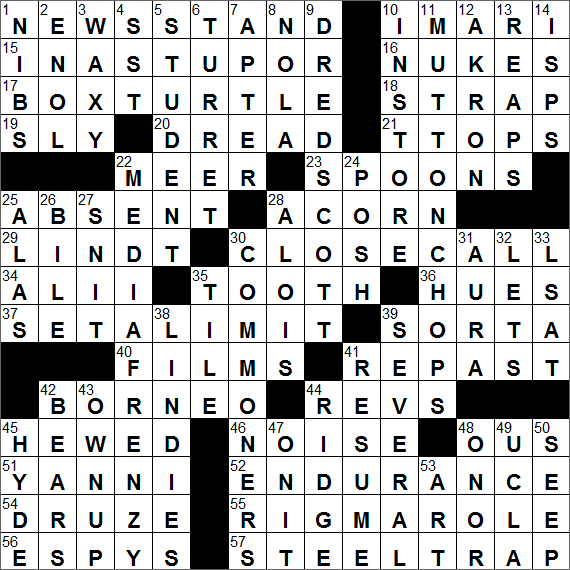 Imari is a port city located on the island of Kyushu in Japan. What Europeans know as Imari porcelain actually isn’t made in Imari, but rather in the nearby town of Arita. The name Imari was given to the porcelain because it was the port through which the ceramic ware was shipped. In Japan, the porcelains are called Arita-yaki.

The box turtle truly is a turtle, even though it lives on land. Because of its terrestrial home it is sometime wrongly referred to as the box tortoise.

Johnny Vander Meer was professional baseball pitcher, mainly with the Cincinnati Reds. Vander Meer threw a no-hitter against the Boston Braves in June, 1938. He three another no-hitter just four games later in his next game, against the Brooklyn Dodgers. That made Vander Meer the only man to ever throw two consecutive no-hitters in the Majors.

A cupule is that “cup” on the base of the acorn, in which the nut sits.

The delicious Swiss chocolate sold under the Lindt brand name has its origins in a small confectionery store in Zurich in the 1840s. Lindt purchased our local chocolate company here in San Francisco (Ghirardelli) back in 1998.

Mount Kinabalu on the island of Borneo is the highest peak in Malaysia.

Yanni is a remarkable Greek musician, very successful in the world of New Age music. What I find so remarkable is that he is a self-taught musician. Yanni was born Yiannis Chryssomallis in Kalamata, Greece and moved to the US in 1972 to attend the University of Minnesota.

The Druze community is a religious sect that is mainly found in Syria, Lebanon, Israel and Jordan. The Druze split off from Ismaili Muslims (a branch of Shia Islam) in the 11th century.

“Rigmarole” is a lovely word, used for an elaborate and complicated procedure. According to the OED, the term evolved from a medieval game of chance called “Ragman’s Roll”. I guess it was a complicated game …

Someone with “a mind like a steel trap” is someone able to think clearly and intelligently. The concept is that such a person can grasp something instantly, just like a steel trap snapping shut on an animal.

A “turret” is a small tower, and a word coming to us from Latin via French. The French word is “tourette” meaning small “tour”, small “tower”.

The oldest neighborhood in the city of New Orlean is the French Quarter, also called the “Vieux Carré (French for “Old Square”). After being founded by the French in 1718 as “La Nouvelle-Orléans”, the city developed around this central square.

Ambrose Burnside was a Union Army general during the Civil War, and a successful businessman. When the National Rifle Association was formed in 1871, Burnside was chosen as the organization’s first president. Burnside was also noted for the very lush growth of hair on his face and the distinctive style in which he cut it. We now know that style of cut as “sideburns”, a term derived from the Burnside name. When sideburns connect with the mustache, they might be termed “mutton chops”, a reference to their similarity in shape to the cut of meat.

An Internet Service Provider (ISP) is just what the name indicates, a company that provides its customers with access to the Internet. One way that ISPs differentiate themselves from each other is in the way in which end users are connected to the ISP’s network. So, there are cable ISPs, DSL ISPs, dial-up ISPs and satellite ISPs.

In days past, health was said to depend on the balance between the body’s four “humors”, four vital fluids. These humors were blood, phlegm, yellow bile (aka “choler”) and black bile. Excesses of yellow and black bile were thought to produce aggression and depression. As a result, we use the term “bile” today to mean “ill temper”.

Alzheimer’s disease is a form of dementia, the most common form of the condition. The disease is named for German psychiatrist and neuropathologist Alois Alzheimer, who first described it in 1906.

The Lindy hop (sometimes just “lindy”) is a swing dance that evolved in Harlem in the twenties and was especially popular during the swing Era of the thirties and forties. Allegedly, the dance is named for aviator Charles Lindbergh. Lucky Lindy “hopped” the Atlantic in 1927, making the first nonstop solo flight from the US to Europe.

When I was growing up in the British Isles, there was a surprisingly popular BBC television show featuring professional ballroom dancing called “Come Dancing”. It ran almost every year from 1949 to 1998, and in 2004 the BBC resurrected it with a new twist, adding celebrities to dance with the professionals. The new show, called “Strictly Come Dancing”, is a huge success and has become a worldwide franchise. Over here we watch the American version called “Dancing with the Stars”. It really is fun television …

Marshall McLuhan was a Canadian philosopher who is noted for his work in the field of media theory. McLuhan’s work held most sway in the sixties, at which time he coined the expressions “the medium is the message” and “global village”. He also predicted the development of the World Wide Web almost 30 years before it became a reality.

30…It may lead to an argument..CLOSE CALL

37…Allow it to go no further..SET A LIMIT

47…Taking care of business..ON IT