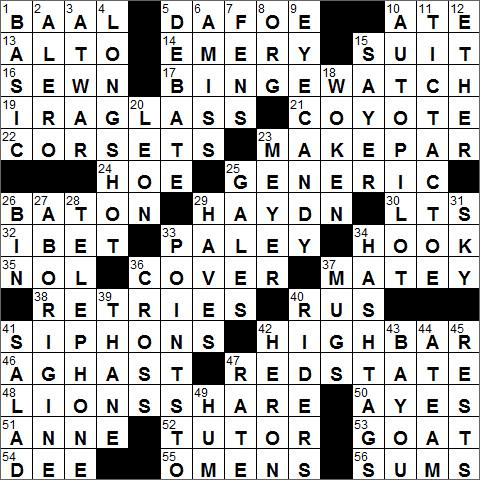 According to Canaanite mythology, Ba’al was the most powerful of all gods. He was worshiped as the sun, storm and fertility god.

Willem Dafoe is an American actor, from Wisconsin. He was born just plain William Dafoe, but didn’t like being called “Billy”. So, he changed his name to Willem, which was the pronunciation of his name by his Scottish babysitter. Those Scots …

That would be a choir loft.

I’m a big fan of binge-watching, the practice of watching perhaps two or three (even four!) episodes of a show in a row. My wife and I will often deliberately avoid watching a recommended show “live” and wait until whole series have been released on DVD or online. I’m not a big fan of “tune in next week …”

Ira Glass is a well-respected presenter on American Public Radio, most noted for his show “This American Life”. I was interested to learn that one of my favorite composers, Philip Glass, is Ira’s first cousin.

One’s “hap” is one’s luck. So to be “hapless” is to be out of luck, unfortunate.

23…What some pros often do..MAKE PAR

Josef Haydn was an Austrian composer, often called the “Father of the Symphony” due to his prolific output of symphonies that helped define the form. This is one of the reasons that he was known, even in his own lifetime, as “Papa Haydn”. Haydn was also the father figure among “the big three” composers of the Classical Period: Haydn, Mozart and Beethoven. Hayden was a good friend to Mozart, and a teacher of Beethoven.

William S. Paley was a pioneer in the world of broadcasting. Paley’s father purchased a 16-station radio network based in Philadelphia in 1920s. Within a decade, William had expanded the network, called the Columbia Phonographic Broadcasting System, to over 100 affiliate stations. Paley was the first to really understand that advertisers were the broadcaster’s customers, and that good programming attracted great advertisers/sponsors. Paley streamlined the company name to Columbia Broadcasting System, which eventually became the global giant named CBS.

Lon Nol was a soldier and politician in Cambodia, later serving twice as the country’s president. When the Khmer Rouge took over Cambodia in 1975, Nol escaped the country to Indonesia. He eventually found a home in Fullerton, California, where he died in 1985.

“Swabbie” (also “swabby, swab, swabber”) is a slang term for a sailor, which we’ve been using since the late 1700s. A “swab” was originally a member of the crew assigned to the swabbing (mopping) of the ship’s decks.

Anne Murray is a singer from Springhill, Nova Scotia. Murray’s 1978 hit “You Needed Me” went to number one in the US charts, marking the first time that a Canadian female artist achieved such a feat.

Something described as “forensic” is connected with a court of law, or with public discussion or debate. The the term comes from the Latin “forensis” meaning “of a forum, of a place of assembly”. We mainly use the word today to mean “pertaining to legal trials” as in “forensic medicine” and “forensic science”.

The Fens is a picturesque parkland in Boston. Once a saltwater marshland, urban development since the late 1800s has turned the area into what is essentially a freshwater lagoon. The Fens (sometimes “Back Bay Fens”) gave its name to the Fenway-Kenmore neighborhood, and ultimately to the famous Fenway Park baseball stadium.

Leo Sayer is a British singer who was big in the seventies with hits such as “You Make Me Feel Like Dancing” and “When I Need You”. Sayer now lives in Australia.

20…Spanish province or its capital..LEON

León is a province in the autonomous community of Castile and León in the northwest of Spain. The province’s capital is the city of León, which was founded as Roman military encampment around 29 BC.

The gangster Meyer Lansky was known as the “Mob’s Accountant”. When he died in 1983 at the ripe old age of 80 years, on paper Lansky was worth almost nothing. However, the FBI believed that he actually had about $300 million in hidden bank accounts, funds which the authorities were never able to find.

The party game known as telephone here in the US is also known as Chinese whispers in other nations. The idea of the game is for a message to be whispered from player to player along a line. By the time the message has passed along the whole line, it usually changes due to mishearing. Comparison of the original and final versions of the message can be quite hilarious.

The sky’s the limit.

34…They can also represent pounds..HASHTAGS

A hashtag is word preceded by the symbol #. Hashtags are big these days because of its use by Twitter. The “#” symbol is usually referred to as the “number sign”, but here in the US the name “pound sign” is very common as well.

The verb “to mug” means to make an exaggerated facial expression. The term comes from mugs used to drink beer (called Toby mugs) that are the made in the shape of heads with grotesque expressions. “Mug” can also be a noun meaning “face”.

Thanes were Scottish aristocrats. The most famous thanes have to be the Shakespearean characters Macbeth (the Thane of Glamis, later Thane of Cawdor) and MacDuff (the Thane of Fife). Other thanes in “Macbeth” are Ross, Lennox and Angus, as well as Menteith and Caithness.

“Blue Bayou” is a lovely ballad written by Roy Orbison and Joe Melson, released in 1963 by Orbison. Although the song never made it to the top of the charts over here in the US, it did in Ireland! Linda Ronstadt recorded a famous cover version in 1977. In baseball parlance, a fastball is sometimes called a “Linda Ronstadt”, as it is a pitch that “blew by you …”

“Rattle and Hum” is a studio album released by Irish band U2 in 1988. The album’s title was also used for a “rockumentary” film that built around two concerts the band performed in Denver in 1987.

23…What some pros often do..MAKE PAR

4…One not likely to succeed..LONG SHOT

20…Spanish province or its capital..LEON

34…They can also represent pounds..HASHTAGS