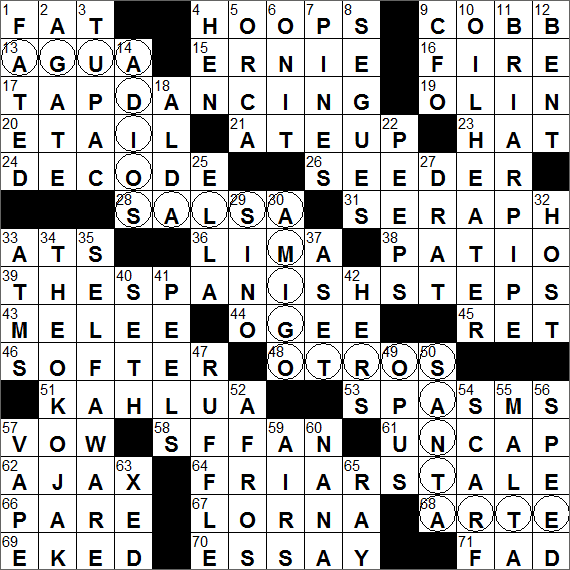 The fatty component of milk is known as butterfat (sometime “milkfat”). To be labeled “whole” milk, the butterfat content must be at least 3.25%. Lowfat milk is defined as milk containing 0.5-2% fat, with levels of 1% and 2% commonly found on grocery store shelves. Skim milk must contain less than 0.5% fat, and typically contains 0.1%.

The baseball player Ty Cobb was born in Narrows, Georgia and died 74 years later in Atlanta, Georgia. He was nicknamed “The Georgia Peach”. Cobb was one of the richest baseball players of all times. When he retired, Cobb was a major stockholder of the Coca-Cola Corporation. By the time he passed away in 1961, Cobb had an even bigger investment in General Electric. He left an estate after his death worth about $86m (in 2008 dollars). The most common nickname associated with Cobb during his career was “the Georgia Peach”.

Ernie Kovacs was an American comedian who was active in the fifties and early sixties. Famously, Kovacs was married to actress, singer and comedienne Edie Adams. Sadly, Kovacs died in a car accident in 1962.

Bill Robinson was a tap dancer and actor who often went by the nickname “Bojangles”. It was Bojangles who often danced with child star Shirley Temple in a whole series of films from the 1930s. He also starred in 1943’s “Stormy Weather”, a movie that was loosely based on Robinson’s own life.

“Etail” is the term used these days for online shopping (coming from “retail”). Etail is often compared to regular shopping in the “real world” by juxtaposing it with a “brick and mortar” store.

Amazon.com is the largest online retailer in the world. The company was founded in 1994 by Jeff Bezos, in his garage in Bellevue, Washington. I’m a big fan of Amazon’s approach to customer service …

A seraph is a celestial being found in Hebrew and Christian writings. The word “seraph” (plural “seraphim”) literally translates as “burning one”. Seraphs are the highest-ranking angels in the Christian tradition, and the fifth-ranking of ten in the Jewish tradition.

Rome’s Spanish Steps are known locally as the “Scalinata” and are a set of 135 steps that sit above the Piazza di Spagna. The Spanish Steps actually form the widest staircase in Europe. They always remind me of the movie “Roman Holiday”, as that is where Audrey Hepburn enjoyed her gelato.

The Social Security Administration (SSA) was set up as part of President Franklin D. Roosevelt’s New Deal. The first person to receive a monthly retirement benefit was Ida May Fuller of Vermont who received her first check for the sum of $22.54 after having contributed for three years through payroll taxes. The New Deal turned out to be a good deal for Ms. Fuller, as she lived to 100 years of age and received a total benefit of almost $23,000, whereas her three years of contributions added up to just $24.75.

Kahlúa is a rum-based liqueur from Mexico that has a coffee flavor.

A B-52 is a layered cocktail that is usually served as a shot. It consists of coffee liqueur on the bottom, Irish cream in the center, and triple sec on top. The drink is named for the rock band called the B-52’s, and in turn the band is named for the long-range bomber.

58…One rooting for the Niners, briefly..SF FAN

The National Football League team in San Francisco takes its name from the gold prospectors who flooded into Northern California around 1849 during the California Gold Rush. These 1849-prospectors became known as the “49ers”.

The California gold rush actually started in 1848. The first to exploit the find were those people already in California. By 1849 the word had spread and gold-seekers started to arrive from all over the world. The “out-of-towners” who arrived in 1849 became known as forty-niners.

Ajax was a figure in Greek mythology, and was the cousin of Achilles. Ajaz is an important figure in Homer’s “Iliad”. According to Homer, Ajax was chosen by lot to meet Hector in an epic duel that lasted a whole day. The duel ended in a draw.

Geoffrey Chaucer was an English author. He is often referred to as the father of English literature because he established vernacular English as a legitimate language for artistic works, as up to that point authors used French or Latin. Chaucer’s most famous work is actually unfinished, a collection of stories called “The Canterbury Tales” that were all written at the end of the 14th century.

Rapper Tupac Amaru Shakur adopted the inventive stage name “2Pac”. He was a hard man, spending eleven months in prison for sexual assault. At only 25 years of age he was killed in a drive-by shooting in Las Vegas.

The wood of the tree heath plant is known as briar root and is extremely heat-resistant. As a result, briar root is used to make smoking pipes.

A crowbar is a wonderful tool, one that can be used to pry open things, and to remove nails. The claw at one or both ends of the tool aids in that nail removal, and it is likely this “claw” was said to resemble that of a crow, giving us the name “crowbar”. Back in Elizabethan times. the same tool was called an “iron crow”. There’s a line in Shakespeare’s “Romeo and Juliet” that reads “Get me an iron crow and bring it straight/Unto my cell.”

“Kojak” is a fun police drama that had an original run on TV from 1973 to 1978. The title character was NYPD Detective Lieutenant Theo Kojak, played by Telly Savalas. Famously, Kojak sucks away on Tootsie Pops as he tries to quit cigarettes. Kojak is assisted in his cases by Sergeant “Fatso” Stavros, a character played by George Savalas, Telly’s younger brother. Who loves ya, baby?

Seth MacFarlane is best known for creating the very successful (although they don’t get my vote!) animated TV shows “Family Guy” and “American Dad!”. My kids love ’em …

Sirrah, your brother is legitimate;
Your father’s wife did after wedlock bear him,
And if she did play false, the fault was hers;
Which fault lies on the hazards of all husbands
That marry wives.

William Shakespeare’s play “King John” is a historical drama about the reign of King John, son of Henry II and Eleanor Aquitaine. The play is rarely staged these days, although “King John” was a very popular theater production during the Victorian era.

A dust ruffle (also “bed skirt” or “valance”) is a decorative piece of bedding that covers the boxspring and legs of the bed.

The island state of Malta is relatively small, but its large number of inhabitants makes it one of the most densely populated countries in Europe. Malta’s strategic location has made it a prized possession for the conquering empires of the world. Most recently it was part of the British Empire and was an important fleet headquarters. Malta played a crucial role for the Allies during WWII as it was located very close to the Axis shipping lanes in the Mediterranean. The Siege of Malta lasted from 1940 to 1942, a prolonged attack by the Italians and Germans on the RAF and Royal Navy, and the people of Malta. When the siege was lifted, King George VI awarded the George Cross to the people of Malta collectively in recognition of their heroism and devotion to the Allied cause. The George Cross can still be seen on the Maltese flag, even though Britain granted Malta independence in 1964.

An electronic cigarette (also called an “e-cigarette”) is a battery-powered device that resembles a real cigarette. The e-cigarette vaporizes a solution that contains nicotine, forming a vapor that resembles smoke. The vapor is inhaled, delivering the nicotine into the body. The assumption is that an e-cigarette is healthier than a regular cigarette as the inhaled vapor is less harmful than inhaled smoke. But, that may not be so …

46…Claim in a tissue ad..SOFTER

58…One rooting for the Niners, briefly..SF FAN

69…Produced with effort, with “out”..EKED

35…Mindful of one’s own needs..SELF-AWARE

65…Slight manifestation, as of hope..RAY