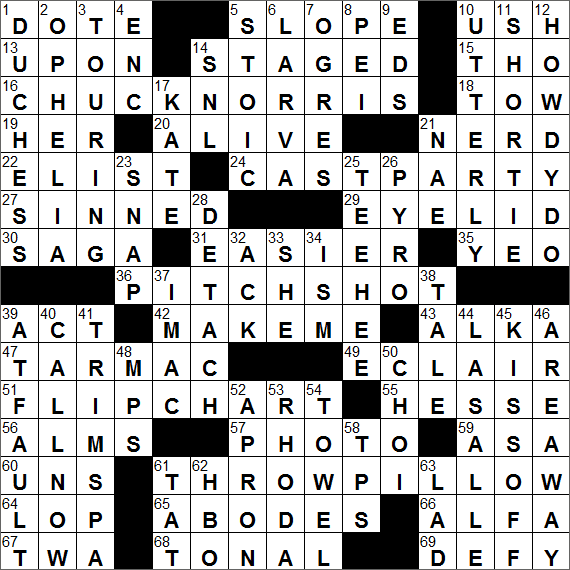 The first word in each of today’s themed answers is a synonym of “fling”.

Hermann Hesse was not only a novelist, but also a poet and a painter. His best known work is probably his 1927 novel “Steppenwolf”.

The 1922 novel “Siddhartha” by Hermann Hesse focuses on the spiritual journey of a man called Siddhartha. Even though the Buddha’s name was Siddhartha Gautama before he renounced his former life, Hesse’s Siddhartha is a different character who lived around the time of the Buddha.

The “Alfa” in Alfa Romeo is actually an acronym, standing for Anonima Lombarda Fabbrica Automobili (“Lombard Automobile Factory, Public Company”). ALFA was an enterprise founded in 1909 and which was taken over by Nicola Romeo in 1915. In 1920 the company name was changed to Alfa Romeo.

In Shakespeare’s “Hamlet”, Ophelia is courted by Hamlet. In Act III, Hamlet is pretty depressed and upset, and addresses Ophelia with the famous line “Get thee to a nunn’ry, why woulds’t thou be a breeder of sinners?” In this scene, Hamlet is denying that he ever loved Ophelia, and exorts her to “become a nun”, so that she may never have to give birth to someone as pitiful and sinful as himself.

The Shar-Pei breed of dog is that one with the wrinkly face and really dark tongue. The breed originated in China, with “Shar-Pei” being the British spelling of the Cantonese name.

What is now called the GE Building in New York City, was originally known as the RCA Building, with the name changing in 1988 after the 1986 takeover of RCA by GE. The building was completed in 1933 as part of the Rockefeller Center and was named for its main tenant RCA. Famously, the skyscraper’s address of 30 Rockefeller Center is routinely shortened to “30 Rock”.

Kate Middleton is the wife of Prince William of the UK. Middleton is what one might call a commoner, although since her marriage she is known as the Duchess of Cambridge. She was born to parents who had worked together as flight attendants before becoming quite wealthy running their own mail-order business. As is so often the case in Britain, Kate’s ancestry can be traced back far enough to show that she and William do have common ancestors, dating back to the 1500s on her mother’s side and to the 1400s on her father’s side.

“Pyro” is the combining form of the Greek word for “fire”. “Pyrotechnics” is the art of making and using fireworks.

Canterbury is a city in the southeast of England in the county of Kent. Canterbury is famous for Canterbury Cathedral where Thomas Becket was murdered in 1170, making it a pilgrimage destination for Christians. It was one of these pilgrimages that was the inspiration for Geoffrey Chaucer’s “The Canterbury Tales”, written in the 14th century.

TrimSpa is a dietary supplement touted as an to weight loss. Its active ingredients are stimulants (like caffeine). TrimSpa became quite famous when the manufacturers hired Anna Nicole Smith as spokesperson for the product.

“True Detective” is a crime drama made by HBO that has an interesting format. Each series has its own narrative and cast. The show seems to be attracting some great actors. The first season was led by Matthew McConaughey and Woody Harrelson, and the second by Colin Farrell and Rachel McAdams.

We’ve been calling youths “striplings” since the 14th century. The name probably originates from the description of a youth as a thin strip of a thing. I was a stripling once, a long, long time ago …

54…Item draped on a rack..TOWEL