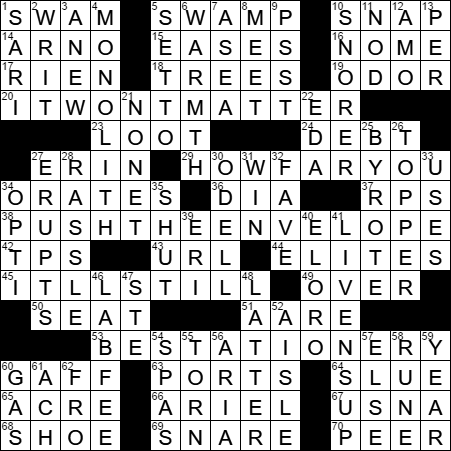 An Ironman Triathlon is a race involving a 2.4 mile swim, a 112 mile bike ride, and a marathon run of just over 26 miles. The idea for the race came out of a debate between some runners in the 1977 Oahu Perimeter Relay. They were questioning whether runners, swimmers or bikers were the most fit athletes. The debaters decided to combine three local events to determine the answer, inviting athletes from all three disciplines. The events that were mimicked to come up with the first triathlon were the Waikiki Roughwater swim (2.4 miles), the Around-Oahu Bike Race (115 miles) and the Honolulu Marathon (26.2 miles). The idea was that whoever finished first would be called “the Iron Man”. The first triathlon was run in 1978, with fifteen starters and only twelve finishers. The race format is used all over the world now, but the Hawaiian Ironman is the event that everyone wants to win.

The Nome Gold Rush of 1899-1909 was remarkable in the ease that the precious metal could be gathered. Many prospectors were finding gold lying in beach sand and were making their fortunes without even having to make a claim.

The word “nothing” translates to “nada” in Spanish and “rien” in French.

A gaff is that dangerous-looking metal hook on the end of a pole that fishermen use to drag large fish into their boats.

The Ariel is the Mexican Academy of Film Award, set up in 1947. It is considered Mexico’s equivalent to the Oscar. The name “Ariel” is a nod to “Ariel”, an influential essay by Uruguayan author José Enrique Rodó published in 1900.

John McCain went into the US Naval Academy in 1958, following a family tradition as his father and grandfather were both four-star admirals. The younger McCain did not achieve the same rank, retiring from the Navy as a captain in 1981, but his career development was interrupted by almost six years spent as a prisoner of war (POW) in North Vietnam. John McCain has been a US Senator from Arizona since 1987.

These days, a dealer in a casino usually deals cards from a shoe. The shoe has only been around since 1961 when it was invented by magician John Scarne. The dealing device is so called because early versions resembled a woman’s high-heel shoe.

A writ is an order issued by some formal body (these days, usually a court) with the order being in written form. Warrants and subpoenas are examples of writs.

My wife solved this clue instantly, while giving me a dirty look …

The Te-Amo brand of cigars have been made in the San Andres Valley in the state of Veracruz, Mexico since 1963.

The linguistic root “-opti-” appears in words such as optical, autopsy and myopia. “-opti-” comes from the Greek for “light, sight”.

El Oro is a coastal province in the south of Ecuador. El Oro (meaning “The Gold”) takes its name from the gold production industry. The province is also one of the biggest banana exporters in the world.

The Church of Jesus Christ of Latter-day Saints, often abbreviated to “LDS”, is known colloquially as the Mormon Church.

That would be a jail sentence.