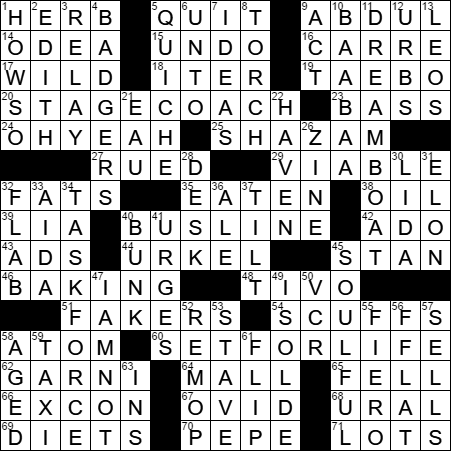 Today’s themed answers end with a SET of words that often follow the word LIFE:

About 50% of all cats are affected in some way by the plant catnip. There is a terpenoid in the oil of the plant called nepetalactone that the cat inhales and that can cause anything from drowsiness to anxiety.

What we know here in North America as cilantro is called coriander in the UK and other parts of the world. “Cilantro” is the Spanish name for the herb.

The expression “to throw in the towel” means “to give up”, and of course comes from the world of boxing. In boxing, when someone in the corner feels that a fight needs to be stopped, he or she throws a towel into the ring and accepts the loss. Back in the 1700s, it wasn’t a towel that was thrown into the ring, but rather a sponge.

“Iter” is the Latin for “road, journey”.

“Shazam” is a word that was coined in the “Captain Marvel” comics in 1940. Billy Batson is a boy who can transform himself into the superhero Captain Marvel by speaking the magic word “Shazam”.

Jiffy Lube is an automotive service chain of businesses that specializes in quick oil changes. The Jiffy Lube slogan is “The Well-Oiled Machine”.

Trailways is a network of about 70 independent bus companies based in Fairfax, Virginia. All of the member companies include word “Trailways” name in their name, e.g. Adirondack Trailways in Hurley, New York and Lone Star Trailways in Tyler, Texas.

Today, “pennysaver” is a generic term for a free periodical issued in a community, offering items and services for sale. The original “Pennysaver” was published in 1948 in Ohio by Horace Greeley and Ralph St. Denny.

Steve Urkel is a character on the TV show “Family Matters” that aired in the late eighties and nineties. The Urkel character was the archetypal “geek”, played by Jaleel White. Urkel was originally written into the show’s storyline for just one episode, but before long Urkel was the show’s most popular recurring character.

Stan Kenton was a pianist, composer and jazz orchestra leader from Wichita, Kansas. Kenton’s style of music was called “the Wall of Sound”, and that was back in the 1940s. Phil Spector used the same phrase decades later, in the early sixties.

TiVo was introduced in 1999 and was the world’s first commercially successful DVR (Digital Video Recorder).

The pen (penitentiary) is “up the river”. The phrase derives from the fact that Sing Sing prison (in Ossining, NY) is up the Hudson River from New York City.

“José” is the Spanish for “Joseph”. Friends might also refer to José as “Pepe”. Both José and Pepe derive from Saint Joseph, the father of Jesus. Saint Joseph is sometimes referred to as “padre putativo” meaning “presumed father”. The initialism “PP”, standing for “padre putativo”, led to the name “Pepe”.

The classic dish called quiche is made with eggs (“oeufs” in French). Even though the quiche is inextricably linked to French cuisine, the name “quiche” comes from the German word for cake, “Kuchen”. The variant called “quiche lorraine” includes bits of smoked bacon as an ingredient.

The Golden Rule is also known as the ethic of reciprocity, and is a basis for the concept of human rights. A version of the rule used in the Christian tradition is attributed to Jesus: “Do unto others as you would have them do unto you”.

A flame is used as the symbol for the Olympic Games in commemoration of the theft of fire for humanity by Prometheus from Zeus in Greek mythology. The symbolic flame was introduced to the Modern Olympics in the 1928 Summer Games in Amsterdam. I was surprised to learn that the tradition of the Olympic torch relay started out as political theater devised and funded by Nazi Germany for the 1936 Summer Games in Berlin.

“Eau” is the French word for “water”.

A “zine” is a magazine, with the term often reserved for noncommercial publications including those issued online.

“The Music Man” is a musical by Meredith Willson. The show was a big hit on Broadway in 1957. “The Music Man” won the first ever Grammy Award for the “Best Original Cast Album”. The show is set in the fictional River City, Iowa.

Elon is a city in the Piedmont region of North Carolina, close to the city of Burlington. Elon University is a private liberal arts school founded in 1889.

“Aida” is the famous opera by Giuseppe Verdi, actually based on a scenario written by French Egyptologist Auguste Mariette. Mariette also designed the costumes and stages for the opening performance. The opera was first staged in 1871 in an opera house in Cairo. In the storyline, Aida is an Ethiopian princess brought into Egypt as a slave. Radames is an Egyptian commander who falls in love with her, and then of course complications arise!

“Tristan und Isolde” is an epic opera by Richard Wagner (Wagner … not one of my favorites!). Many see the work as the first serious move away from the traditional harmony and tonality of the classical and romantic eras.

The word “stave” was originally the plural of “staff”, a wooden rod. To “stave off” originated with the concept of holding off with a staff. In the world of barrel-making, a stave is a narrow strip of wood that forms part of a barrel’s sides.

29. Workable, as an alternative : VIABLE

60. Having financial freedom … and, literally, what the last words of the answers to starred clues comprise : SET FOR LIFE