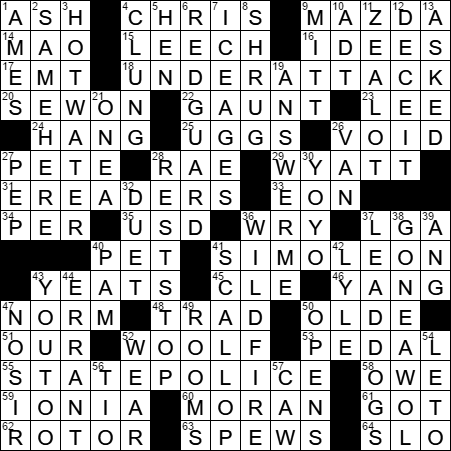 Today’s themed answers each comprise two words, both of which often LEAD into DOG:

Chris Rock is a great stand-up comedian. Interestingly, Rock cites his paternal grandfather as an influence on his performing style. Grandfather Allen Rock was a preacher.

Uggs are sheepskin boots that were first produced in Australia and New Zealand. The original Uggs have sheepskin fleece on the inside for comfort and insulation, with a tanned leather surface on the outside for durability. Ugg is a generic term Down Under, although it’s a brand name here in the US.

“Sneaky Pete” is a slang term for cheap fortified wine, often associated with down and outs sleeping rough on skid row.

“Sailing to Byzantium” is a poem by Irish poet William Butler Yeats, and one that almost every Irish teenager has to study in school.

“Our Town” is a play by Thornton Wilder, first performed in 1938. Wilder won a Pulitzer for the work. “Our Town” was actually banned by the Soviet authorities in East Berlin in 1946. Their reasoning was that “the drama was too depressing and could inspire a German suicide wave”.

“Mrs. Dalloway” is a novel by Virginia Woolf, first published in 1925. The story tells of a day in the life of Clarissa Dalloway, a day in which she is preparing for a party that she is hosting. The novel has been compared to “Ulysses” by James Joyce, a story about a day in the life of Leopold Bloom.

The first US state to designate an official state dog breed was Maryland, when it chose the Chesapeake Bay Retriever in 1964.

Bugs Moran was a Chicago gangster, the main rival to the slightly more famous Al Capone. Moran tried twice to kill Capone. In the first attempt Moran and his gang shot at Capone from their car as their target was getting out of his own automobile. They missed Capone, and he took to driving in an armored vehicle after that. The second, more famous attempt (in 1926), involved Moran and a fleet of cars driving by Capone’s hotel and spraying the lobby in which he was standing. Again, Capone escaped unharmed. Three years later, in February 1929, six members of Moran’s gang were lined up against a wall and shot by order of Capone, an incident we now remember as the famous St. Valentine’s Day Massacre.

Water dogs are dogs that are specially bred to retrieve game from water. Examples of breeds referred to as water dogs are the golden retriever, the Newfoundland and the standard poodle.

In football, a blitz (also called “red dog”) is a maneuver by players in the line of scrimmage designed to quickly overwhelm the opposing quarterback.

Andirons (also “firedogs”) are those horizontal bars on which you rest logs to burn in an open fireplace. They usually come in pairs and can be quite decorative, and are often made out of wrought iron.

37. Iditarod front-runners … or what both parts of the answers to starred clues can do? : LEAD DOGS

The Iditarod Trail Sled Dog Race covers an incredible 1,161 miles, from Anchorage to Nome in Alaska. The race starts every year on the first Saturday in March, with the first race having been held in 1973. The fastest finishing time was set in 2002 at just under 9 days. The first few races only used a northern route, but then a southern route was added to the roster every second year. It’s kind of a good thing, because when the racers take the northern route they don’t even pass through the town of Iditarod!

PAM cooking oil was introduced in 1961 by Leon Rubin and Arthur Meyerhoff. The name “PAM” is an acronym … standing for “Product of Arthur Meyerhoff”. Who’d a thunk it …?

A scallop is a marine mollusk that is served as seafood. Scallops are often served baked in milk and this method of preparation has become known as “scalloping”. So, scalloped potatoes are potatoes baked in milk.

Clue is board game that we knew under a different name growing up in Ireland. Outside of North America, Clue is marketed as Cluedo. Cluedo was the original name of the game, introduced in 1949 by the famous British board game manufacturer Waddingtons. There are cute differences between the US and UK versions. For example, the man who is murdered is called Dr. Black (Mr. Boddy in the US), one of the suspects is the Reverend Green (Mr. Green in the US), and the suspect weapons include a dagger (a knife in the US), a lead pipe (lead piping in the US) and a spanner (a wrench in the US). I think it’s a fabulous game, a must during the holidays …

Jared Leto is an actor and musician. In the world of music, Leto is the lead singer and rhythm guitarist for the rock band 30 Seconds to Mars. In the film world, one of his most critically acclaimed role was that of a heroin addict in “Requiem for a Dream”. He also appeared in “American Psycho”, “Panic Room” and “Lord of War”. Leto won a Best Supporting Actor Oscar for portraying a transgender woman in 2013’s “Dallas Buyers Club”.

“Suicide Squad” is superhero film released in 2016, although the title characters are a team of DC Comics “antiheroes”. I haven’t seen the film (I don’t really do superhero movies) but the plot reminds my of 1967’s “The Dirty Dozen”. A government agency puts together a team of supervillains to carry out a dangerous mission in exchange for reduced prison sentences.

“Cacophony” is such a lovely word, one used to describe a harsh or jarring sound. The term arises from the Greek “kakos” (bad) and “phone” (voice).

19. Mom’s demand for an explanation : ANSWER ME!

37. Iditarod front-runners … or what both parts of the answers to starred clues can do? : LEAD DOGS