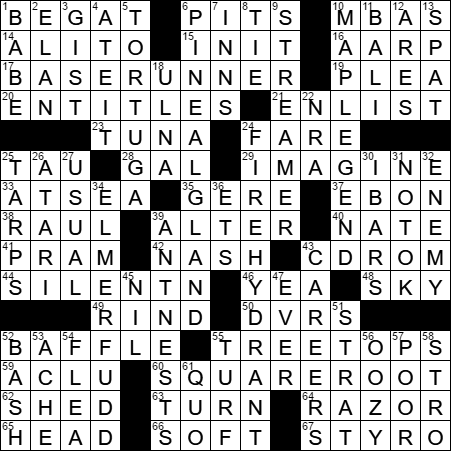 Each of today’s themed answers is in the down-direction, with a type of TREE on the TOP:

A US pint is made from 16 fluid ounces, and an imperial pint is 20 fluid ounces. The term “pint” comes into English via Old French, ultimately from the Latin “picta” meaning “painted”. The name arose from a line painted on the side of a beer glass, marking a full measure of ale.

“An Officer and a Gentleman” is a 1982 film starring Richard Gere as a candidate in the US Navy flight school who meets up and falls in love with a local girl played by Debra Winger. Despite the love shown on the screen between the characters played by Gere and Winger, it is fairly well known that the two leading actors did not get on well at all during the making of the film. At one point, Winger referred publicly to Gere as a “brick wall”.

Nate Silver is a statistician who first gained notoriety by developing a forecasting system that predicted the future performance of baseball players. He then made a name for himself in the world of politics by predicting the outcome of the 2008 US presidential race at the website FiveThirtyEight.com. Silver successfully predicted the outcome of the election in 49 of the 50 states, missing out on Indiana, which Barack Obama won by less than 1% of the vote. Then, along came the 2012 presidential race, which so many pollsters got wrong …

Another word used in the UK that’s rarely used over here is “pram”, which in my day was the most common term for what is called a baby carriage in the US. “Pram” is short for “perambulator”.

The cow is of the bovine ilk;
One end is moo, the other, milk.

I don’t think my kids really know what a floppy disk is. A floppy disk is made up of a thin and flexible magnetic material that can store data, enclosed in a protective case. I’ve used 8-inch floppies in my time, and many 5.25-inch floppy disks. Until fairly recently, I had a desktop that would take 3.5-inch disks, although I think the last 3.5-inch floppy disappeared from the house several years ago …

There’s a silent letter N at the end of the word “solemn”.

Styrofoam is an extruded polystyrene foam made by The Dow Chemical Company. Styrofoam has loads of applications, including home insulation and use as a buoyancy aid. It is also formed into “peanuts” used as a packaging filler.

5. Haitian island whose name is Spanish for “turtle” : TORTUGA

Tortuga is a Haitian island located off the northwest coast of Hispaniola. The island was used as a major base of operations for Caribbean pirates in the mid- to late-17th century. “Tortuga” is Spanish for “turtle”.

6. Brain part that produces melatonin : PINEAL GLAND (has “pine” at the top)

The pineal gland is a small gland located in the epithalamus, near the center of the brain. The gland gets its name from its shape, like a tiny pine cone. The pineal gland produces melatonin, a hormone that helps maintain our circadian rhythm, so varying levels of melatonin control our sleep-wake cycle.

Centipede is an arcade game from Atari (it was my favorite!). The game was designed by Ed Logg and Dona Bailey, with Bailey being one of the few female game designers back then (it was released in 1980). Perhaps due to her influence, Centipede was the first arcade game to garner a significant female following.

Back in the colony of Massachusetts Bay, the local militia was made up of all the able-bodied males in the colony who were aged between 16 and 60. These men were called to service only when necessary. Some of the men in towns around the colony were trained for rapid deployment, and were known as “minutemen”.

Here in the US, we refer to the British soldiers fighting in the revolutionary war as “Redcoats”, a reference to the color of their uniforms. Nowadays in the British Army, the red tunic is reserved only for ceremonial purposes. The vivid color proved to be a detriment after the invention of the rifle.

43. Board game with an “Unemployment Office” corner : CAREERS

Careers is a board game that Parker Brothers introduced in 1955. Believe it or not, Careers was initially sold at the price of $2.95!

47. Penultimate word of many fairy tales : EVER

… and they all lived happy ever after.

The Stratocaster (often “Strat”) is an electric guitar made by Fender since 1954. The company that made Fender electric guitars was founded in Fullerton, California in 1946 by Leo Fender.

“Shindig” is such a lovely word, I think, describing a party that usually includes some dancing. Although its origin isn’t really clear, the term perhaps comes from “shinty”, a Scottish game that’s similar to field hockey.

“Status quo” translates from Latin as “state in which”, and in English is used to mean the existing condition or state of affairs.

33. In unfamiliar territory : AT SEA

5. Haitian island whose name is Spanish for “turtle” : TORTUGA

6. Brain part that produces melatonin : PINEAL GLAND (has “pine” at the top)

24. Reason for a parking restriction : FIRE HYDRANT (has “fir” at the top)

43. Board game with an “Unemployment Office” corner : CAREERS

47. Penultimate word of many fairy tales : EVER