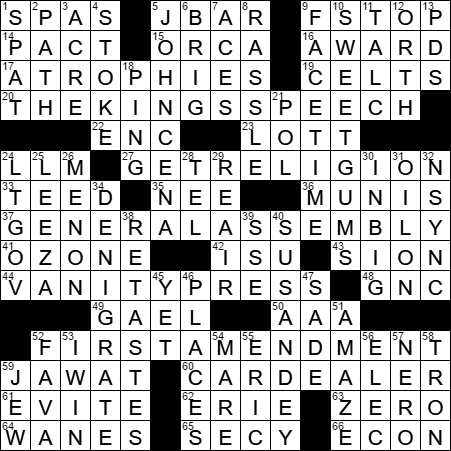 Each of today’s themed answers ends with a freedom protected by the FIRST AMENDMENT of the US Constitution:

A T-bar is a type of ski lift on which the skiers are pulled up the hill in pairs, with each pair standing (not sitting!) either side of T-shaped metal bar. The bar is placed behind the thighs, pulling along the skiers as they remain standing on their skis (hopefully!). There’s also a J-bar, a similar device, but with each J-shaped bar used by one skier at a time.

“The King’s Speech” is a wonderful, wonderful 2010 film about King George VI and his efforts to overcome his speech impediment. Colin Firth, Geoffrey Rush and Helena Bonham Carter all do fabulous jobs playing the lead characters. It is an independent film, so was made with a relatively low budget of $15 million, but grossed almost $400 million at box offices worldwide. “The King’s Speech” is the most successful British independent film of all time.

Trent Lott is a political figure who first went to Washington to work as an administrative assistant to Representative William M. Colmer, from Mississippi. After four years working for Colmer, Lott ran for the House seat that Colmer was to leave vacant on his retirement. Colmer endorsed Lott in that election, even though Colmer was a Democrat and Lott ran as a Republican. Lott won the race very handily, launching a 35-year career representing his home state of Mississippi in both the House and the Senate. Lott eventually ran into trouble for remarks he made that were interpreted as being racially motivated, and ended up resigning in 2007.

The advanced degree of Master of Laws is commonly abbreviated to “LL.M”, a shortening of the Latin term “Legum Magister” meaning “Master of Laws”.

The law degree abbreviated to J.D. is more fully known as Juris Doctor.

A municipal bond (muni) is one that is issued by a city or local government, or some similar agency. Munis have an advantage over other investments in that any interest earned on the bond is usually exempt from state and federal income taxes.

Chlorofluorocarbons (CFCs) are the propellants that were once used in aerosols. CFCs make their way up into the ozone layer and trigger a chain reaction that converts ozone (O3) into regular oxygen (O2). That conversion creates “holes” in the ozone layer. Regular O2 is good stuff, but we need O3 to absorb harmful UV radiation raining down on us. CFC is not good stuff …

Pocatello is a city in the southeast of Idaho. It is home to Idaho State University (ISU). The city was founded as a railroad stop in the days of the gold rush. Pocatello was named for the chief of the Shoshone tribe who granted the right of way for the railroad to pass through the nearby Fort Hall Indian Reservation.

The Priory of Sion is presented in the preface of Dan Brown’s novel “The Da Vinci Code” as a secret society that did in fact exist. However, there is a lot of evidence that the priory was an invention, created in forged documents in the sixties. Regardless, Dan Brown’s book is a really enjoyable read, in my humble opinion …

A vanity press is a publishing house in which authors pay to have their works published.

52. Source of the freedoms found at the ends of this puzzle’s four other longest answers : FIRST AMENDMENT

Pelee Island in Lake Erie is the southernmost populated point in the whole of Canada.

A pair of aces are referred to as pocket rockets, particularly when holding them in the hand (the pocket) in the popular variant of poker known as Texas hold ‘em. The term “rockets” is used as the letters A written side-by-side look like two small rockets on the launchpad (AA).

FaceTime is an Apple video-telephony application. I guess it’s similar to Skype. Personally, I gave up on Skype and am now a loyal user of Google Hangouts …

The sweetgum tree is named for the sweet resinous sap that is exuded when the trunk is cut. The scientific name for the tree’s genus is Liquidambar, which is also a reference to the sap.

Pinging is also known as “engine knocking”. It is a metallic sound, created when not all of the fuel-air mixture is detonated by the spark plug, with some of it detonated late in the cycle. The late detonation causes the knocking/pinging sound. Additives (anti-knock agents) in gasoline can help reduce the chances of pinging.

The actress Susan Dey first appeared on “The Partridge Family” when she was 17-years-old when she had no acting experience. Years later, Dey won a Golden Globe for playing the leading role of Grace Van Owen in “L. A. Law”.

Take your places on the stage, everyone!

52. Source of the freedoms found at the ends of this puzzle’s four other longest answers : FIRST AMENDMENT