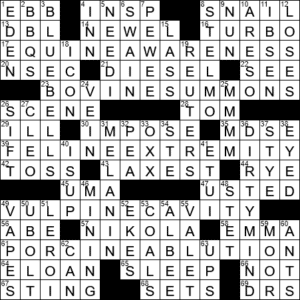 Today’s Theme (according to Bill): Mammalian

Themed clues are well-known words or phrases that start with an animal. Each is reinterpreted literally:

In baseball, a two-bagger is a double (dbl.), a hit that gets the batter onto second base.

In a turbojet engine, it’s the expanding exhaust gases expelled from the rear of the engine that provide thrust. In a turboprop engine, on the other hand, the energy from the turbine energy is used to drive a propeller via a gearbox.

The “pig” mentioned in the rhyme isn’t actually a live animal but rather a small pastry with an apple filling.

“¿Cómo está usted?” is the more formal way of asking “How are you?” in Spanish.

Ablution is the cleansing of the body, especially as part of a religious rite.

O sleep, O gentle sleep, Nature’s soft nurse, how have I frightened thee. That thou no more will weigh my eyelids down, And steep my senses in forgetfulness?

6 Suffix with boat or cox : -SWAIN

The coxswain of a boat is one in charge of steering and navigation. The word “coxswain” is shortened to “cox”, particularly when used for the person steering and calling out the stroke in a competition rowing boat.

A pewee is a small bird, so called because of the “pee wee” sound that it makes.

Cloisters are usually such beautifully peaceful areas. They are found as part of religious buildings in particular. Cloisters are rectangular open spaces surrounded by covered walkways that are attached to other structures. The use of the term “cloister” has evolved to also describe a monastery or convent.

The Reuters news agency was formed way back in 1851 by German-born, British entrepreneur Paul Julius Reuter. Reuter had checked the feasibility of a news service for a couple of years prior to launching the agency, and the technologies he used for his study were the telegraph and carrier pigeons!

Melanin is a natural pigment found in most organisms. In humans, melanin is the pigment in the skin, the production of which accelerates in response to UV radiation causing a “tan”. Melanin is also what is released as cephalopod ink, a defensive cloud squirted into the water by squids and octopodes.

The company that is now called 3M was founded as a mining venture in 1902, and used to be known as the Minnesota Mining and Manufacturing Company (hence the name “3M”).

“Who’s Afraid of Virginia Woolf?” is an Edward Albee play that premiered on Broadway in 1962. The play won a Tony in 1963, and was adapted into a successful film in 1966 starring Richard Burton, Elizabeth Taylor, George Segal and Sandy Dennis. The stage version is a lengthy production lasting over three hours.