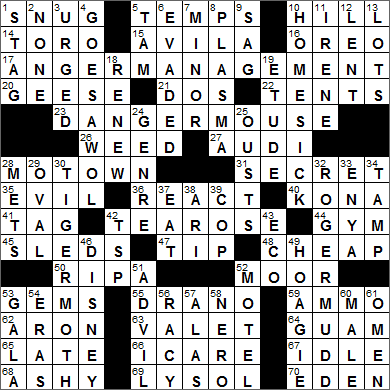 69A. Popular disinfectant brand that fights what’s hidden in the answers to starred clues LYSOL

Today’s Wiki-est, Amazonian Googlies
Across
14. Snapper rival TORO
Toro is a manufacturer of mainly lawn mowers and snow removal equipment based in Bloomington, Minnesota. The company was started in 1914 to build tractor engines.

Snapper is a manufacturer of lawnmowers and snow removal equipment. The company was founded as Southern Saw Works in 1894 and the first lawnmower produced was called the “Snappin’ Turtle”. The inventor gave it that name because he felt that the mower “snapped” the grass, and he installed a turtle figurine on the front of the first model that was sold.

15. Walled Spanish city AVILA
Avila is famous for the walled defenses around the old city, which date back to 1090. They were constructed out of brown granite, and are still in excellent repair. There are nine gateways and eighty-towers in all. Even the cathedral built between the 12th and 14th centuries is part of the city’s defenses, so it looks like an imposing fortress.

16. Cookie that has its own day every March 6 OREO
National Oreo Cookie Day is March 6th each year. There is an urban legend that the particular day was chosen as this was the day that the name “Oreo” was registered as a trademark. However, that’s not the case. The application was filed on March 14, 1912 and registration took place on August 12, 1913. So, who knows why it’s March 6th?

23. *Toon rodent superhero with a hamster assistant named Penfold DANGER MOUSE
“Danger Mouse” was a cartoon series from England in which the title character works as a secret agent. Danger Mouse was voiced by comic actor David Jason, star of the hit Britcom “Only Fools and Horses”.

28. Detroit record label MOTOWN
Motown Records is a record label that was founded in 1959 in Detroit (aka “Motor City” or “Motown”). The founder of Motown records was Berry Gordy, Jr.

40. Big Island coffee region KONA
Kona coffee is cultivated on the Big Island of Hawaii, on the slopes of Mauna Loa and Hualalai, two of the five active volcanoes on the island. Coffee plants were brought to Kona in 1828 and late in the 19th century, coffee became a viable and worthwhile crop. Today Kona is a one of the most expensive and popular coffees in the world.

42. Floral industry hybrid TEA ROSE
The first tea roses were so called because they had a fragrance reminiscent of Chinese black tea.

50. TV host Kelly RIPA
When Kelly Ripa secured the co-host spot on morning television with Regis Philbin, she was still acting in “All My Children” in a role she had been playing for over ten years. After a year of holding down two jobs, she eventually gave up the acting job.

55. Pipe cleaner DRANO
To clean out drains we might buy Crystal Drano which is sodium hydroxide (lye) mixed with sodium nitrate, sodium chloride (table salt) and aluminum. The contents of Drano work in concert to clear the clog. The lye reacts with any fats creating soap which may be enough to break up the clog. Also, the finely-divided aluminum reacts with water creating tremendous heat so that that mixture boils and churns, then any hair or fibers are cut by the sharp edges of the nitrate and chloride crystals. Having said all that, I find that boiling water poured down the drain almost always does the job …

59. Magazine contents AMMO
The word “munitions” describes materials and equipment used in war. The term derives from the Latin “munitionem” meaning “fortification, defensive wall”. Back in the 17th century, French soldiers referred to such materials as “la munition”, a Middle French term. This was misheard as “l’ammunition”, and as a result, we ended up importing the word “ammunition” into English, a term that we now use mainly to describe the material fired from a weapon.

62. Graceland middle name ARON
Elvis Aron Presley (aka “the King”) was the younger of two identical twins. His brother was stillborn, delivered 35 minutes before Elvis. The brother was named Jesse Garon Presley. So, although born a twin, Elvis was raised as an only child.

64. U.S. territory since the Spanish-American War GUAM
Guam is a US territory in the western Pacific Ocean, the largest of the Mariana Islands. Guam is also the first territory in the United States to see the sun rise on any particular day. As such, the territory has adopted the motto, “Where America’s day begins”. During WWII, the US territory of Guam was occupied by the Japanese for 31 months until it was liberated in the Battle of Guam in July 1944. Of the 18,000 Japanese men holding the island, only 485 surrendered, so almost all perished in the invasion. One Japanese sergeant hid out on the island for an incredible 28 years, finally surrendering in 1972!

69. Popular disinfectant brand that fights what’s hidden in the answers to starred clues LYSOL
The disinfectant called Lysol takes its name from the words “lysosome” and “solvent”. Lysosomes are structures found within cells that have the job of breaking up waste material and cellular debris.

70. Paradise EDEN
According to the Book of Genesis, Adam and Eve lived in a garden “in” Eden, with Eden being geographically located by reference to four rivers including the Tigris and the Euphrates. Some scholars hypothesize that Eden was located in Mesopotamia, which encompasses much of modern-day Iraq.

Down
2. What the fourth little piggy had NONE

4. Risks being caught off base GOES AWOL
The Military Police (MPs) often track down personnel who go AWOL (absent without leave).

5. Tartan topper TAM
A tam o’shanter is a man’s cap traditionally worn by Scotsmen. “Tams” were originally all blue (and called “blue bonnets”), but as more dyes became readily available they became more colorful. The name of the cap comes from the title character of Robert Burns’ poem “Tam O’Shanter”.

8. Flat panel TV type PLASMA
Plasma televisions are so called because the screen is made up tiny cells containing electrically charged ionized gases (plasmas). Each of the cells is effectively a tiny fluorescent lamp.

11. Dancer Castle IRENE
Vernon and Irene Castle were a husband-wife team of ballroom dancers who regularly performed on Broadway at the start of the 20th century. The Castles have been credited with creating or at least popularizing the dance called the “foxtrot”.

12. Period of sacrifice LENT
In Latin, the Christian season that is now called Lent was termed “quadragesima” (meaning “fortieth”), a reference to the forty days that Jesus spent in the desert before beginning his public ministry. When the church began its move in the Middle Ages towards using the vernacular, the term “Lent” was introduced. “Lent” comes from “lenz”, the German word for “spring”.

19. Piano showpiece ETUDE
An étude is a short instrumental composition that is usually quite hard to play and is intended to help the performer master a particular technique. “Étude” is the French word for “study”. Études are commonly performed on the piano.

28. Citi Field squad METS
Citi Field is the relatively new baseball stadium used by the New York Mets, and sits right next door to Shea stadium, where the Mets had played for decades. And the name of the facility comes from sponsor Citigroup.

32. *CBS weekend anchor during the Cronkite era ROGER MUDD
After a career with CBS and NBC, Roger Mudd was more recently an anchor for the History Channel. Mudd is perhaps best known for his 1979 interview with Senator Edward Kennedy. Ted Kennedy’s lackluster responses to some of Mudd’s questions were cited as the reason support plummeted for the senator’s 1980 Presidential nomination.

The broadcast journalist Walter Cronkite was the anchor of the “CBS Evening News” for 19 years, from 1962 to 1981. Cronkite’s famous sign-off line was “And that’s the way it is …” Cronkite made many famous broadcasts, including coverage of the assassination of President John F. Kennedy and the Moon landings. Cronkite was so closely associated with the Apollo space missions that he was presented with a Moon rock, making him the only non-NASA person to be so honored.

33. One-named Irish singer ENYA
Enya’s real name is Eithne Ní Bhraonáin, which can translate from Irish into Enya Brennan. Her Donegal family (in the northwest of Ireland) formed a band called Clannad, which included Enya. In 1980 Enya launched her very successful solo career. She sure does turn up a lot in crosswords!

34. Pack (down) TAMP
“Tamp” means to pack down tightly by tapping. “Tamp” was originally used to specifically describe the action of packing down sand or dirt around an explosive prior to detonation.

38. Former press secretary Fleischer ARI
Ari Fleischer was the White House Press Secretary for President George W. Bush. Fleischer now runs his own media consulting firm that specializes in representing sports players and organizations. Fleischer helped Mark McGwire handle the media when he had to admit to the use of steroids, and was briefly hired by Tiger Woods as he planned his return to the PGA after dropping out of the spotlight to handle the problems in his personal life.

39. Arresting figure? COP
“To cop” was northern British dialect for “to seize, catch”. This verb evolved in the noun “copper”, describing a policeman, someone who catches criminals. “Copper” is often shortened to “cop”.

49. Sub in Philly HOAGIE
Hoagy is another name for a submarine sandwich. The term “hoagy” (or hoagie) originated in Philadelphia, apparently introduced by Italians working in the shipyards during WWI. The shipyards were located on Hog Island, and the sandwich was first called the Hog Island, which morphed into the hoagy.

52. “Psycho” setting MOTEL
The classic Alfred Hitchcock suspense film “Psycho” released in 1960 is based on a 1959 novel of the same name by Robert Bloch. The Bloch novel in turn is loosely based on actual crimes committed by murderer and grave robber Ed Gein. When “Psycho” was making its initial run in theaters, latecomers were not granted admission, a policy instigated by Hitchcock himself. He felt that anyone missing the opening scenes would not enjoy the film.

58. Detective Wolfe NERO
Nero Wolfe is a fictional detective and the hero of many stories published by author Rex Stout. There are 33 Nero Wolfe novels for us to read, and 39 short stories. There are also movie adaptations of two of the novels: “Meet Nero Wolfe” (1936) which features a young Rita Hayworth, and “The League of Frightened Men” (1937). One of Wolfe’s endearing traits is his love of good food and beer, so he is a pretty rotund character.