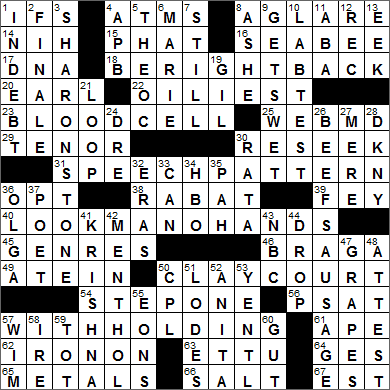 CROSSWORD SETTER: Mark Bickham
THEME: Withholding … each of today’s themed answers ends with a word that often is seen WITH the word HOLDING:

57A. Type of tax … or how the ends of the other five longest across answers might be seen? WITHHOLDING

Today’s Wiki-est, Amazonian Googlies
Across
4. Casino conveniences ATMS
The “casino” originated in the 1700s, first describing a public room for music or dancing. The name “casino” is a diminutive of “casa” meaning “house”.

16. Military builder SEABEE
The Seabees are members of the Construction Battalions (CB) of the US Navy, from which the name “Seabee” originates. There’s a great 1944 movie called “The Fighting Seabees” starring John Wayne that tells the story of the birth of the Seabees during WWII. The Seabees’ official motto is “Construimus. Batuimus”, Latin for “We build. We fight.” The group’s unofficial motto is “Can Do!”

20. Banjo virtuoso Scruggs EARL
Earl Scruggs and Lester Flatt are the musicians who founded the bluegrass band called the Foggy Mountain Boys in 1948.

23. It can be white or red BLOOD CELL (giving “holding cell”)
White blood cells protect the body against infection and are part of the immune system. They are formed in the bone marrow and are found mainly in the blood and lymphatic systems. White blood cells are also known as leukocytes, from the Greek “leuko-” meaning “white”.

Red blood cells are what give blood its color, and are responsible for carrying oxygen from the lungs to the body tissues. They are rich in the iron-containing biomolecule hemoglobin, which binds the oxygen, and thereby giving the cell the red color. Red blood cells are also known as erythrocytes, from the Greek “erythros” meaning “red”.

25. “Better information. Better health” resource WEBMD
WebMD is a website containing health information that has been online since 1996. WebMD is read by over 80 million readers each month.

29. Barbershop voice TENOR
Barbershop music is played in the a cappella style, meaning that it is unaccompanied vocal music. Barbershop music originated in the African American communities in the South, as gospel quartets often gathered in neighborhood barber shops to sing together.

38. Capital near Casablanca RABAT
Rabat is the capital city of the Kingdom of Morocco. After WWII, the United States maintained a major Air Force Base in Rabat, part of Strategic Air Command (SAC). Responding to pressure from the Moroccan government of King Mohammed V, the USAF pulled out in 1963.

39. “30 Rock” star FEY
Comic actress Tina Fey has a scar on her face a few inches long on her left cheek, which I was shocked to learn was caused by a childhood “slashing” incident. When she was just five years old and playing in the front yard of her house, someone just came up to her and slashed her with a knife. How despicable!

46. Actress Sonia BRAGA
Sonia Braga achieved fame in her native Brazil playing the title role in the movie “Gabriela”. There followed roles in American films such as “Kiss of the Spider Woman” and “The Milagro Beanfield War”. She has also played in the Portuguese version of “Desperate Housewives”.

62. Jeans appliqué IRON-ON
An “appliqué” is a small ornamental design that is applied to a surface. Appliqués are often applied to textiles, but also to other surfaces such as ceramics. “Appliqué” is French for “applied”.

63. Words to a double-crosser ET TU
It was Shakespeare who popularized the words “Et tu, Brute?” (And you, Brutus?), in his play “Julius Caesar”, although the phrase had been around long before he penned his drama. It’s not known what Julius Caesar actually said in real life just before he was assassinated on the steps of the Senate in Rome.

65. Nickel and cadmium METALS
Nickel is a silver-white metal. It is thought that the Earth’s core is largely made of a mixture of iron and nickel. The metal’s name comes from German mythology, in which Nickel (equivalent to “Old Nick”) was a mischievous sprite. When German copper miners found nickel-containing ore that resembled ore rich in copper, they blamed Nickel for the fact that they could not extract any copper.

Cadmium is a soft, bluish-white metal, a chemical element with the symbol Cd. Cadmium was discovered in 1817 and is named for Cadmus, the mythological founder of the Greek city of Thebes.

4. BOLO equivalent APB
A BOLO is a police alert, an acronym standing for “be on the look-out”. A BOLO can also be called an APB, an “all-points bulletin”.

6. Callender in the food business MARIE
Marie Callender’s is a restaurant chain found mainly in California. The chain was started by Don Callender in Orange, California in 1948 as a retail outlet for selling mainly pies. Don named the store for his mother Marie, who had baked and sold pies for many years to make some extra money for the family.

8. “A Hard Road to Glory” writer ASHE
Arthur Ashe was a professional tennis player from Richmond, Virginia. In his youth, Ashe found himself having to travel great distances to play against Caucasian opponents due to the segregation that still existed in his home state. He was rewarded for his dedication by being selected for the 1963 US Davis Cup team, the first African American player to be so honored. Ashe continued to run into trouble because of his ethnicity though, and in 1968 was denied entry into South Africa to play in the South African Open. In 1979 Ashe suffered a heart attack and had bypass surgery, with follow-up surgery four years later during which he contracted HIV from blood transfusions. Ashe passed away in 1993 due to complications from AIDS. Shortly afterwards, Ashe was posthumously awarded the Presidential Medal of Freedom by President Bill Clinton.

12. DirecTV remote button REC
DirecTV is a company providing television and audio programming via satellite. The company was founded in 1985 as Hughes Electronics Corporation, and became DirecTV in 1990.

19. Hodges of the Dodgers GIL
Gil Hodges was a professional baseball player and manager. Perhaps Hodges’ most celebrated achievement was managing the New York Mets team (the “Miracle Mets”) that won the 1969 World Series. Hodges died from a heart attack just a few years later in 1972, when he was only 48 years old.

21. Chicago area, with “the” LOOP
The historic commercial center of Chicago is known as the Loop. One theory is that the “loop” got its name from the cable loops in the city’s old cable car system.

24. Dr. who founded the Aftermath label DRE
Dr. Dre is the stage name of rapper Andre Romelle Young. Dr. Dre is known for his own singing career as well as for producing records and starting the careers of others such Snoop Dogg, Eminem and 50 Cent.

26. Link often smoked BEEF SAUSAGE
Link sausages are so called as they can come in chains, with each sausage being a link in that chain.

28. High-fashion letters DKNY
Donna Karan is an American fashion designer, creator of the Donna Karan New York (DKNY) clothing label. Karan was very much raised in the fashion industry, as her mother was a model and her stepfather a tailor.

34. “True Detective” network HBO
“True Detective” is a crime drama made by HBO that has an interesting format. Each series has its own narrative and cast. The show seems to be attracting some great actors. The first season was led by Matthew McConaughey and Woody Harrelson, and the second by Colin Farrell and Rachel McAdams.

36. 10th-century Russian Orthodox saint OLGA
St. Olga of Kiev was actually a ruler of the Medieval state of Rus (located in Eastern Europe) from 945 – 963 AD. By all accounts, Olga was a brutal woman in the early days of her reign. She came to power after her husband’s assassination and ruled as regent, acting for their son. She carried out terrible acts of vengeance on those responsible for her husband’s death. Later in her rule, she converted to Christianity. She was eventually proclaimed a saint for her efforts to spread the Christian religion in Rus.

41. Avatar of Vishnu KRISHNA
Krishna is recognized as the eighth avatar (incarnation) of Lord Vishnu in the Hindu tradition.

42. Lozenge flavor MENTHOL
Back in the 14th century, a “lozenge” was a diamond shape. The original lozenges that were tablets, held in the mouth to dissolve, had this diamond shape, hence the name.

43. “30 Rock” network NBC
The National Broadcasting Company (NBC) has had a number of different logos in its history, including the famous peacock with which we are familiar today. The first peacock logo was introduced in the early days of color television and was designed to illustrate how wonderful color television would be, so go buy one! (NBC was owned by RCA, and so had a vested interest in sales of color television sets).

51. Rich veins LODES
A lode is a metal ore deposit that’s found between two layers of rock or in a fissure. The “mother lode” is the principal deposit in a mine, usually of gold or silver. “Mother lode” is probably a translation of “veta madre”, an expression used in mining in Mexico.

53. 1983 Streisand film YENTL
“Yentl” is a play that opened in New York City in 1975. The move to adapt the play for the big screen was led by Barbara Streisand, and indeed she wrote the first outline of a musical version herself as far back as 1968. The film was eventually made and released in 1983, with Streisand performing the lead role.

55. Geologic periods EONS
Geological time is divided into a number of units of varying lengths. These are, starting from the largest:

57. Director Wenders WIM
Wim Wenders is a German movie director and producer. Wenders has served as the president of the European Film Academy in Berlin since 1996.

59. Tater __ TOT
Ore-Ida’s founders came up with the idea for Tater Tots when they were deciding what to do with residual cuts of potato. They chopped up the leftovers, added flour and seasoning, and extruded the mix through a large hole making a sausage that they cut into small cylinders. We eat 70 million pounds of this extruded potato every year!