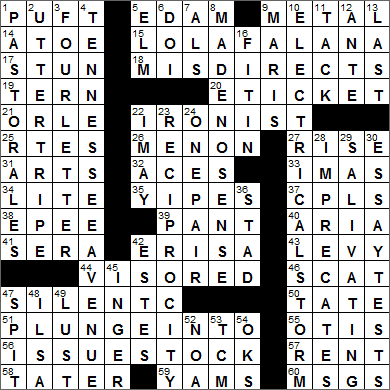 Today’s Wiki-est, Amazonian Googlies
Across
1. Stay __ Marshmallow Man: “Ghostbusters” icon PUFT
The Stay Puft Marshmallow Man is a character in the 1984 film “Ghostbusters”. He is a giant paranormal being who lumbers down the streets of New York City destroying everything in his path.

5. Mild cheese EDAM
Edam cheese takes its name from the Dutch town of Edam in North Holland. The cheese is famous for its coating of red paraffin wax, a layer of protection that helps Edam travel well and prevents spoiling. You might occasionally come across an Edam cheese that is coated in black wax. The black color indicates that the underlying cheese has been aged for a minimum of 17 weeks.

15. Dancer who appeared in “Golden Boy” after being discovered by Sammy Davis Jr. LOLA FALANA
Lola Falana is a singer, dancer and actress who grew up in Philadelphia. In the sixties Falana had an affair with, and later became good friends with, Sammy Davis Jr. Davis helped get her act into Las Vegas where she was very successful, eventually earning Falana the nickname “Queen of Las Vegas”. With her success came money, and so she became the highest paid female performer in Vegas at that time. Sadly, Falana suffers from multiple sclerosis, a disease that forced her to cut short her career as an entertainer.

Clifford Odets was a playwright, screenwriter and director from Philadelphia. “Golden Boy” was a play written by Odets that was first performed in 1937 on Broadway. There was a film adaptation released in 1939 that starred a young William Holden. “Golden Boy” was the film that launched Holden’s career. There was also a 1964 musical of the same name that was based on the play.

19. Shore bird TERN
Terns are seabirds that are found all over the world. The Arctic Tern makes a very long-distance migration. One Arctic Tern that was tagged as a chick in Great Britain in the summer of 1982, was spotted in Melbourne, Australia just three months later. The bird had traveled over 14,000 miles in over those three months, an average of about 150 miles a day. Remarkable …

21. Heraldic band ORLE
In heraldry, an orle is a decorative band that lies close to the edge of the front-surface of a shield. With such a design, the orle necessarily takes on the shape of the shield.

22. O. Henry, for one IRONIST
O. Henry was the pen name of writer William Sydney Porter from Greensboro, North Carolina. O. Henry is famous for his witty short stories that have a clever twist in the tail.

25. Their nos. might appear on shields RTES
The use of a “shield” for US route markers was decided upon in 1925, and the first markers were installed in 1926. The shield shape was inspired by the Great Seal of the United States.

The 1949 Rodgers and Hammerstein musical “South Pacific” is based on stories from the 1947 book “Tales of the South Pacific” by James A. Michener. “South Pacific” really is a classic show, featuring some classic songs like “Bali Ha’i”, “I’m Gonna Wash That Man Right Outa My Hair”, “Some Enchanted Evening” and “Happy Talk”.

38. Sport for people in suits EPEE
In the sport of épée fencing, a double-touch is scored when two touches are registered almost at the same time.

41. Medical supplies SERA
Blood serum is the clear, yellowish part of blood i.e. that part which is neither a blood cell or a clotting factor. Included in blood serum are antibodies, the proteins that are central to our immune system. Blood serum from animals that have immunity to some disease can be transferred to another individual, hence providing that second individual with some level of immunity. Blood serum used to pass on immunity can be called “antiserum”.

42. Pension law acronym ERISA
ERISA is the Employee Retirement Income Security Act, enacted in 1974. ERISA regulates the operation of a pension plan once it has been established. However, ERISA does not require that a pension plan be offered by an employer.

46. Style for jazzman Crothers SCAT
Scat singing is a vocal improvisation found in the world of jazz. There aren’t any words as such in scat singing, just random nonsense syllables made up on the spot.

Scatman Crothers was a jazz musician who is perhaps best remembered for playing Louie the Garbage Man on the seventies sitcom “Chico and the Man”.

47. Indictment feature? SILENT C
The letter C in the word “indictment” is silent.

50. Thames museum TATE
The museum known as “the Tate” is actually made up of four separate galleries in England. The original Tate gallery was founded by Sir Henry Tate as the National Gallery of British Art. It is located on Millbank in London, on the site of the old Millbank Prison, and is now called Tate Britain. There is also the Tate Liverpool in the north of England located in an old warehouse, and the Tate St. Ives in the west country located in an old gas works. My favorite of the Tate galleries is the Tate Modern which lies on the banks of the Thames in London. It’s a beautiful building, a converted power station that you have to see to believe.

55. Lex’s henchman in “Superman” films OTIS
Lex Luthor is the arch-nemesis of Superman in comics. Luthor has been portrayed in a number of guises in the comic world as well in movies and on the small screen. For example, he appeared as Atom Man in the 1950 film series “Atom Man vs. Superman”, and was played by actor Lyle Talbot, opposite Kirk Alyn’s Superman. Luthor was played by Gene Hackman in the 1978 movie “Superman”, alongside his bumbling henchman Otis, who was played by Ned Beatty.

56. Sell shares ISSUE STOCK
The “stock” of a company represents its ownership, and is partitioned into “shares”. Shares may be held privately, or traded publicly on an exchange. Existing shareholders can decide to dilute their ownership by offering more shares for sale, a step that is usually taken to raise capital for the company.

58. Spud TATER
The word “spud” is used as a slang term for a potato and was first recorded in the mid-1800s, in New Zealand would you believe?

59. Versatile tubers YAMS
Although in the US we sometimes refer to sweet potatoes as “yams”, the yam is actually a completely different family of plants. True yams are more common in other parts of the the world than they are in this country, and are especially found in Africa.

Down
1. Bucolic musical pieces PASTORALES
A pastorale is musical work that is intended to evoke a country scene. Pastorales sometimes achieve this by including existing rustic tunes as themes. The term ultimately comes from the Latin “pastoralis” meaning “of shepherds”.

The word “bucolic”, meaning rustic or rural, comes to us from the Greek word “boukolos” meaning “cowherd”.

2. Bosh UTTER TRIPE
“Tripe” is an informal term meaning “rubbish, of little value”. Tripe is actually the rubbery lining of say a cow, that in the UK is traditionally eaten with onions.

Our word “bosh” meaning nonsense came into English via a well-defined route. It was first used in the novel “Ayesha, the Maid of Kars” written by J. J. Morier in 1905, and is a Turkish word that literally translates as “empty”.

3. Offensive, perhaps FOUR-LETTER
It seems that many swear words happen to have four letters, and are usually monosyllabic. This led to the term “four-letter word” being used as a euphemism for a curse word, starting in the early twentieth century.

4. One of an orange trio TENNESSEE AVENUE
The street names in the US version of Monopoly are locations in or around Atlantic City, New Jersey, e.g. Tennessee Avenue and Vermont Avenue.

5. Common street name ELM
The most common street name in the US is “Second Street”. “First Street” comes in only at number three, and this is because many cities and towns forego the use of “First” and instead go with “Main” or something more historical in nature. “Elm Street” appears on the list at number fifteen.

7. Gore and more ALS
Former Vice President Al Gore was a joint recipient of the Nobel Peace Prize in 2007 in recognition for his work in climate change activism. He also won a Grammy for Best Spoken Word Album for his book on climate change called “An Inconvenient Truth”. The documentary of the same name that was spawned by the book won an Academy Award. In addition, Gore won an Emmy as co-owner of Current TV, an independent news network.

11. Sailor’s maneuver TACK
“To tack” is a sailing term, meaning to veer into and through the wind in order change course, resulting in the wind coming over the opposite side of the vessel after the tack is completed.

13. Not flag LAST
Our verb “to flag” meaning “to tire” was originally used in the sense of something flapping about lazily in the wind. From this it came to mean “to go limp, droop”, and then “to tire”.

24. Hold ’em holding ONE PAIR
The official birthplace of the incredibly popular poker game of Texas Hold ‘Em is Robstown, Texas where the game dates back to the early 1900s. The game was introduced into Las Vegas in 1967 by a group of Texan enthusiasts including Doyle Brunson, a champion often seen playing on TV today. Doyle Brunson published a poker strategy guide in 1978, and this really helped increase the popularity of the game. But it was the inclusion of Texas Hold ‘Em in the television line-up that really gave the game its explosive surge in popularity, with the size of the prize money just skyrocketing.

28. Curses IMPRECATES
Imprecation is the act of cursing, invoking or calling down evil.

42. Colorado’s __ Park ESTES
Estes Park is a town in a beautiful part of the US, in northern Colorado. Estes Park is home to the headquarters of Rocky Mountain National Park. My firefighter brother-in-law was based at that park, so I’ve visited and can attest that it is a gorgeous place to live. He lives in Omaha now. The geography in Omaha is a little different …

45. Actress Stevens INGER
Inger Stevens was an actress from Sweden who moved to New York City with her father when she was a girl. Stevens is probably best remembered for for playing the female lead in the sixties TV show “The Farmer’s Daughter”, appearing opposite William Windom.

48. To whom Rick said, “The Germans wore gray, you wore blue” ILSA
I love the words of one critic describing the chemistry between Bogart and Bergman in the film “Casablanca” … “she paints his face with her eyes”. Wow!

52. Tishby of “The Island” NOA
Noa Tishby is actress from Israel. Tishby’s best known film role was in the 2005 movie “The Island” in which she supported Ewan McGregor and Scarlett Johansson.

“The Island” is a 2005 sci-fi film about a man living in a compound who realizes that he is part of community of clones who are used for organ harvesting and surrogate motherhood. The two “lead” clones in the movie are Ewan McGregor and Scarlett Johansson. I haven’t seen “The Island” and hear it’s not that great, but the plot sounds intriguing …