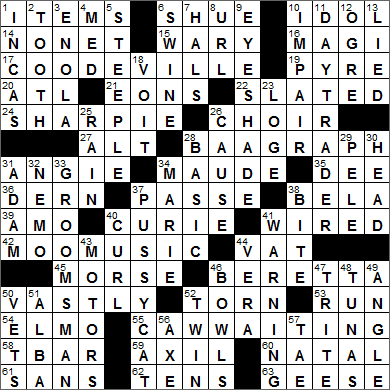 CROSSWORD SETTER: Timothy L. Meaker
THEME: Animal Sounds … each of today’s themed answers starts with a sound made by an animal. The answers are reminiscent of common phrases, with the first word “clipped” at the end:

Today’s Wiki-est, Amazonian Googlies
Across
1. Word seen before “or less” on supermarket signs ITEMS
Ten items or less in this lane …

6. Elisabeth of “Hollow Man” SHUE
Elisabeth Shue has always been a favorite actress of mine. She has been in several popular films including “The Karate Kid”, “Cocktail”, two of the “Back to the Future” movies, “Leaving Las Vegas”, and my personal favorite “Adventures in Babysitting”. More recently, Shue had a recurring role on the TV crime drama “CSI: Crime Scene Investigation”.

“Hollow Man” is a scary 2000 film starring Kevin Bacon as a scientist who becomes invisible and then embarks on a series of murders. The storyline was inspired by the famous H. G. Wells novel “The Invisible Man”.

10. “American __” IDOL
Fox’s “American Idol” is a spin-off show that was created after the amazing success of the British television show “Pop Idol”. I can’t abide either program(me) …

14. Musical ensemble NONET
A nonet is a piece of music requiring nine musicians for a performance. The term is also used for the group itself.

16. Gospel trio MAGI
“Magi” is the plural of the Latin word “magus”, a term applied to someone who was able to read the stars. Hence, magi is commonly used with reference to the “wise men from the East” who followed the star and visited Jesus soon after he was born.

20. NBA division that includes the Bklyn. Nets ATL
The NBA’s Brooklyn Nets until relatively recently were the New Jersey Nets based in Newark. Prior to 1977, the team was known as the New York Nets and played in various locations on Long Island. Ten years earlier, the Nets were called the New Jersey Americans and were headquartered in Teaneck, New Jersey.

22. On the agenda SLATED
An item that has “been slated” has been put on the agenda, scheduled. The term comes from the notion of writing something down on a slate board.

24. Autograph signer’s aid SHARPIE
Sharpie is a brand of pen.

31. 1973 Rolling Stones ballad ANGIE
For my money, “Angie” is the greatest ballad ever performed by the Rolling Stones. Despite rumors to the contrary, “Angie” doesn’t refer to a particular woman. If fact, songwriter Keith Richard says that “Angie” is a pseudonym for heroin, and the lyrics tell of his efforts to get off the drug at a detox facility in Switzerland.

36. “Coming Home” actor DERN
Bruce Dern is a Hollywood actor with quite a pedigree. Dern is the grandchild of former Utah governor and Secretary of War, George Henry Dern. Bruce’s godparents were Adlai Stevenson and Eleanor Roosevelt!

“Coming Home” is a 1978 movie about a love triangle between a young wife (Jane Fonda), her husband who is a US Marine (Bruce Dern), and a paralyzed Vietnam War veteran (Jon Voight).

37. Outmoded PASSE
“Passé” is a French word, meaning “past, faded”.

38. Co-star of Boris in “Son of Frankenstein” BELA
Bela Lugosi was a Hungarian stage and screen actor, best known for playing the title role in the 1931 film “Dracula” and for playing the same role on Broadway. Lugosi found himself typecast for the rest of his career and almost always played the role of the villain, often in horror movies. When he passed away in 1956, his wife had him buried in the costume he wore playing Count Dracula on Broadway.

Boris Karloff was the stage name of English actor William Henry Pratt. Karloff famously played the monster in a series of “Frankenstein” movies in the 1930s. Karloff also played the Grinch, and the narrator, in the oft-seen 1966 animated adaptation of Dr. Seuss’s “How the Grinch Stole Christmas!” that was made for television.

46. Longtime family-owned firearms company BERETTA
Beretta is an Italian manufacturer of firearms. Beretta is an incredibly old company that has been selling firearms since 1526! The company got a big boost of sales in the US in the eighties, when it’s Beretta 92 pistol was selected by the US Army for use as its service handgun (although it was known as the “M9 pistol by the US Army”).

54. Big Bird buddy ELMO
The man behind/under the character Elmo on “Sesame Street” is Kevin Clash. If you want to learn more about Elmo and Clash, you can watch the 2011 documentary “Being Elmo: A Puppeteer’s Journey”.

The much-loved Big Bird character on “Sesame Street” made a big splash in the 2012 US presidential election cycle. Candidate Mitt Romney took the position that even though he loved PBS and Big Bird, he wanted to stop funding public television. Big Bird appeared on an episode of “Saturday Night Live” soon afterwards and was asked how he found out that he’d been mentioned in the debate, to which he replied, “I got a million Tweets”.

58. Sight from a slope T-BAR
A T-bar is a type of ski lift in which the skiers are pulled up the hill in pairs, with each pair standing (not sitting!) either side of T-shaped metal bar. The bar is placed behind the thighs, pulling along the skiers as they remain standing on their skis (hopefully!). There’s also a J-bar, a similar device, but with each J-shaped bar used by one skier at a time.

59. Stem-to-branch angle AXIL
The axil is the upper angle between say a leaf stalk and the stem of a plant.

60. Like some astrological charts NATAL
A natal horoscope or natal chart is an astrological map that is built around the exact time and location of an individual’s birth. The chart shows the position of the astrologically relevant celestial bodies at that time.

Down
1. 16th-century conquest victims INCAS
The Inca people emerged as a tribe around the 12th century, in what today is southern Peru. The Incas developed a vast empire over the next 300 years, extending along most of the western side of South America. The Empire fell to the Spanish, finally dissolving in 1572 with the execution of Tupac Amaru, the last Incan Emperor.

7. Dutch artist Frans HALS
Frans Hals was a painter from the Dutch Golden Age who was born in Antwerp but who lived and worked in Haarlem. Hals is best known for his portraits, the most famous of which is probably “The Laughing Cavalier”.

11. Market speculator DAY-TRADER
A day-trader is an investor (of sorts), one who buys securities and sells them on the same day in an attempt to make a quick profit.

18. Sports ball brand VOIT
Voit is a sporting goods company that was founded by William J. Voit in 1922. Voit invented the first all-rubber inflatable ball, in the late twenties.

29. Mononymous kicker PELE
Pelé is the nickname of Edson de Nascimento, a soccer player who has used the name Pelé for most of his life. Pelé is now retired, and for my money was the world’s greatest ever player of the game. He is the only person to have been part of three World Cup winning squads, and is a national treasure in his native Brazil.

31. Start of a big race? ADAM
According to the Bible, Eve was created as Adam’s companion by God, creating her from Adam’s rib.

32. Nautilus skipper NEMO
In the 1954 movie version of “20,000 Leagues Under the Sea”, Captain Nemo goes down with his ship (the submarine Nautilus). In the novel by Jules Verne the fate of Nemo and his crew isn’t quite so cut and dry, although the inference is perhaps that they did indeed head for Davy Jones’ Locker.

34. With 40-Across, 1911 chemistry Nobelist MARIE
(40D. See 34-Down CURIE)
Marie Curie lived a life of firsts. She was the first female professor at the University of Paris, the first woman to win a Nobel Prize, and indeed was the first person to win two Nobel prizes (in 1903 and 1911). Most of Curie’s work was in the field of radioactivity, and was carried out in the days when the impact of excessive radiation on the human body was not understood. She died from aplastic anemia, caused by high exposure to radiation. To this day, Curie’s personal papers are kept preserved in lead-lined boxes as they are highly radioactive, even her personal cookbook.

38. Angler’s hope BITE
We use the verb “to angle” to mean “to fish” because “angel” was an Old English word for a hook.

40. Temple feature in old films CURL
The child star Shirley Temple made her first movie in 1932 at the age of three, then became a star 1934 in the film “Bright Eyes”. Temple retired from show business at the age of 22, but made a brief attempt to resume her career in the late fifties and early sixties. She served as a board member for several organizations, including the Walt Disney Company. She also ran unsuccessfully for the US Congress in 1874, but was appointed as US Ambassador to Ghana in 1974, and then to Czechoslovakia in 1989.

43. General __ MOTORS
General Motors (GM) is still the largest manufacturer of cars in the world, at least in terms of numbers of cars sold. GM was established in 1908 in Flint, Michigan as a holding company for Buick, which in turn had been founded in 1899. GM’s Buick brand is the oldest, still-active automotive brand in the US. The company filed for Chapter 11 bankruptcy protection in 2009, and emerged from that bankruptcy just one month later, with a lot of help from the US taxpayer. In order to do so, GM had to shut down its Hummer, Pontiac and Saturn operations. The revamped General Motors then had a huge Initial Public Offering in 2010 that raised $23 billion.

44. 2012-’13 “Bates Motel” Emmy nominee Farmiga VERA
My favorite performance by the film actress Vera Farmiga was in the 2009 film “Up in the Air”, in a supporting role to George Clooney, for which she was nominated for a Best Supporting Actress Oscar.

51. Goya’s “Duchess of __” ALBA
María Cayetana de Silva was the 13th duchess of Alba. She was a favorite subject of the Spanish painter Francisco Goya. The duchess is the subject in the famous portrait known as “The Naked Maja”, as well as “The Clothed Maja”. Goya also painted her in a 1797 work called “Mourning Portrait of the Duchess of Alba”, in which the 35-year-old lady is dressed in mourning attire following the death of her husband.

57. Menlo Park monogram TAE
Thomas Alva Edison (TAE) was nicknamed “The Wizard of Menlo Park” by a newspaper reporter, a name that stuck. He was indeed a wizard, in the sense that he was such a prolific inventor. The Menlo Park part of the moniker recognizes the location of his first research lab, in Menlo Park, New Jersey.