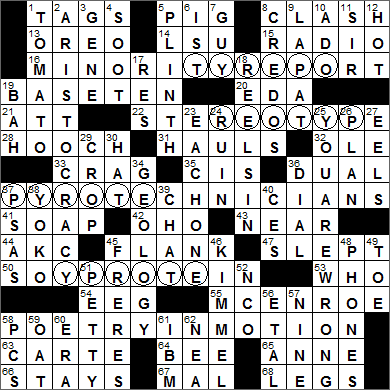 CROSSWORD SETTER: Jeffrey Wechsler
THEME: Poetry in Motion … each of today’s themed answers includes a hidden string of letters. That string of letters is P-O-E-T-R-Y, but in a different order, IN MOTION:

58A. Metaphor for ballet … or what this puzzle’s circles literally contain POETRY IN MOTION

The Grinch is the title character in Dr. Seuss’s 1957 children’s book “How the Grinch Stole Christmas!” Based on Seuss’s hero, we now use the term “grinch” for someone opposed to Christmas festivities or coarse and greedy in general.

13. Layered snack OREO
There’s an iPhone app featuring the Oreo cookie. It’s a game in which one twists Oreo cookies apart, “licks” the cream from the center and then dunks the remainder of the cookie in a glass of milk.

The great explorer Verrazzano gave the name “Arcadia” to the coastal land that stretched from north of present day Virginia right up the North American continent to Nova Scotia. The name Arcadia was chosen as it was also the name for a part of Greece that had been viewed as idyllic from the days of classical antiquity. The “Arcadia” name quickly evolved into the word “Acadia” that was used locally here in North America. Much of Acadia was settled by the French in the 1600s, and then in 1710 Acadia was conquered by the British. There followed the French and Indian War after which there was a mass migration of French Acadians, often via the French colony of Saint-Domingue (present-day Haiti) to the French colony of Louisiana. The local dialectic pronunciation of the word “Acadian” was “Cajun”, giving the name to the ethnic group for which Louisiana has been home for about 300 years.

P. G. T. Beauregard was a general in the Confederate Army during the Civil War. Beauregard’s most notable success was leading the defense of Petersburg, Virginia against vastly superior Union forces.

15. Crystal __ RADIO
A crystal radio is a passive receiver, meaning that it uses the power in the radio signal to produce sound and does not amplify that signal (it has no battery). The crystal in the radio acts as a primitive form of diode. The sound coming out of a crystal set is so low that you can only hear it with headphones.

20. Educator LeShan EDA
Eda LeShan wrote “When Your Child Drives You Crazy”, and was host of the PBS television show “How Do Your Children Grow?”

21. Fig. in TV’s “Suits” ATT
“Suits” is an entertaining show about two lawyers that has aired on the USA Network since 2011. I binge-watched the show on Amazon Prime not so long ago, and thoroughly enjoyed it.

28. Cheap sauce HOOCH
In the Klondike gold rush, a favorite tipple of the miners was “Hoochinoo”, a liquor made by the native Alaskans. Soon after “hooch” (also “hootch”) was adopted as a word for cheap whiskey.

35. Org. of former Soviet republics CIS
The Commonwealth of Independent States (CIS) is a loose association of countries that were former soviet republics. The CIS was formed in 1991 by Belarus, Russia and Ukraine, with six other states joining the alliance later.

41. It’s found in bars SOAP
Soap is basically made by adding a strong alkali (like lye) to a fat (like olive oil or palm oil). The fats break down in the basic solution in a process called saponification. The crude soap is extracted from the mixture, washed, purified and finished in molds.

50. Vegan diet component SOY PROTEIN
What are known as soybeans here in the US are called “soya beans” in most other English-speaking countries. So, I drink soy milk here in America, but when I am over in Ireland I drink “soya milk”.

53. “Quadrophenia” group, with “The” WHO
“Quadrophenia” was the second rock opera by the Who (“Tommy” being the first, and more famous).

54. Med. recording EEG
An electroencephalogram (EEG) is a record of electrical activity caused by the firing of neurons within the brain. The EEG might be used to diagnose epilepsy, or perhaps to determine if a patient is “brain dead”.

55. Four-time US Open winner MCENROE
Former tennis pro John McEnroe is known for his prowess on the court, as well his fiery temper. He was one of the great characters of his day, and had many grudge matches against the likes of Bjorn Borg, Jimmy Connors and Ivan Lendl. In 1984, McEnroe won 82 out of 85 matches, a winning record that still stands to this day.

63. Word on a menu CARTE
“Carte” is a word sometimes used in French for a menu. Menu items that are “à la carte” are priced and ordered separately, as opposed to “table d’hôte” which is a fixed price menu with limited choice.

64. One rarely without a comb? BEE
Honey bees create a structure within their nests called a honeycomb that is used to contain their larvae and also to store honey and pollen. The honeycomb comprises hexagonal cells made from wax.

67. Ware lead-in MAL-
“Malware” is a collective term for software and program code that is created to intentionally disrupt and exploit computer systems. Viruses, worms, trojan horses and spyware are all covered by the term. “Malware” is short for “malicious software”.

Down
2. Reign of Terror victims ARISTOCRACY
“Reign of Terror” is the name given to the violent months that marked the beginning of the French Revolution. The guillotine earned the nickname “the National Razor” during those days in 1793 and 1794, with tens of thousands of people losing their lives (and heads).

5. Public monument support PLINTH
A plinth is a block on which a column is based. The Greek word “plinthos” means “squared stone”.

8. Words to live by CREDOS
A creed or credo is a confession of faith, or a system of belief or principles. “Credo” is Latin for “I believe”.

11. Title for Edward Elgar SIR
Sir Edward Elgar was the quintessential English composer, inextricably associated with his “Pomp and Circumstance” marches (including “Land of Hope and Glory”) and the “Enigma Variations”.

17. __ judicata: decided case RES
“Res judicata” is a term used in the law for a decided case, which translates from Latin as “a matter already judged”.

36. Ivory alternative DIAL
Dial was the first antibacterial soap introduced in the US. It was given the name “Dial” as it was touted as offering “round-the-clock” protection against any odors caused by perspiration.

Ivory soap is one of Procter & Gambles oldest products, introduced way back in 1879. Ivory soap is noted for its “purity” and also because of its property of floating in water. Despite urban myths to the contrary, the property of floating in water was developed deliberately by a chemist at the time Ivory was being formulated. The soap floats because the ingredients are mixed longer than necessary for homogenization, which introduces more air into the product.

38. Mother of Sean YOKO
Sean Taro Ono Lennon is the only child of John Lennon and Yoko Ono. Sean’s godfather is Elton John. Sean is a musician and composer, and has a band called the Ghost of a Saber Tooth Tiger.

52. Sgt., e.g. NCO
An NCO is a non-commissioned officer in the armed forces. Usually such an officer is one who has earned his or her rank by promotion through the enlisted ranks. A good example would be a sergeant.

61. Longtime maker of 58-Down IBM
(58. See 61-Down PCS)
The original IBM Personal Computer is model number 5150, which was introduced to the world on August 12, 1981. The term “personal computer” was already in use, but the success of the IBM 5150 led to the term “PC” being used for all computer products compatible with the IBM platform.

62. Org. supporting exhibitions NEA
The National Endowment for the Arts (NEA) is an agency funded by the federal government that offers support and financing for artistic projects. The NEA was created by an Act of Congress in 1965. Between 1965 and 2008, the NEA awarded over $4 billion to the arts, with Congress authorizing around $170 million annually through the eighties and much of the nineties. That funding was cut to less than $100 million in the late nineties due to pressure from conservatives concerned about the use of funds, but it is now back over the $150 million mark. I wonder how long that will last though …