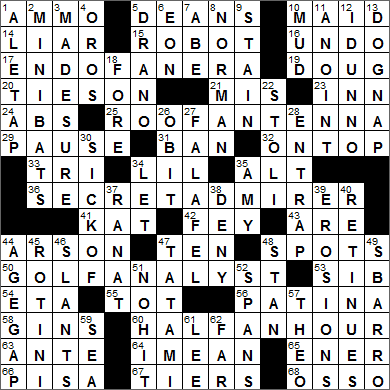 17A. Presidency’s last days, e.g. END OF AN ERA
25A. Pre-cable reception aid ROOF ANTENNA
50A. Commentator dissecting chips and putts GOLF ANALYST
60A. Usual sitcom length (including ads) HALF AN HOUR

Today’s Wiki-est, Amazonian Googlies
Across
19. ’90s TV title toon teen DOUG
“Doug” is a an animated television show for children that originally ran in the nineties. “Doug” was aired by Nickelodeon for the first few years, and was then acquired by Disney. The title character is 11-year-old Doug Funnie, an anxious boy with a vivid imagination.

24. Six-pack muscles ABS
The abdominal muscles (“abs”) are more correctly referred to as the rectus abdominis muscles. They are all called a “six-pack” in a person who has developed the muscles and who has low body fat. In my case, more like a keg …

25. Pre-cable reception aid ROOF ANTENNA
An antenna’s job is to convert electrical power into radio waves, and radio waves into an electrical signal. The first antennas were built by the German physicist Heinrich Hertz in 1888.

34. Rapper __ Kim LIL’
Lil’ Kim is the stage name of rap artist Kimberly Denise Jones from Brooklyn, New York. Lil’ Kim spent a year in jail in 2005 for lying to a jury in a case about a shooting.

35. PC key near Ctrl ALT
The Alt (alternate) key is found on either side of the space bar on US PC keyboards. The Alt key evolved from what was called a Meta key on old MIT keyboards, although the function has changed somewhat over the years. Alt is equivalent in many ways to the Option key on a Mac keyboard, and indeed the letters “Alt” have been printed on most Mac keyboards starting in the nineties.

41. Kit__: candy bar KAT
I grew up eating Kit Kat bars as a kid, as the chocolate confection has been around since the thirties. Kit Kats didn’t hit the shelves in the US until the seventies. I’ve seen new varieties of Kit Kat over in the UK, such as an orange-flavored version, but haven’t seen anything like that over here.

56. Green film on bronze PATINA
Patina is the oxide film that develops on brass and similar metals over time. It’s patina that make Lady Liberty the lovely green color that she is.

58. Clear liquors GINS
The spirit known as gin gets its unique flavor mainly from juniper berries. The name “gin” comes into English from the translation of “juniper” from either French (genièvre), Dutch (jenever) or Italian (ginepro).

65. Cabinet dept. concerned with nukes ENER
The US Department of Energy (DOE) came into being largely as a result of the 1973 oil crisis. The DOE was founded in 1977 by the Carter administration. The DOE is responsible for regulating the production of nuclear power, and it is also responsible for the nation’s nuclear weapons. The official DOE seal features symbols denoting five sources of energy: the sun, an atom, an oil derrick, a windmill and a dynamo.

66. Leaning Tower city PISA
The city of Pisa is right on the Italian coast, sitting at the mouth of the River Arno, and is famous for its Leaning Tower. The tower is actually the campanile (bell tower) of the city’s cathedral, and it has been leaning since it was completed in 1173. Just shows you how important good foundations are …

68. __ buco: veal dish OSSO
“Osso” is the Italian word for bone as in the name of the dish Osso Buco: braised veal shanks.

Down
4. Gold medals, to Spaniards OROS
In the Ancient Olympic Games, the winner of an event was awarded an olive wreath. When the games were revived in 1896, the winners were originally given a silver medal and an olive branch, with runners-up receiving a bronze medal and a laurel branch. The tradition of giving gold, silver and bronze medals began at the 1904 Summer Olympic Games held in St. Louis, Missouri.

5. Pipe clog dissolver DRANO
To clean out drains we might buy Crystal Drano which is sodium hydroxide (lye) mixed with sodium nitrate, sodium chloride (table salt) and aluminum. The contents of Drano work in concert to clear the clog. The lye reacts with any fats creating soap which may be enough to break up the clog. Also, the finely-divided aluminum reacts with water creating tremendous heat so that that mixture boils and churns, then any hair or fibers are cut by the sharp edges of the nitrate and chloride crystals. Having said all that, I find that boiling water poured down the drain almost always does the job …

6. Scads of centuries EON
Geological time is divided into a number of units of varying lengths. These are, starting from the largest:

7. Prez on a penny ABE
The US one-cent coin has borne the profile of President Abraham Lincoln since 1909, the centennial of Lincoln’s birth. Fifty years later, a representation of the Lincoln Memorial was added to the reverse side.

8. Painter Rockwell NORMAN
Norman Rockwell is one of America’s most famous painters and illustrators. A native of New York City, Rockwell is perhaps best known for the cover art that he provided for “The Saturday Evening Post” for more than fifty years.

18. Links warning FORE!
No one seems to know for sure where the golfing term “fore!” comes from. It has been used at least as far back as 1881, and since then has been called out to warn other golfers that a wayward ball might be heading their way. My favorite possibility for its origin is that it is a contraction of the Gaelic warning cry “Faugh a Ballagh!” (clear the way!) which is still called out in the sport of road bowling. Road bowling is an Irish game where players bowl balls along roads between villages, trying to reach the end of the course in as few bowls as possible, just like in golf!

22. Vodka order, familiarly STOLI
Stolichnaya is a brand of Russian vodka made from wheat and rye grain. Well, “Stoli” originated in Russia but now it’s made in Latvia, which is of course a completely different country, so you won’t see the word “Russian” on the label.

26. Memorial column, for short OBIT
“Obituary” comes from the Latin “obituaris”, originally the record of the death of a person, although the literal meaning is “pertaining to death”.

27. Pita filling FALAFEL
Falafel is a fried ball of ground chickpeas or fava beans served in pita bread. I love chickpeas, but falafel just seems too dry to me.

35. “Trainwreck” actress/screenwriter Schumer AMY
Amy Schumer is a stand-up comedian, and an alumna of the reality TV show “Last Comic Standing”, in which she placed fourth. Schumer now has her own comedy series “Inside Amy Schumer”, which airs on Comedy Central. Amy is a first cousin once removed of Chuck Schumer, the senior US Senator from New York.

40. Entourages RETINUES
A “retinue” is a body of aides who attend an important person. The term comes from the Old French “retenue” that had the same meaning, although the literal translation is “that which is retained”. The idea is that the aides are retained to attend the VIP.

An “entourage” is a group of attendants or followers. The term comes into English from French, in which language “entourer” means “to surround”.

45. Spiral pasta ROTINI
Rotini is the corkscrew-shaped pasta that is often used in pasta salads. Even though “rotini” sounds like it comes from a word meaning “twist, rotate”, the word “rotini” doesn’t exist in Italian, other than as the name for the pasta.

47. Japanese floor mat TATAMI
A tatami is a traditional mat used on floors in Japan. The term “tatami” comes from the Japanese word “tatamu” meaning “to fold”, reflecting the fact that the mat is designed to be folded up for storage.

48. Laurel of Laurel and Hardy STAN
Stan Laurel was an English comic actor (born Arthur Stanley Jefferson), who made a great career for himself in Hollywood. Laurel ended up at the Hal Roach studio directing films, intent on pursuing a career in writing and directing. However, he was a sometime actor and was asked to step in when another comic actor, Oliver Hardy, was injured and couldn’t perform. Laurel and Hardy started to share a stage together during that time and when it was clear they worked so well together, their partnership was born. Oh, and the oft-quoted story that Clint Eastwood is the son of Stan Laurel … that’s just an urban myth.

51. Like three Cy Young games NO-HIT
Cy Young was a pitcher in the major leagues from 1890-1911. Young is remembered for pitching the first perfect game of baseball’s modern era. Soon after he died in 1955, the Cy Young Award was created and is presented to the best pitcher in each baseball season.

57. “The Cosby Show” son THEO
Malcolm-Jamal Warner was the child actor who played Theo Huxtable on “The Cosby Show”. You can see the grown-up Warner today, playing Dr. Alex Reed on the BET sitcom “Reed Between the Lines”.

59. Baltic or Aegean SEA
The Baltic is a sea in northern Europe that is much less saline than the oceans. The lower amount of salt in the Baltic partially explains why almost half of the sea freezes over during the winter. In fact, the Baltic has been known to completely freeze over several times over the past few centuries.

61. Sara whom “nobody doesn’t like” LEE
In 1935, businessman Charles Lubin bought a chain of three bakeries in Chicago called Community Bake Shops, and soon expanded the operation into seven stores. Lubin introduced a cream cheesecake that he named after his daughter who was only 8-years-old at the time, Sara Lee Lubin. The cheesecake was a hit and he renamed the bakeries to Kitchen of Sara Lee. The business was bought out by Consolidated foods in 1956, but the brand name Sara Lee persists to this day, as does Ms. Sara Lee herself who now goes by the name Sara Lee Schupf.