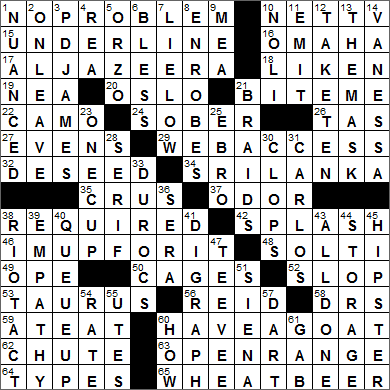 Today’s Wiki-est, Amazonian Googlies
Across
10. Ustream offering NET TV
Ustream is a San Francisco-based video streaming company. The Ustream service enables one person to broadcast to many. The idea was developed by two US Army officers who wanted a way for soldiers serving overseas to communicate with many friends and family back home all at once, rather than having to make multiple Internet calls.

16. Missouri River city OMAHA
Omaha is the largest city in the state of Nebraska. It is located on the Missouri River, about 10 miles north of the mouth of the Platte River When Nebraska was still a territory Omaha was its capital, but when Nebraska achieved statehood the capital was moved to the city of Lincoln.

17. Qatar-based broadcaster AL JAZEERA
Al Jazeera is an independent news service owned by the state of Qatar. Since 2006, Al Jazeera has been broadcasting an English language channel, hiring many top journalists from American news outlets. “Al jazeera” is Arabic for “the island”.

19. Org. concerned with pedagogy NEA
Strictly speaking, “pedagogue” is a schoolteacher. The term has developed a secondary meaning, to describe someone who is pedantic and overly formal. Back in Ancient Greece, a “paidagogos” was a slave who escorted boys to school and supervised them at school.

20. Parliament : London :: Storting : __ OSLO
The Storting is the Norwegian parliament and is located in Oslo, Norway’s capital city. The Storting differs in structure from say the US Congress and the British Parliament in that is “unicameral”, it has only one legislative chamber.

21. “As if I care!” BITE ME!
“Bite me!” is one of those idiomatic expressions that I find quite distasteful. This one does indeed have raunchy and obscene origins and might be described as a “minced oath”. It developed as a less offensive form of a more pornographic insult.

22. Blending aid, briefly CAMO
Our term “camouflage” evolved directly from a Parisian slang term “camoufler” meaning “to disguise”. The term was first used in WWI, although the British navy at that time preferred the expression “dazzle-painting” as it applied to the pattern applied to the hulls of ships.

A “proctor” is a supervisor, especially of an examination in a school, or perhaps of a dormitory. The word “proctor” originated in the late 1500s, a contraction of the word “procurator”, the name given to an official agent of a church.

29. Amazon visitor’s need WEB ACCESS
Amazon.com is the largest online retailer in the world. The company was founded in 1994 by Jeff Bezos, in his garage in Bellevue, Washington. I’m a big fan of Amazon’s approach to customer service …

34. Noted source of rubies and sapphires SRI LANKA
The name Sri Lanka translates from Sanskrit into English as “venerable island”. Before 1970, Sri Lanka was known as Ceylon, a name given to the country during British rule.

35. French vineyards CRUS
“Cru” is a term used in the French wine industry that means “growth place”. So, “cru” is the name of the location where the grapes are grown, as opposed to the name of a specific vineyard. The terms “premier cru” and “grand cru” are also used, but the usage depends on the specific wine region. Generally it is a classification awarded to specific vineyards denoting their potential for producing great wines. “Grand cru” is reserved for the very best vineyards, with “premier cru” the level just below.

48. Knighted conductor SOLTI
Sir Georg Solti was a great Hungarian-British conductor, who spent 22 years as music director of the Chicago Symphony, one of many prestigious positions he held in the world of classical music and opera. Solti was awarded 31 Grammy Awards, the most won by any individual in any genre of music.

49. “‘I __ you liked your drink,’ sez Gunga Din” ‘OPE
“Gunga Din” is an 1892 poem penned by Rudyard Kipling. The poem tells of a British soldier in colonial India and a native water-bearer who saves his life. We tend to pronounce the water bearer’s name as Gunga Din, with the “din” just as it’s written, like the loud noise. Based on the rhymes in the poem however, we should be pronouncing it “deen”.

53. Ford model TAURUS
The Taurus is an incredibly successful car that was introduced by Ford in 1985. The Taurus was the successor to the Ford LTD, and is still in production today. The Taurus was the best-selling automobile in the US between 1992 and 1996, before being knocked off its pedestal by Japanese imports.

62. It’s open at the end of the fall CHUTE
The term “parachute” was coined by Frenchman François Blanchard, from “para-” meaning “defence against” and “chute” meaning “a fall”.

Down
3. “Death Comes to Pemberley” author PD JAMES
P. D. James was an incredibly successful English author of crime fiction, with her most famous books being a series that features a policeman and sometime poet, Adam Dalgliesh. James’ 1992 novel called “The Children of Men” was adapted into a 2006 movie (“Children of Men”) starring Clive Owen and Julianne Moore. It tells of a world that develops after two generations of human infertility.

“Death Comes to Pemberley” is an inventive murder mystery penned by P.D. James that is a continuation of Jane Austen’s masterpiece “Pride and Prejudice”. The P.D. James novel was adapted into an entertaining BBC miniseries that first aired in 2013. I’ve read a few “Pride and Prejudice” spinoffs, and this one is among the best of the genre.

4. “In Dreams” actor REA
Stephen Rea is an Irish actor from Belfast. Rea’s most successful role was Fergus in 1992’s “The Crying Game”, for which performance he was nominated for the Best Actor Oscar. In “The Crying Game”, Fergus was a member of the IRA. In real life, Rea was married to IRA bomber and hunger striker Dolours Price at the time he made the movie.

“In Dreams” is a 1999 thriller film directed by the great Neil Jordan. The movie features Annette Bening as a suburban housewife who develops a psychic connection with a serial killer who murdered her own daughter. I haven’t seen this one …

5. Ingredient in some Italian wedding soup ORZO
Orzo is pasta that has been formed into granular shapes, much like barley. And indeed, “orzo” is the Italian word for “barley”.

Wedding soup consists of meat and green vegetables in a broth, and is found on the menus of many Italian restaurants in the US. The name “wedding soup” is misnomer, a mistranslation of the “minestra maritata”. The Italian name translates as “married soup”, a reference to the pairing of meat and vegetables.

9. Word of apology MEA
Many Roman Catholics are very familiar with the Latin phrase “mea culpa” meaning “my fault”, as it is used in the Latin Mass. The additional term “mea maxima culpa” translates as “my most grievous fault”.

10. __ me tangere NOLI
“Noli me tangere” is Latin for “touch me not”. The words are the Latin translation of “cease holding on to me” written in Greek in the Gospel of John. They are words spoken by Jesus to Mary Magdalene after his resurrection.

13. 1994 Jim Carrey film THE MASK
“The Mask” is a 1994 film that is based on a comic book character. Jim Carrey plays the title role. Cameron Diaz also appears in the cast, making her film debut.

14. Samuel Barber opera VANESSA
“Vanessa” is an opera by Samuel Barber that was first performed in 1958, in New York. Vanessa is a woman who is to be united with her lover after a gap of twenty years, but the man who turns up at the initial reunion is actually the son of the former lover. Complications ensue …

25. River from Cantabria to Catalonia EBRO
The Ebro is the longest river in Spain. The river was known by the Romans as the Iber, and it is the “Iber” river that gives the “Iberian” Peninsula its name.

28. Finishing stroke SERIF
Serifs are details on the ends of characters in some typefaces. Typefaces without serifs are known as sans-serif (using the French word “sans” meaning “without”). Some people say that serif fonts are easier to read on paper, whereas sans-serif fonts work better on a computer screen. I’m not so sure though …

31. Mexican novelist Fuentes CARLOS
Carlos Fuentes was a novelist and essayist from Mexico. His most famous works are “The Death of Artemio Cruz”, “Aura”, “Terra Nostra”, “The Old Gringo” and “Christopher Unborn”. Although considered for the Nobel Prize for Literature, Fuentes never won.

33. Large pigs DUROCS
A Duroc is a breed of domestic pig, red in color and with a large frame, and a tendency to be quite aggressive. The breed originated in New England and supposedly takes its name from a thoroughbred stallion that was famous around 1800.

36. Shot contents SERA
Blood serum is the clear, yellowish part of blood i.e. that part which is neither a blood cell or a clotting factor. Included in blood serum are antibodies, the proteins that are central to our immune system. Blood serum from animals that have immunity to some disease can be transferred to another individual, hence providing that second individual with some level of immunity. Blood serum used to pass on immunity can be called “antiserum”.

38. Babysitter’s reading, at times RIOT ACT
The Riot Act was a British law that was in force from 1715 to 1967. According to the Riot Act, government entities could declare any gathering of twelve or more people “unlawful”. Our expression “read the Riot Act” is derived from the requirement for the authorities to read out the Riot Act proclamation to an unlawful assembly before the Act could be enforced.

41. The “rh” in “rhapsody,” e.g. DIGRAPH
A digraph is a pair of letters that are used to represent one distinct sound, such as “sh” or “th” in English.

44. Cloud function STORAGE
In the world of computing, when one operates “in the cloud”, one’s files and key applications are not stored on one’s own computer, but rather are residing “in the cloud”, on a computer somewhere out on the Internet. I do 90% of my computing in the cloud. That way I don’t have to worry about backing up files, and I can operate from any computer if I have to …

55. Salt Lake City team UTES
The Utah Utes are the college football team of the University of Utah.

60. wiki__: collection of online manuals HOW
wikiHow is a website that has the stated mission of building the world’s largest how-to manual. The site was launched in 2005 by the owners of the website eHow.