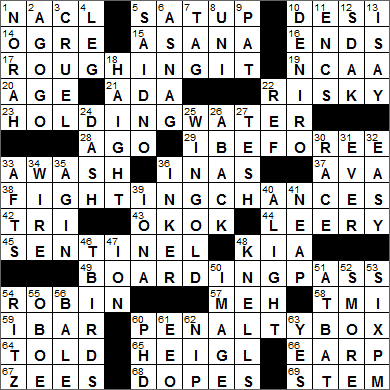 CROSSWORD SETTER: Howard Barkin
THEME: Penalty Box … each of today’s themed answers starts with a reason a hockey play might end up in the PENALTY BOX:

60A. Hockey punishment for the starts of the longest across answers PENALTY BOX

Today’s Wiki-est, Amazonian Googlies
Across
1. Great Salt Lake component, to a chemist NACL
Sodium chloride (NaCl, common salt) is an ionic compound, a crystal lattice made up of large chloride (Cl) ions in a cubic structure, with smaller sodium (Na) ions in between the chlorides.

10. Lucy’s partner DESI
Desi Arnaz was famous for his turbulent marriage to Lucille Ball. Arnaz was a native of Cuba, and was from a privileged family. His father was Mayor of Santiago and served in the Cuban House of Representatives. However, the family had to flee to Miami after the 1933 revolt led by Batista.

15. Yoga position ASANA
“Asana” is a Sanskrit word literally meaning “sitting down”. The asanas are the poses that a practitioner of yoga assumes. The most famous is the lotus position, the cross-legged pose called “padmasana”.

The BIG EAST collegiate athletic conference was founded in 1979. The conference went through a major realignment between 2010 and 2013 with 14 schools departing, and 15 schools then joining the lineup.

The Big South collegiate athletic conference was founded in 1983. Notably absent from the sports sponsored by the Big South was football, until 2002.

29. Start of a spelling rule broken by deists? I BEFORE E
The oft-quoted rule “I before E, except after C” is broken in the spelling of “weird”.

37. Co-star of Burt in “The Killers” AVA
Ava Gardner is noted for her association with some big movies, but also for her association with some big names when it came to the men in her life. In the world of film, she appeared in the likes of “Mogambo” (1953), “On the Beach” (1959), “The Night of the Iguana” (1964) and “Earthquake” (1974). The men in her life included husbands Mickey Rooney, Artie Shaw and Frank Sinatra. After her marriages had failed (and perhaps before!) she had long term relationships with Howard Hughes and bullfighter Luis Miguel Dominguin whom she met through her friend Ernest Hemingway.

Burt Lancaster was a Hollywood movie star from New York City. Lancaster started out his performance career working as an acrobat with the Kay Brothers circus, but had to retire from the Big Top due to injury. After serving as an entertainer with the US Army during WWII, he took up acting in New York, where he was discovered by a Hollywood agent and started his film career. Lancaster was often cast as a good-looking tough guy, but I personally preferred the movies in which he played the more off-beat roles, e.g. “Separate Tables” (1958), “Judgement at Nuremberg” (1961), “Birdman of Alcatraz” (1962) and “Local Hero” (1983).

48. Korean automaker KIA
Kia Motors is the second largest manufacturer of cars in South Korea, behind Hyundai (and Hyundai is a part owner in Kia now). In recent years, Kia has focused on sales into Europe, and has been remarkably successful.

54. Adolescent sidekick ROBIN
Batman and Robin are unique among their superhero compatriots in that they have no special powers, just a whole load of cool gadgets. Batman is sometimes referred to as the Caped Crusader, Robin as the Boy Wonder, and the pair as the Dynamic Duo.

57. Indifferent response MEH
“Meh!” is one of those terms unfamiliar to me outside of crosswords. It is a modern colloquialism meaning “I’m not great, but not bad”. A friendly reader of this blog tells me that the usage of the term increased dramatically after it started to appear regularly in “The Simpsons” starting in the early nineties.

58. “I did not need to know that” TMI
Too Much Information (TMI)

66. Clanton foe EARP
Wyatt Earp is famous as one of the participants in the gunfight at the O.K. Corral. Earp was a city policeman in Wichita, Kansas and also in Dodge City, Kansas. Earp was also deputy sheriff in Tombstone, Arizona where the O.K. Corral gunfight took place. Years later, Earp joined the Alaska Gold Rush and with a partner built and operated the Dexter Saloon in Nome.

Ike and Billy Clanton participated in what has to be the most famous gunfight in the history of the Old West, the Gunfight at the O.K. Corral that took place in Tombstone, Arizona. Strangely enough, the fight didn’t happen at the O.K. Corral, but took place six doors down the street in a vacant lot next to a photography studio.

68. Schmoes DOPES
“Schmo” (also “shmo”) is American slang for a dull or boring person, from the Yiddish word “shmok”.

Down
1. Ravi’s musical daughter NORAH
The beguiling Norah Jones is the daughter of famous sitar virtuoso Ravi Shankar, and is one of my favorite singers. If you haven’t heard Jones sing her song “Come Away with Me”, you just haven’t lived …

2. Disco era suffix … A GOGO
Discotheques first appeared during WWII in Occupied France. American-style music (like jazz and jitterbug dances) was banned by the Nazis, so French natives met in underground clubs that they called discotheques where records were often played on just a single turntable. After the war, these clubs came out into the open. One famous Paris discotheque was called “Whiskey a Gogo”. In that Paris disco, non-stop music was played using two turntables next to a dance-floor, and this concept spread around the world.

10. “Meet the Parents” actor DE NIRO
Robert De Niro is noted for his longtime and highly successful collaboration with the director Martin Scorsese. He is also noted for his commitment as a method actor. Famously he gained a full 60 pounds in order to play Jake Lamotta in the 1980 movie “Raging Bull”.

11. Contents of some envs. ENCS
An envelope (env.) might contain an enclosure (enc.).

12. Neb. neighbor SDAK
The Dakotas were admitted into the union in 1889, along with Montana and Washington. There was a famous rivalry between North and South Dakota, and some jockeying to determine which of the two’s admission papers should be signed first. President Harrison solved the problem by directing that the papers of all four states should be shuffled, and he signed them without recording the order.

18. __-Ashbury: San Francisco section HAIGHT
Haight-Ashbury is a neighborhood in San Francisco that is centered on the intersection of Haight Street and Ashbury Street. The district was one of the epicenters of hippie life in the sixties, and was home to psychedelic rock performers of the day including Jefferson Airplane, the Grateful Dead and Janis Joplin.

24. Smidgen of spice DASH
In cooking, a “dash” is a very small measure, one that is often undefined. However, you can in fact buy some measuring spoons that define not only a dash but also a “pinch” and a “smidgen”, as follows:

25. Take the top medal WIN GOLD
In the Ancient Olympic Games, the winner of an event was awarded an olive wreath. When the games were revived in 1896, the winners were originally given a silver medal and an olive branch, with runners-up receiving a bronze medal and a laurel branch. The tradition of giving gold, silver and bronze medals began at the 1904 Summer Olympic Games held in St. Louis, Missouri.

27. New Age musician John TESH
John Tesh is a pianist and composer, as well as a radio and television presenter. For many years Tesh presented the show “Entertainment Tonight”. For “ET” he once covered the filming of an episode of “Star Trek: The Next Generation”. As part of the piece, he volunteered to act as a Klingon warrior and so if you see the “Star Trek: TNG” episode called “The Icarus Factor” in reruns, watch out for John Tesh engaging in ritual torture with Mr. Worf as his victim.

30. Compete in a heat RACE
The term “heat”, meaning a qualifying race, dates back to the 1660s. Originally a heat was a run given to a horse to prepare it for a race, to “heat” it up.

39. Isle of Mull neighbor IONA
Although the small island of Iona lies just off the west coast of Scotland, it was the site of a monastery built in the Middle Ages by a monk from Ireland names Colm Cille (also known as Columba). Colm Cille and his followers were sent into exile from the Irish mainland and settled in Iona, as at that time the island was part of an Irish kingdom. This monastery in Iona expanded its influence over the decades and founded other institutions all over Ireland and Great Britain. It is believed that the famous Book of Kells may have been written, or at least started, at the monastery on Iona. Iona is also the burial site for Macbeth, King of Scotland who was immortalized in Shakespeare’s fictional account of the king’s life.

The Isle of Mull (sometimes called just “Mull”) is part of the Inner Hebrides, which lie off the west coast of Scotland.

46. Classic Fords T-BIRDS
Ford manufactured the Thunderbird (T-Bird) from 1955 to 2005, originally as a two-seater sporty convertible. The T-Bird was introduced as a competitor to Chevrolet’s new sports car, the Corvette.

47. Accelerator particle ION
In a particle accelerator, the particles that are accelerated have to have a charge, and so are ions. The charged ions are subjected to high magnetic fields that propel them around a circular “racetrack”, before being smashed into something, just to see what happens!

48. Mournful tolls KNELLS
The word “knell” is used for a solemn ring from a bell, often associated with death or a funeral. “Knell” comes the Old English “cnell” and is probably imitative in origin, sounding like a peal from a large bell.

52. Three-ingredient treat S’MORE
S’mores are treats peculiar to North America, usually eaten around a campfire. A s’more consists of a roasted marshmallow and a layer of chocolate sandwiched between two graham crackers. The earliest written reference to the recipe is in a 1927 publication called “Tramping and Trailing with the Girl Scouts”. Girl Scouts always did corner the market on cookies and the like!

53. Common dinner hr. SIX PM
The 12-hour clock has been around a long time, and was even used in sundial format in Ancient Egypt. Our use of AM and PM dates back to Roman times, with AM standing for Ante Meridiem (before noon) and PM standing for Post Meridiem (after noon). However, the Romans originally used the AM concept a little differently, by counting backwards from noon. So, 2AM to the Romans would be two hours before noon, or 10AM as we would call it today.

54. Nabisco cracker RITZ
I’ve always liked Ritz crackers. They’ve been around since 1934 when they were introduced by Nabisco. The name Ritz was chosen because the marketing folks felt that the association with Ritz-Carlton would evoke images of wealth and the highlife.

56. About 500 pounds of cotton BALE
Cotton is usually measured in bales. Here in the US, a bale is 17 cubic feet in size, with a weight of 500 pounds.

60. Scholar’s deg. PHD
PhD is an abbreviation for “philosophiae doctor”, Latin for “teacher of philosophy”.

61. Want-ad abbr. EEO
Equal Employment Opportunity (EEO) is a term that has been around since 1964 when the Equal Employment Commission was set up by the Civil Rights Act.