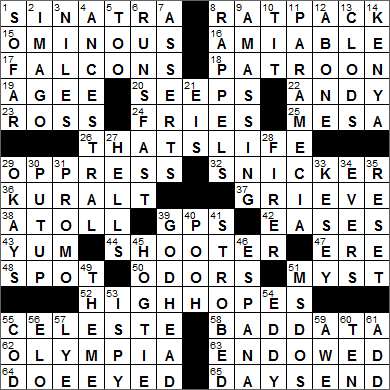 Today’s Wiki-est, Amazonian Googlies
Across
1. 8-Across member born 12/12/1915 SINATRA
Frank Sinatra was the only child of Italian immigrants living in Hoboken, New Jersey. Like so many of our heroes, Sinatra had a rough upbringing. His mother was arrested several times and convicted of running an illegal abortion business in the family home. Sinatra never finished high school, as he was expelled for rowdy conduct. He was later arrested as a youth on a morals charge for carrying on with a married woman, which was an offence back then. But Sinatra straightened himself out by the time he was twenty and started singing professionally.

8. Group formed in the ’50s RAT PACK
The original Rat Pack from the fifties was a group of actors that centered on Humphrey Bogart, and included a young Frank Sinatra. Supposedly, Bogart’s wife, Lauren Bacall, christened them the Rat Pack after seeing them all return from one of their nights on the town in Las Vegas. The sixties Rat Pack was a reincarnation of the fifties version, with the core group of actors being Frank Sinatra, Dean Martin (Dino), Sammy Davis Jr., Joey Bishop and Peter Lawford.

17. Super Bowl XXXIII team FALCONS
The Atlanta Falcons joined the NFL in 1965. The team name was suggest by a school teacher called Miss Julia Elliott. Elliot suggested that “the Falcon is proud and dignified, with great courage and fight. It never drops its prey. It is deadly and has a great sporting tradition.”

Super Bowl XXXIII was played after the 1998 season between the Denver Broncos and the Atlanta Falcons. The Broncos emerged victorious with a score of 34-19. Denver’s quarterback John Elway was named MVP, and at 38 years old was the oldest player ever named Super Bowl MVP. Also, Super Bowl XXXIII was the final game of Elway’s career.

18. New Amsterdam landowner PATROON
In the 17th-century Dutch colony of New Netherland on the East Coast of New America, “patroon” was a title given to someone who owned substantial tracts of land. “Patroon” is the Dutch word for “patron”.

19. 1958 Pulitzer-winning author AGEE
James Agee was a noted American film critic and screenwriter. Agee wrote an autobiographical novel “A Death in the Family” that won him his Pulitzer in 1958, albeit posthumously. He was also one of the screenwriters for the 1951 classic movie “The African Queen”.

22. Youngest of the musical Gibb brothers ANDY
Andy was the younger brother of the brothers Gibb that made up the British band the Bee Gees. Andy pursued a successful solo career, but got himself into trouble with drug use. He died in 1988, just after his 30th birthday.

23. Antarctica’s __ Sea ROSS
The Ross Sea is a bay in the Southern Ocean of Antarctica. It was discovered by one James Ross in 1841. A more recent discovery, in the waters of the Ross Sea, was a 33 feet long giant squid that was captured in 2007.

25. Road Runner cartoon background element MESA
“Mesa” is the Spanish for “table” and is of course is how we get the term “mesa” that describes the geographic feature. A mesa is similar to a butte. Both are hills with flat tops, but a mesa has a top that is wider than it is tall. A butte is a much narrower formation, taller than it is wide.

26. 1-Across hit THAT’S LIFE
“That’s Life” is a song recorded by Frank Sinatra in 1966, and the title of the album on which it was included. Written by Dean Kay and Kelly Gordon, the song was first recorded by Marion Montgomery in 1966.

36. Longtime CBS journalist Charles KURALT
Charles Kuralt was a television journalist who gained real fame appearing in a regular segment called “On the Road” aired on “The CBS Evening News with Walter Cronkite”. “On the Road” certainly wasn’t a hard news piece, but rather Kuralt reporting about who and what he encountered traveling “on the road” all over America. He traveled with a small crew in a motorhome, mainly sticking to the country’s back roads. By the time the segment came off the air Kuralt had worn out six motorhomes in all.

38. Part of the Maldives ATOLL
An atoll is a coral island that is shaped in a ring and enclosing a lagoon. There is still some debate as to how an atoll forms, but a theory proposed by Charles Darwin while on his famous voyage aboard HMS Beagle still holds sway. Basically an atoll was once a volcanic island that had subsided and fallen into the sea. The coastline of the island is home to coral growth which persists even as the island continues to subside internal to the circling coral reef.

The Maldives is an island nation consisting of two chains of atolls in the Indian Ocean. The population of over 300,000 people is distributed over 192 of inhabited islands, with about 1,000 island remaining uninhabited. The Maldives is one of the countries in the world that is most endangered by rising sea levels.

“TripTik” is the brand name for customized travel maps provided by AAA for its members.

42. Ameliorates EASES
“To ameliorate” is to make better, and comes to us from French. The French for “better” is “meìlleur”.

O tender spouse of gold Hyperion,
Thea, I feel thee ere I see thy face;
Look up, and let me see our doom in it;
Look up, and tell me if this feeble shape
Is Saturn’s; tell me, if thou hear’st the voice
Of Saturn; tell me, if this wrinkling brow,
Naked and bare of its great diadem,
Peers like the front of Saturn.

51. Game in which the player is called the Stranger MYST
In the days when I played the occasional video game, the best of the bunch was undoubtedly “Myst”. It is a game full of puzzles with the player wandering through a beautifully-designed (for its day) interactive world.

52. 1-Across hit HIGH HOPES
Sammy Cahn wrote the lyrics for “High Hopes” for the 1959 film “A Hole in the Head”, and the song won an Oscar that year. Frank Sinatra was the star of the movie, and he recorded the most famous version of the song.

62. Rainy U.S. capital OLYMPIA
Olympia is the capital of Washington State and is located in the Puget Sound region. The city’s name was chosen in 1852, a reference to the view of the Olympic Mountains to the northwest.

Down
2. Insect stage IMAGO
The imago is an intermediate stage in the development of an insect. All four stages are embryo, larva, pupa and imago.

3. Longtime radio/TV announcer Wendell __ NILES
Wendell Niles was a radio announcer in the so called golden age of radio. Niles’ voice was heard in shows like “The Adventures of Philip Marlowe”, “The Burns & Allen Show”, “The Milton Berle Show” and “The Bob Hope Show”. Niles also accompanied Bob Hope on USO tours during WWII.

8. Alpine rescue maneuvers RAPPELS
What we call “rappelling” in this country is known as “abseiling” in the rest of the world (from the German “abseilen” meaning “to rope down”).

11. Slide subjects PARAMECIA
A “paramecium” is a single-celled organism that moves around in water using the tightly-spaced cilia that surrounds its body.

30. Something to do with dukes? PUT UP
“Dukes” is a slang term for “fists, hands”. The route taken by “dukes” to become fists seems very tortuous, but might just be true. The term “fork” has been slang for “hand” for centuries (and gives rise to “fork out” meaning “hand over”). The slang term “fork” is expressed in Cockney rhyming slang as “Duke of York”, shortened to “duke”. As I said, tortuous …

33. Nurse Ratched creator KESEY
Nurse Ratched was the control-freak of a nurse who ran the ward in the Ken Kesey novel “One Flew Over the Cuckoo’s Nest”. In the 1975 movie of the same name, Ratched was played by actress Louise Fletcher. Fletcher won an Oscar for that performance.

34. Activist Medgar EVERS
Medgar Evers was an African American civil rights activist from Mississippi who was assassinated by the Klu Klux Klan in 1963. A year after the murder, one Byron De La Beckwith was arrested and charged with the crime. Two trials failed to return a decision on Beckwith’s guilt as the juries, composed completely of white males, deadlocked both times. New evidence was unearthed some thirty years later so Beckwith could be retried and he was finally convicted of the murder in 1994. Back in 1963 Evers was buried with full military honors in Arlington National Cemetery. Evers had served in the US Army in France during WWII and left the military with the rank of sergeant.

39. Divinity GODHEAD
The term “Godhead” is used in many traditions, with varying meanings. In the most general sense, the term refers to the essential nature of a god or divinity. The word comes from an Old English word “godhad” meaning “godhood”, the state of being a god. In Christianity, Godhead can refer to the Trinity, the Father, Son and Holy Spirit.

40. “Oh, bother” speaker POOH
A. A. Milne’s “Winnie-the-Pooh” has been translated into many languages, and is one of the few modern titles for which there is a Latin version. Alexander Lenard had “Winnie ille Pu” published in 1958, and two years later it made it to the New York Times Best Seller List, the only book in the Latin language ever to get that honor.

41. Pulsed, as light show effects STROBED
A strobe light is a device that produces regular flashes, like the light on top of a police car. The term derives from the Greek “strobos” meaning “twisting, whirling”.

45. Restrict HOGTIE
The “hogtie” was first used on pigs (hence the name), and involves the tying together of all four limbs in order to render the animal immobile. On a pig, or any other four legged animal, the limbs are obviously tied in front. To hogtie a human the hands are usually tied behind the back and joined to a rope binding the ankles.

46. Miró’s birthplace, to Miró ESPANA
Joan Miró was a Spanish artist. Miro immersed himself in Surrealism, so much so that Andre Breton, the founder of the movement, said that Miro was “the most Surrealist of us all”.

The country’s name of “Spain” is “España” in Spanish.

49. Motif THEME
A motif is a recurring element in an artistic work or design.

51. Early PC system MS-DOS
MS-DOS (short for Microsoft Disk Operating System) was the main operating system used by IBM-compatible PCs in the eighties and for much of the nineties.

55. Marine oil source COD
Cod liver oil is a nutritional supplement that is rich in omega-3 fatty acids, as well as vitamins A and D. I remember being dosed with the stuff as a kid. Ugh …

57. Pipe cleaner LYE
What we call “lye” is usually sodium hydroxide, although historically the term was used for potassium hydroxide. Lye has many uses, including to cure several foodstuffs. Lye can make olives less bitter, for example. The chemical is also found in canned mandarin oranges, pretzels and Japanese ramen noodles. More concentrated grades of lye are used to clear drains and clean ovens. Scary …