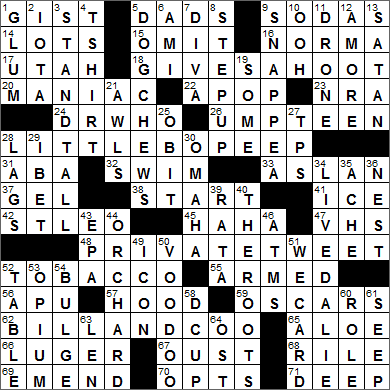 18A. Cares GIVES A HOOT
28A. Girl who lost her sheep LITTLE BO PEEP
48A. Short online message visible only to approved followers PRIVATE TWEET
62A. Get lovey-dovey BILL AND COO

Today’s Wiki-est, Amazonian Googlies
Across
16. __ Jeane Mortenson: Marilyn Monroe’s birth name NORMA
Marilyn Monroe was born in 1926 in LA County Hospital, the child of Gladys Pearl Baker. The young girl was given the name of Norma Jeane Mortenson on her birth certificate, but her mother changed this to Norma Jeane Baker almost immediately. She and her estranged husband, Martin Edward Mortensen, had separated before Baker became pregnant so it is suggested that the Mortensen name was used just to give Norma Jeane “legitimacy”. Norma Jeane married a Jim Dougherty when she 16 years old, and took his name to become Norma Jeane Dougherty in 1932. During WWII she was discovered by a photographer and became quite a successful model. The modelling earned her a screen test, at which time it was suggested that Norma Jeane change her name yet again. The first name chosen for her by studio executives was Carole Lind (after Carole Lombard and Jenny Lind), but then Norma Jeane chose “Jeane Monroe” for herself, using her mother’s maiden name. It didn’t take long before the studio intervened again, suggesting that they had too many “Jeans” already. The name Marilyn Monroe was floated as it had a nice ring to it. Along with the new name, Marilyn changed from a brunette to a blonde, and a star was born …

17. Six-sided state UTAH
The state of Utah does indeed have six sides to it. It’s almost shaped like a rectangle, but there is a “bite” out of that rectangle in the northeast corner of the state.

24. BBC time traveler DR WHO
The iconic science-fiction television show “Doctor Who” was first aired in 1963, and relaunched in 2005 by the BBC. The relaunched series is produced in-house by the BBC in Cardiff in Wales, the location that is the setting of the successful “Doctor Who” spin-off called “Torchwood”. The new show is about the Cardiff branch of the Torchwood Institute which investigates incidents involving extraterrestrials.

28. Girl who lost her sheep LITTLE BO PEEP
The lines that are most commonly quoted for the rhyme about “Little Bo Peep” are:

Little Bo-Peep has lost her sheep,
And can’t tell where to find them;
Leave them alone, And they’ll come home,
Wagging their tails behind them.

But, there are actually four more verses, including this one:

It happened one day, as Bo-peep did stray
Into a meadow hard by,
There she espied their tails side by side,
All hung on a tree to dry.

33. Narnia lion ASLAN
In the C. S. Lewis series of books “The Chronicles of Narnia”, Aslan is the name of the lion character (as in “The Lion, the Witch and the Wardrobe”). “Aslan” is actually the Turkish word for lion. Anyone who has read the books will recognize the the remarkable similarity between the story of Aslan and the story of Christ, including a sacrifice and resurrection.

42. Canonized fifth-cen. pope ST LEO
The first pope named Leo is now known as Pope Saint Leo the Great. Leo I is famous for meeting with the feared Attila the Hun and persuading him to turn back his invading force that was threatening to overrun Western Europe.

47. VCR format VHS
The video standard known as VHS is more fully referred to as the Video Home System. VHS was one of many standards touted by various manufacturers in the seventies. The biggest rival to VHS was Betamax, but we all knew which of the two standards won the final round in that fight.

48. Short online message visible only to approved followers PRIVATE TWEET
I have never tweeted in my life, and have no plans to do so (but one should never say “never”). Twitter is a microblogging service that limits any post sent to just 140 characters. In a sense, it is similar to this blog. Here I send out a post once a day containing information that I think might be useful to folks (thank you for reading!). I don’t think I could send out much of interest using just 140 characters.

52. Important Colonial cash crop TOBACCO
According to the World Health Organization (WHO), tobacco is the single greatest cause of preventable disease in the world.

56. “The Simpsons” Squishee seller APU
The fictional Kwik-E-Mart store is operated by Apu Nahasapeemapetilon on “The Simpsons” TV show. Apu is married to Manjula, and the couple have eight children. The convenience store owner doesn’t seem to be making much use of his Ph.D in computer science that he earned in the US. Apu’s undergraduate degree is from Caltech (the Calcutta Technical Institute), where he graduated top of his class of seven million students …

57. Parka part HOOD
A parka is a hooded, often fur jacket that is worn in cold weather. The original parka was a pullover design, but nowadays it is usually zipped at the front. “Parka” is the Russian name for the garment , absorbed into English in the late 1700s via the Aleut language.

59. Awards for Helen Hunt and Holly Hunter OSCARS
Helen Hunt is a very talented actress who first came to national attention playing opposite Paul Reiser in TV’s hit sitcom “Mad About You”. Hunt then starred in some major films including “As Good as It Gets” (for which she won the Best Actress Oscar), “Twister, “Cast Away”, What Women Want” and more recently “The Sessions”. Offscreen, Hunt was married for a while to Hank Azaria, a favorite actor of mine.

Holly Hunter won her Best Actress Oscar for her performance in the 1993 film “The Piano”. Hunter is quite the pianist herself and played all her piano pieces in the film herself.

62. Get lovey-dovey BILL AND COO
When birds “bill and coo” together they touch beaks and make noises to each other. The term is also used when two lovers talk quietly to each other, and kiss.

66. German pistol LUGER
The correct name for the pistol known as the Luger is the Pistole Parabellum 1908. The Luger’s design was patented by Georg J. Luger in 1898, and became most famous for its use by the Germans during WWII. It was produced from 1900 to 1945, although 200 Lugers were produced recently and sold for over $17,000 each.

69. Revise, as text EMEND
The verb “to amend” means “to change for the better, put right, alter by adding”. The related verb “to emend” is used more rarely and mainly in reference to the editing of professional writing. Both terms are derived from the Latin “emendare” meaning “to remove fault”.

71. __-dish pizza DEEP
Pizza was invented in Naples where it has a long tradition that goes back to Ancient Rome. During an 1889 visit to Naples, Queen Margherita of Savoy was served a special pizza that was created with toppings designed to mimic the colors of the Italian flag. The ingredients of tomato (red), mozzarella (white) and basil (green) can still be found together on menus today on a pie usually named Pizza Margherita after the queen. I do love basil on my pizza …

Down
1. Wearing a long face GLUM
Both “glum” and “gloom” have the same root, coming from the Middle English verb “gloumen” meaning “to become dark”.

2. Greek letter before kappa IOTA
Iota is the ninth letter in the Greek alphabet. We use the word “iota” to portray something very small as it is the smallest of all Greek letters.

Kappa is the 10th letter of the Greek alphabet, the equivalent of our letter K.

9. Salad veggie with an edible pod SNAP PEA
Sugar peas are also known as snap peas. These peas are eaten before the seeds mature, and the whole pod is consumed.

11. Stingless bee DRONE
Drone bees and ants are fertile males of the species, whose sole role in life seems to be to mate with a queen.

12. Valentino’s valentine AMORE
Rudolph Valentino was an Italian actor who emigrated to the US when he was 18 years old. He developed a Hollywood career in silent movies that propelled him to the status of sex symbol in the twenties. Valentino died very young, having being admitted to hospital with appendicitis and gastric ulcers. He underwent surgery and developed peritonitis, and passed away when he was only 31 years old.

13. The devil SATAN
Satan is the bringer of evil and temptation in the Abrahamic religions. The name “Satan” is Hebrew for “adversary”.

25. Memorial news item, briefly OBIT
“Obituary” comes from the Latin “obituaris”, originally the record of the death of a person, although the literal meaning is “pertaining to death”.

27. Adorns with Cottonelle, informally TPS
TP’ing (toilet papering) is a prank involving the covering of some object or location with rolls and rolls of toilet paper. If you live in Texas or Minnesota, that little “prank” is legal, but if you live here in California it is classed as mischief or vandalism.

Cottonelle is a Kimberly-Clark brand of toilet paper.

30. Nebraska city associated with steaks OMAHA
Omaha is the largest city in the state of Nebraska. It is located on the Missouri River, about 10 miles north of the mouth of the Platte River When Nebraska was still a territory Omaha was its capital, but when Nebraska achieved statehood the capital was moved to the city of Lincoln.

40. Jimmy Fallon’s longtime house band THE ROOTS
The Roots are a band from Philadelphia that formed in 1987. The Roots were the house band on “Late Night with Jimmy Fallon” from 2009 to 2014. They moved with Fallon in 2014 to provide the same service on “The Tonight Show Starring Jimmy Fallon”.

Jimmy Fallon was a cast member for a number of years on “Saturday Night Live” before getting his own talk show in 2009, “Late Night with Jimmy Fallon”. Fallon took over “The Tonight Show” from Jay Leno in 2014.

50. Ritualistic kind of doll VOODOO
Voodoo is a religion that originated the French slave colony of Saint-Domingue on the Caribbean island of Hispaniola.

52. Blackjack surface TABLE
The game of “twenty-one” was first referred to in a book by Cervantes, the author famous for writing “Don Quixote”. He called the game “ventiuna” (Spanish for “twenty-one”). Cervantes wrote his story just after the year 1600, so the game has been around at least since then. Twenty-one came to the US but it wasn’t all that popular so bonus payments were introduced to create more interest. One of the more attractive bonuses was a ten-to-one payout to a player who was dealt an ace of spades and a black jack. This bonus led to the game adopting the moniker “Blackjack”.

53. Poppy narcotic OPIUM
The opium poppy is the source of the narcotic alkaloids known as opiates. To produce opiates, the latex sap of the opium poppy is collected and processed. The naturally-occurring drugs of morphine and codeine can both be extracted from the sap. Some synthesis is required to make derivative drugs like heroin and oxycodone.

64. East, in Essen OST
Essen is a large industrial city located on the River Ruhr in western Germany.