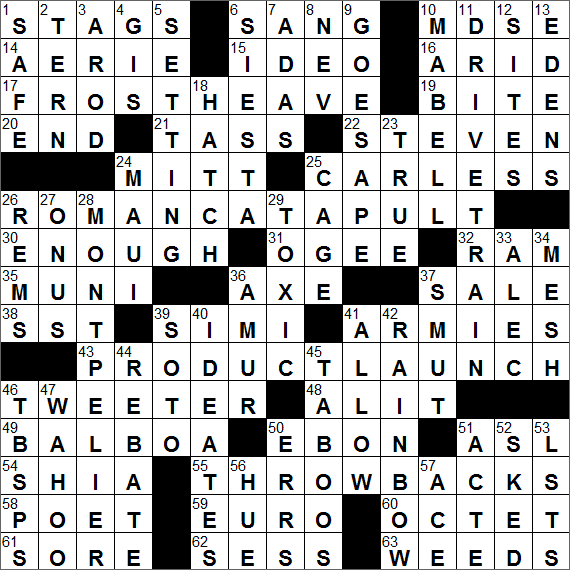 The end (BACK) of each of today’s themed answers is word meaning THROW:

TASS is the abbreviation used for the former news agency that had the full name Telegraph Association of the Soviet Union (Telegrafnoe Agentstvo Sovetskogo Soyuza). When the Soviet Union dissolved in 1992, the Moscow-based agency’s scope changed along with its name. It is now known as the Information Telegraph Agency of Russia (ITAR-TASS).

22…Wright who wondered, “What’s another word for ‘thesaurus’?”..STEVEN

A municipal bond (muni) is one that is issued by a city or local government, or some similar agency. Munis have an advantage over other investments in that any interest earned on the bond is usually exempt from state and federal income taxes.

38…Boomer that no longer booms, briefly..SST

Nowadays Simi Valley, California is perhaps best known as being home to the Ronald Reagan Presidential Library. The library is a great place to visit, and there you can tour one of the retired Air Force One planes.

If ever there was a movie that defines a career breakthrough for an actor, it would have to be “Rocky” for Sylvester Stallone. Stallone was a struggling actor in 1975 when a Muhammad Ali fight inspired Stallone to write a screenplay for a boxing movie, which he did in just three days. His efforts to sell the script went well but for the fact that the interested studios wanted a big name for the lead role, and Stallone was determined to be the star himself. Stallone persevered and “Rocky” was eventually made with him playing title role of Rocky Balboa. The movie won three Oscars, and “Sly” Stallone had arrived …

The Euro is the official currency of most of the member states of the European Union, but not all. The list of states not using the Euro includes the UK, Denmark, Sweden and Norway.

Professional baseball player Alex Rodriguez earned more nicknames than just A-Rod. He has been called “the Cooler” by some players as there is a perception that teams go cold when he joins them and hot when he leaves. He has also been called “A-Fraud” by teammates because of another perception, that he is over-demanding. Rodriguez was in a world of hurt not so long ago, for using illegal performance-enhancing drugs.

The term “Ma Bell” was used to describe the monopoly led by the American Bell Telephone Company and AT&T, that controlled telephone service right across the country. The name “Bell” is after Alexander Graham Bell, the inventor of the first practical telephone.

The drivetrain of a car is made up of the components that deliver power to the driving wheels. The drivetrain excludes the engine, which produces that power. The combination of the engine and the drivetrain is known as the powertrain.

The use of “true blue” to mean loyal and constant has been around since the days of Chaucer, but no one seems to know its etymology.

We’ve been using the skull and crossbones symbol to mark poisons since the 1800s. The image itself dates back to the Late Middle Ages, when it was a symbol of death.

Alec Baldwin is the oldest of the acting Baldwin brothers. I think Alec’s big break was playing Tom Clancy’s Jack Ryan in “The Hunt for Red October”, but thank goodness that role was taken over by Harrison Ford for the subsequent Jack Ryan movies. Baldwin also made a name for himself playing Jack Donaghy on “30 Rock”, opposite Tina Fey.

Hernando de Soto was a Spanish conquistador who led expeditions throughout the southeastern US. De Soto’s travels were unsuccessful in that he failed to bring gold or silver back to Spain, and nor did he found any colonies. What de Soto did achieve was the exposure of local populations to devastating Eurasian diseases. De Soto was the first European to cross the Mississippi River, in 1541. The first European to see the Mississippi (but not cross it) was Alonso Álvarez de Pineda, in 1519.

Iwo Jima is a volcanic island located south of Tokyo that today is uninhabited. The name is Japanese for “Sulfur Island”, referring to the sulfur mining on which Iwo Jima’s economy once depended. There were about a thousand Japanese civilians living on the island prior to WWII. In 1944, there was a massive influx of Japanese military personnel in anticipation of the inevitable US invasion. As the Japanese military moved in, the civilians were forced out and no one has lived there since.

The game of “twenty-one” was first referred to in a book by Cervantes, the author famous for writing “Don Quixote”. He called the game “ventiuna” (Spanish for “twenty-one”). Cervantes wrote his story just after the year 1600, so the game has been around at least since then. Twenty-one came to the US but it wasn’t all that popular so bonus payments were introduced to create more interest. One of the more attractive bonuses was a ten-to-one payout to a player who was dealt an ace of spades and a black jack. This bonus led to the game adopting the moniker “Blackjack”.

6…Ratted out the bad guys..SANG

17…Cold weather groundswell that can cause pavement damage..FROST HEAVE

22…Wright who wondered, “What’s another word for ‘thesaurus’?”..STEVEN

38…Boomer that no longer booms, briefly..SST

61…Kind of spot or loser..SORE