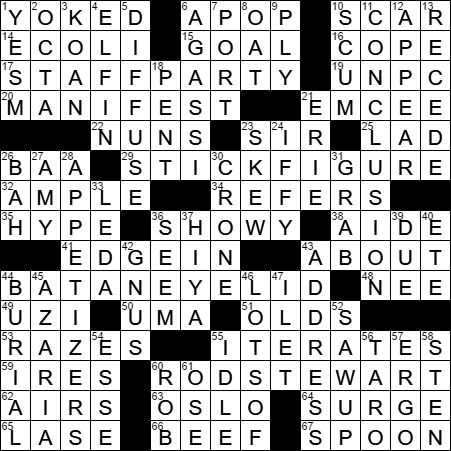 Today’s themed answers all start with words that are synonyms, words that might be replaced with CLUB:

Manifest Destiny was the belief expressed in the 19th century that the United States was “destined” to expand right across North America, from the Atlantic to the Pacific.

Cloisters are usually such beautifully peaceful areas. They are found as part of religious buildings in particular. Cloisters are rectangular open spaces surrounded by covered walkways that are attached to other structures. The use of the term has evolved to also describe a monastery or convent.

Elton John’s real name is Reginald Dwight. Sir Elton was knighted in 1998, not for his music per se, but for his charitable work. He founded his own Elton John AIDS Foundation back in 1992.

The word-guessing game called Hangman seems to have been played first in Victorian England. At one time it was known as “Birds, Beasts and Fishes” as the words to be guessed had to be types of animal.

44. React in the slightest way : BAT AN EYELID

“Gattaca” is a science fiction movie starring Ethan Hawke and Uma Thurman that was released in 1997. Set in the not-too-distant future, the film describes a society in which potential children are preselected so that they inherit the most desirable traits from their parents. The title “Gattaca” is the space agency featured in the storyline. I saw this one relatively recently, and found it very absorbing …

The English singer Rod Stewart first achieved success with the Jeff Beck Group in the late sixties before launching a solo career while recording with a new lineup called Faces. Stewart is an ardent soccer fan, and actually supports the Scottish national team (Rod’s father was Scottish). Stewart plays the game himself, playing for a team called the LA Exiles along with a few other celebrities. He even kicks autographed soccer balls into the audience at his concerts.

“Maggie May” is a wonderful 1971 song recorded and co-written by Rod Stewart. Stewart tells us that the story told in “Maggie May” is basically true, and was inspired by the first woman with whom Stewart had a relationship, at the Beaulieu Jazz Festival in 1961.

A “beef” is a complaint or a grievance. It’s not quite clear how “beef” came to have this meaning, but one suggestion is that derives from the habit of soldiers at the end of the 1800s complaining about the quality or availability of beef in their rations.

The concept of “koan” appears in the Zen Buddhist tradition. A koan is a story, question or perhaps a statement that is used as an aid to meditation. It often takes the form of a problem or riddle that has no logical solution and is intended to help the meditator break free of reason and develop intuition.

Something “elfin” or “fay” is like an elf or a fairy.

Retired tennis professional Andre Agassi has been married to fellow player Steffi Graf since 2001. Agassi wrote an autobiography called “Open”, published in 2009. An amazing revelation in the book is that Agassi’s famous head of hair was actually a wig for much of his playing career. Can you imagine how hard it must have been to play tennis at his level with a rug stuck on?

Amy Schumer is a stand-up comedian, and an alumna of the reality TV show “Last Comic Standing”, in which she placed fourth. Schumer now has her own comedy series “Inside Amy Schumer”, which airs on Comedy Central. Amy is a first cousin once removed of Chuck Schumer, the senior US Senator from New York.

33. Woman seduced by Zeus in the form of a swan : LEDA

A gnu is also known as a wildebeest, an antelope native to Africa. Wildebeest is actually the Dutch word for “wild beast”.

In the “Sherlock Holmes” stories written by Sir Arthur Conan Doyle, the famous detective has lodgings at 221b Baker Street in London. Holmes shares rooms with his friend and chronicler Dr. Watson. The landlady in the residence is the amiable Mrs. Hudson.

Hank Azaria is one of my favorite American actors, someone who I think can really expertly portray a vast array of characters. I can’t stand “The Simpsons” mind you, a show to which Azaria is inextricably linked, but if you look at his role in “The Birdcage” as a flamboyant gay houseboy, and his role in “Shattered Glass” as a stoic magazine editor, you’ll get a taste for Azaria’s extensive range. Azaria was married to actress Helen Hunt, although it was only for 17 months.

The corm of some taro plants is used to make poi, the traditional Hawaiian dish (that I think tastes horrible). When a taro plant is grown as an ornamental, it is often called Elephant Ears due to the shape of its large leaves.

Ergo is the Latin word for “hence, therefore”.

Ribose is a so called “simple sugar”, a monosaccharide. Ribose is the key component in RNA that differentiates it from DNA.

The sugar known as lactose is a disaccharide, comprising a molecule of galactose combined with a molecule of glucose. Lactose is a major component in milk, and it is broken down in the body by an enzyme called lactase. The production of lactase used to diminish over time in humans, as babies stopped nursing and transitioned to solid food. Many human populations have evolved to maintain lactose production throughout life, in response to the inclusion of animal milk in the diet. Individuals and populations that do not have the genes enabling lifelong production of lactase are said to be lactose intolerant.

16. Get through tough times : COPE

44. React in the slightest way : BAT AN EYELID

10. Problem in a neglected pool : SCUM

28. Starters on a menu : APPETIZERS

33. Woman seduced by Zeus in the form of a swan : LEDA