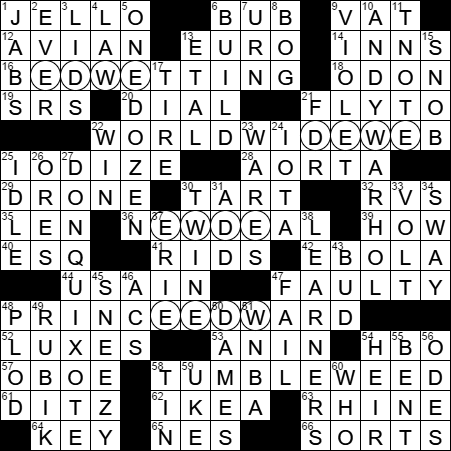 Today’s themed answers each include a series of four circled letters. Those letters are WEED, and have TUMBLED into different orders:

If you like Jell-O, then you want to stop by LeRoy, New York where you can visit the only Jell-O museum in the world. While at the museum, you can walk along the Jell-O Brick Road …

The Greek drachma was in use until it was replaced by the euro in 2002. As well as being Greece’s currency in modern times, the drachma was also used in ancient Greece.

In essence, the World Wide Web is a vast collection of documents that is accessible using the Internet, with each document containing hyperlinks which point to other documents in the collection. So the “Web” is different from the Internet, although the terms are often used interchangeably. The Web is the collection of documents, and the Internet is global network of computers on which the documents reside. The Web was effectively the invention of British computer scientist Tim Berners-Lee. The key to Berner-Lee’s invention was bringing together two technologies that already existed: hypertext and the Internet. I for one am very grateful …

Back in 1924, a professor of pediatrics in Michigan led a campaign in the US to have producers of salt add a small amount of sodium iodide to table salt, so that the population would have a readily available source of the iodine micronutrient. His goal was to reduce the incidence of goiter in the population.

Len Cariou is a Canadian actor, famous for his Broadway portrayal of “Sweeney Todd”. I most recognize him from supporting roles in “Flags of Our Fathers” and “Thirteen Days”, two great movies.

“The Hot Zone” is a 1994 book written by Richard Preston, a non-fiction work describing the history of hemorrhagic fevers (and Ebola in particular).

Prince Edward, Earl of Wessex is British Queen Elizabeth II’s youngest child. When Prince Edward married Sophie Rhys-Jones in 1999, Buckingham Palace announced the intention that the prince will one day inherit his father’s title as Duke of Edinburgh.

The “lux” is the SI unit of illuminance, and is equal to one lumen per square meter.

“The Night Of” is an HBO crime miniseries that is based on a British show called “Criminal Justice”. The intention was that James Gandolfini would play the leading role, but after the actor’s passing in 2013, a replacement had to be found. The role eventually went to John Turturro, but Gandolfini is given a posthumous executive producer credit.

The word “dingbat” has been used to mean a “fool” since the early 1900s. It became very popular after it was used repeatedly by Archie Bunker in the seventies TV show “All in the Family”.

A “key” (also “cay”) is a low island offshore, as in the Florida Keys. Our term in English comes from the Spanish “cayo” meaning “shoal, reef”.

Murphy’s Law can be stated as, “Anything that can go wrong will go wrong”. The concept behind the “law” has been around for eons, but the first association with the name “Murphy” appeared in print in 1952.

The toy known as Lincoln Logs was invented by John Lloyd Wright, the son of architect Frank Lloyd Wright. The toy was named after President Abraham Lincoln, who was born in a log cabin.

Despite being late entering the eco-friendly car market, Chevrolet today produces the most fuel-efficient compact car with a gasoline engine that is sold in the US. The Chevrolet Volt went on sale at the end of 2010, a plug-in hybrid car that runs on batteries. The Volt has a gasoline engine that can be used run an electric generator if needed. The Volt also uses a regenerative braking system similar to that on my Honda Civic Hybrid, a car that I really love.

What was originally called the “Magic Cube” became better known as Rubik’s Cube, named for its inventor Ernő Rubik. Rubik’s Cube is the world’s biggest selling puzzle game, with over 350 million sold in just over 30 years.

47. Apt to malfunction, as wiring : FAULTY

66. Separates for the wash : SORTS

13. And others, in bibliographies : ET AL