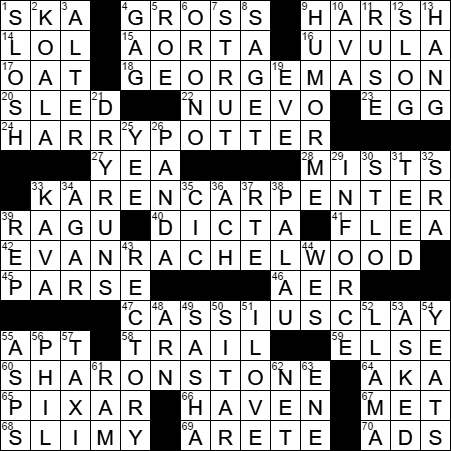 Today’s themed answers are people who can be paired by family name. One family name in the pair is an occupation, and the other is a material used in that occupation:

18. Virginia politician for whom a university is named : GEORGE MASON

In Spanish, the first book in the “Nuevo Testamento” (New Testament) is the Gospel of “Mateo” (Matthew).

Our word “custard” evolved from the Middle French “croustade” meaning “meat or fruit pie (with a “”crust”). Over time the letter R fell away leading to “custard”, possibly due to the influence of the other food item “mustard”.

Karen Carpenter was an accomplished drummer, although she only started playing drums in high school, as a member of the school band. After she graduated she started playing jazz with her brother, Richard, and a college friend. Later, she and Richard played with a group called Spectrum, and submitted many demo tapes to recording companies, but all were unsuccessful. Finally, Karen and Richard got a recording contract with A&M Records, and when they had Karen take the lead on their songs, they hit the big time and toured as the Carpenters. Sadly, Karen passed away at only 32-years-old, dying from heart failure brought on by anorexia.

“(They Long to Be) Close to You” is a Burt Bacharach/Hal David song that was most famously recorded by the Carpenters in 1970. I was surprised to learn that the first recording was by Richard Chamberlain (who played Dr. Kildare on TV).

Actress Evan Rachel Wood’s most famous role to date is playing one of the leads in the 2003 movie “Thirteen”. Wood appears regularly on the small screen, for example playing a sentient android on the HBO series “Westworld”.

64. Letters between names : AKA

65. Where “Ratatouille” was cooked up : PIXAR

An arete is ridge of rock defining the border between two parallel valleys that have been formed by glaciation. If this ridge is rounded, it is called a “col”. However if it is “sharpened”, with rock falling way due to successive freezing and thawing, then it is called an “arete”. “Arête“ is the French word for “fish bone”.

We’ve been using the word “puddle” to mean “small pool of muddy water” since the 15th century. The term ultimately comes from the the German “pudeln” meaning “to splash in water”. “Pudelm” is also the derivation of “poodle”, a breed of dog that was used in hunting waterfowl. So, “poodle” and “puddle” are cousins. Quite interesting …

Ava DuVernay is a filmmaker who became the first African American woman to win the Best Director Prize at the Sundance Film Festival, a feat she achieved in 2012 for her feature film “Middle of Nowhere”. “Middle of Nowhere” tells the story of a woman who drops out of medical school to focus on husband when he is sentenced to 8 years in prison. DuVernay also directed the 2014 film “Selma”, which was centered on the 1965 voting rights marches from Selma to Montgomery, Alabama.

Agar (also “agar-agar”) is a jelly extracted from seaweed that has many uses. Agar is found in Japanese desserts, and can also be used as a food thickener or even as a laxative. In the world of science it is the most common medium used for growing bacteria in Petri dishes.

Palau is a tiny island nation lying 500 miles east of the Philippines, and 2,000 miles south of Japan. Palau was once a Spanish possession and was sold by Spain to Germany in the late 19th century. During WWI, Japan invaded the islands (as Japan had declared war on Germany) and was awarded the islands as a territory by the League of Nations at the end of hostilities. In WWII the US took Palau from the Japanese in a bloody battle in 1944. Palau emerged from American administration in 1994 and is now a sovereign state.

Micronesia is one of the three island regions of Oceania, along with Polynesia and Melanesia. The sovereign nations included in the region are the Federated States of Micronesia, the Marshall Islands, Nauru and Palau. Also in Micronesia are the US territories of Guam, the Northern Mariana Islands and Wake Island.

Film director Wes Anderson’s most famous movie is probably “The Royal Tenenbaums”, released in 2001, not my favorite film by any stretch. However, his 2007 release “The Darjeeling Limited”, that I enjoyed.

In the comic strip, Arn is the eldest son of Prince Valiant and Aleta is his wife. Edward, the Duke of Windsor, called the “Prince Valiant” comic strip the “greatest contribution to English Literature in the past one hundred years”. I’m not so sure …

Sasha Fierce is an alter-ego that Beyoncé Knowles has developed for her stage and recording work. Beyoncé describes Sasha as very sensual and aggressive. She released a studio album called “I Am… Sasha Fierce” in 2008.

The sitar has been around since the Middle Ages. The sitar is a stringed instrument that is played by plucking, and is used most often in Hindustani classical music. In the West we have been exposed to the instrument largely through the performances of Ravi Shankar and some music by George Harrison of the Beatles, a onetime student of Shankar.

Nike was founded in 1964 by entrepreneur Phil Knight and track and field coach Bill Bowerman as Blue Ribbon Sports (BRS). BRS started out by distributing athletic shoes made in Japan. The company started making its own shoes in 1971 and changed its name to Nike, after the Greek goddess of victory.

An alkene is an organic compound made up of carbon and hydrogen atoms. It differs from an alkane in that it has at least one C=C double bond. The simplest alkene is the gas ethylene, a major raw material used in the manufacture of plastics (like polyethylene).

18. Virginia politician for whom a university is named : GEORGE MASON

64. Letters between names : AKA

65. Where “Ratatouille” was cooked up : PIXAR

68. Not at all trustworthy : SLIMY