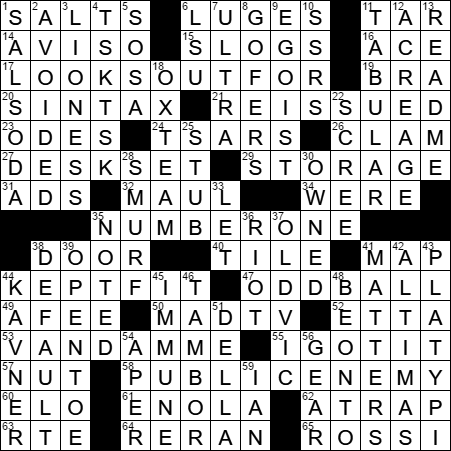 The active ingredient in smelling salts is usually ammonium carbonate, which releases ammonia gas when mixed with alcohol. When the activated salts are held under the nose, the ammonia irritates the mucous membranes causing an inhalation reflex action.

“MADtv” is a television sketch show that ran for fourteen seasons starting in 1995. The show had nothing to do with the famous “Mad” magazine, although it did license the name and logo from the publication.

Jean-Claude Van Damme is a Belgian actor and expert in martial arts. Given his background, he is referred to by the nickname “The Muscles from Brussels”.

“Timecop” is an entertaining sci-fi movie released in 1994, starring Jean-Claude Van Damme as US federal agent who tracks down criminals with the aid of time travel.

That would be a call made on a baseball diamond.

Sodium carbonate is a well known as a water softener sold for use in laundry, and is variously described as Sal Soda, Washing Soda and Soda Crystals.

The LSU Tigers are the sports teams of Louisiana State University (LSU). They are officially known as the Fightin’ Tigers, and the school mascot is “Mike the Tiger”. The name comes from the days of the Civil War, when two Louisiana brigades earned the nickname the “Louisiana Tigers”. Given the French/Cajun history of Louisiana, the LSU fans use the cheer “Geaux Tigers” instead of “Go Tigers”.

When a rock face erodes, lumps of rock and dust fall to the ground. The pile of rocks gathered around the rock face is called scree, a word derived from the old Norwegian term for a landslide.

The Old Vic is a very famous theater (or I should I say “theatre”?) in London, previously known as the Royal Coburg Theatre and then the Royal Victorian Theatre (giving it the current name “The Old Vic”). The theater owes a lot of its fame and standing to the fact that it housed the National Theater of Great Britain after it was founded in 1963 by Sir Laurence Olivier. Today the National Theater has new, modern premises, but the Old Vic Theatre Company stills garners a lot of attention. The current, and very energetic, artistic director of the company is American actor, Kevin Spacey.

The platypus (plural “platypuses” or “platypi”) is one of only five mammalian species that we know of that lay eggs rather than give birth to live young. The platypus is a native of Eastern Australia, and it is a weird creature to say the least. It’s appearance is bizarre enough, with it’s bill that resembles that of a duck, but it is also poisonous. The platypus has a spur on it hind foot that can inject venom and cause severe pain in humans.

Julie Kavner is an actress whose big break came playing the role of Brenda Morgenstern on the sitcom “Rhoda” in the 1070s. Nowadays, she is known for voicing Marge Simpson on “The Simpsons”. Kavener leads a very, very private life. She even has a clause in contract with the producers of “The Simpsons” that she never has to promote the show on video.

Jeffrey Tambor is an actor who achieved the big time playing Hank Kingsley, the talk show sidekick on “The Larry Sanders Show”. Tambor is now making a name for himself playing the transgender central character on the Amazon show “Transparent”.

In the “James Bond” series of novels, author Ian Fleming used the name “M” for the head of MI6. Fleming himself worked in the British Intelligence services during WWII, and he was well aware that actual leaders of the MI6 used single letters as signatures, a tradition that started just prior to WWI with Captain Mansfield Smith-Cumming, who signed documents with a letter C.

17. Prioritizes self-interest : LOOKS OUT FOR (number one)

29. Alternative to throwing out : STORAGE

58. Object of a serious hunt : PUBLIC ENEMY (number one)

18. Ones working together on a farm : OX TEAM