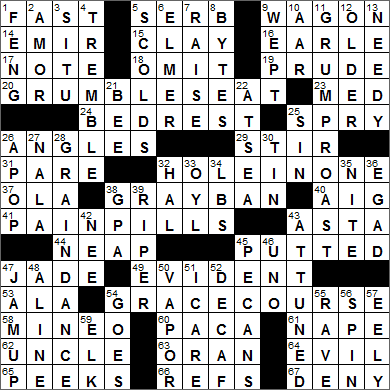 CROSSWORD SETTER: Jerome Gunderson
THEME: G-Fronts … each of today’s themed answers is a well-known word or phrase, but with a letter G added at the start:

Today’s Wiki-est, Amazonian Googlies
Across
5. Balkan native SERB
Serbs are an ethnic group native to the Balkans in southeastern Europe. Although Serbs exist as a minority group in many countries in the region, they are the majority ethnic group in Serbia, in Montenegro and in Bosnia and Herzegovina.

14. Arabian prince EMIR
An emir is a prince or chieftain, most notably in the Middle East. In English, “emir” can also be written as “amir” and “ameer” (watch out for those spellings in crosswords!).

16. Country-rock artist Steve EARLE
Steve Earle is an American songwriter and performer, with a reputation as a man who has lived a hard life. Earle’s brushes with the law and drug addiction problems have earned him the nickname “the hardcore troubadour”.

20. Place for a nagging passenger? GRUMBLE SEAT (G + “rumble seat”)
A rumble seat is an exterior seat found in pre-WWII cars that opens out from the rear of the vehicle. Back in the 1800s, a “rumble” was a seat in the rear of a carriage that was used by servants. A car’s rumble seat was also called a “mother-in-law seat”.

32. Its maker traditionally buys the drinks HOLE-IN-ONE
One well-documented hole-in-one was during a round of the British Open in 1973. American golfer Gene Sarazen achieved the feat that day, at the age of 71. A less well-documented series of holes-in-one was reported by the North Korean press in a story about the Korean leader Kim Jong-il. The report was that Kim Jong-il scored 11 holes-in-one in his first and only round of golf.

37. Pay back? -OLA
Payola is the illegal practice of paying radio stations or disk jockeys to repeatedly play a particular piece of music. The impetus behind the crime is that the more often a song is played, the more likely it is to sell. The term “payola” comes from the words “pay” and “Victrola”, an RCA brand name for an early phonograph.

38. Prohibition against Confederate soldiers? GRAY BAN (G + “Ray-Ban”)
Ray-Ban sunglasses were first introduced in 1937 for the US Army Air Corps. The Ray-Ban Aviator model of glasses became very popular with the pilots, and apparently with General Douglas MacArthur. MacArthur was wearing a pair when he was photographed “returning” to the Philippines in WWII.

40. Bailed-out insurance co. AIG
AIG is the American International Group, a giant insurance corporation (or I should say, “was”). After repeated bailouts by American taxpayers, the company made some serious PR blunders by spending large amounts of money on executive entertainment and middle management rewards. These included a $444,000 California retreat, an $86,000 hunting trip in England, and a $343,000 getaway to a luxury resort in Phoenix. Poor judgment, I’d say …

43. Movie role played by Skippy ASTA
Asta is the wonderful little dog in the superb “The Thin Man” series of films starring William Powell and Myrna Loy (as Nick and Nora Charles). In the original story by Dashiell Hammett, Asta was a female Schnauzer, but on screen Asta was played by a wire-haired fox terrier called “Skippy”. Skippy was also the dog in “Bringing up Baby” with Cary Grant and Katharine Hepburn, the one who kept stealing the dinosaur bone. Skippy retired in 1939, so Asta was played by other dogs in the remainder of “The Thin Man” films.

47. Weary from overuse JADE
Our term “jaded”, meaning tired and feeling a little “ho-hum”, comes from the noun “jade” which in the 14th century was an old, worn-out horse.

53. In the style of A LA
The phrase “in the style of” can be translated in “alla” in Italian and “à la” in French.

58. Sal of “Rebel Without a Cause” MINEO
The actor Sal Mineo’s most famous role was John “Plato” Crawford, the kid who was in awe of the James Dean character in “Rebel Without a Cause”. Sadly, Mineo was murdered in 1976 when he was just 37 years old. He was attacked in the alley behind his Los Angeles apartment and stabbed through the heart. When an arrest was made it was discovered that the murderer had no idea that his victim was a celebrity, and that his plan was just to rob anyone who came along.

60. South American rodent PACA
There are two species of rodents called pacas, and both are found in Central and South America. In some parts, paca is considered a gourmet dish.

63. Algerian port ORAN
Oran lies on the Algerian coast, and is famous for being the port where the French Navy was largely destroyed by the British during WWII in order to avoid the French vessels falling into the hands of Nazi Germany after France surrendered. This decisive and unexpected unilateral action by the British sent a very strong message around the world that Britain was willing to fight alone against the axis powers if necessary.

66. Zebras that don’t fear Lions? REFS
A football referee is sometimes called a “zebra”, a reference to the striped shirt that is part of a referee’s uniform.

Down
1. __ shui FENG
Feng shui is the ancient Chinese tradition of arranging objects, buildings and other structures in a manner that is said to improve the lives of the individuals living in or using the space. “Feng shui” translates as “wind-water”, a reference to the belief that positive and negative life forces ride the wind and scatter, but are retained when they encounter water.

3. In __: as found SITU
“In situ” is a Latin phrase meaning “in the place”, and we use the term to mean “in the original position”.

6. Funny Fudd ELMER
Elmer Fudd is one of the most famous of all the Looney Tunes cartoon characters, the hapless nemesis of Bugs Bunny. If you have never seen it, check out Elmer and Bugs in the marvelous “Rabbit of Seville”, a short cartoon that parodies Rossini’s “Barber of Seville”. Wonderful stuff …

10. Rhine tributary AAR
The Aar (also called the “Aare” in German) is the longest river entirely in Switzerland. A famous spot along the Aar is the Reichenbach Falls in the center of the country, actually a series of waterfalls near the city of Meiringen. These falls are renowned in the world of literature as it was here that Sherlock Holmes fell to his supposed doom with his nemesis Professor Moriarty (in “The Adventure of the Final Problem”).

22. On the briny AT SEA
The “briny” is the sea, from “brine” meaning “salty water”. The term “briny” was originally used for “tears”.

27. Simba’s mate NALA
In “The Lion King”, Nala is a lioness and the childhood friend of Simba.

30. English can TIN
Yep, in that part of the world we drink tins of Coke and eat tins of soup, not cans …

32. Kubrick’s computer HAL
In Arthur C. Clarke’s “Space Odyssey” (famously adapted for the big screen as “2001: A Space Odyssey”) the computer system that went rogue was called HAL 9000, or simply “HAL”. HAL stands for Heuristically programmed ALgorithmic computer. Even though, Clarke denied it, there’s a good argument that can be made that the acronym HAL is a veiled reference to IBM, the big player in the world of computing at the time of the novel’s publication (1968). The acronym HAL is just a one-letter shift from the initials “IBM”.

Stanley Kubrick was a film director from New York who worked mainly in the UK. Kubrick directed “Spartacus” in Hollywood in 1960, and then relocated to the UK to shoot “Lolita” in 1962. His next film was “Doctor Strangelove”, which also had to be shot in the UK. At that point Kubrick decided to make England his home.

33. Olive often rescued OYL
“Thimble Theater” was the precursor comic strip to the famous “Popeye” drawn by E. C. Segar. Before Popeye came into the story, the brother and sister characters Castor Oyl and Olive Oyl were the main protagonists. And then along comes a sailor …

34. Dumbbell abbr. LBS
The unit of mass that we know today as a “pound” is descended from the old Roman unit of weight known as a “libra”. That “libra” connection is why we abbreviate pound to “lb”. The name “pound” though comes from the Latin “pondo” meaning “weight”.

35. Nick at __ NITE
Nick at Nite is the name given to the late night programming aired on the Nickelodeon channel space. Nick at Nite started broadcasting in 1985 and was conceived as television’s first “oldies” television network.

42. Word between some last names NEE
“Née” is the French word for “born” when referring to a female. The male equivalent is “né”.

45. Praline nuts PECANS
A praline is a candy made made out of nuts and sugar syrup. The frist pralines were made in France in the 17th century for an industrialist named Marshal du Plessis-Praslin, who gave his name to the confection.

46. Low número UNO
In Spanish, one might count down to number one (número uno).

52. Joltless joe? DECAF
The first successful process for removing caffeine from coffee involved steaming the beans in salt water, and then extracting the caffeine using benzene (a potent carcinogen) as a solvent. Coffee processed this way was sold as Sanka here in the US. There are other processes used these days, and let’s hope they are safer …

59. Bugling beast ELK
Male elk are called bulls, and females are known as cows. Bull elk are known for their very loud screaming, which is called bugling. Cow elk are attracted to bulls that bugle more often and most loudly.