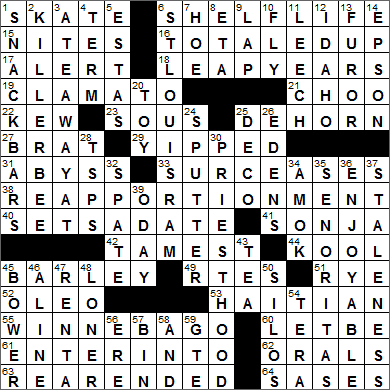 Today’s Wiki-est, Amazonian Googlies
Across
1. Ray in the water SKATE
Skates (formally “Rajidae”) are a family of fish in the superorder of rays (formally “batoidea”). Skates look very similar to stingrays but they lack stinging spines.

18. Periodic synchronizations LEAP YEARS
I wasn’t sure of the origin of the term “leap year”, and when I checked I found it to be fairly obvious. As a reference, let’s use March 25, 2007, a Sunday. The year before, in 2006, March 25th fell one weekday earlier on a Saturday, following the rule that each year any particular date moves forward in the week by one day. However, the next year (208) has an extra day, February 29th. So March 25, 2008 falls on a Tuesday, “leaping” two weekdays forward, not one, as 2008 is a “leap” year. I think I am more confused now then when I started this paragraph …

19. Key ingredient in a Bloody Caesar CLAMATO
Clamato is a drink made by Mott’s that is a blend of tomato juice and clam broth flavored with spices.The drink is intended to be reminiscent of Manhattan-style clam chowder.

The cocktail known as a Caesar is reminiscent of a Bloody Mary, and so is often referred to as a Bloody Caesar. It’s basically a Bloody Mary with the addition of clam juice. The clam juice comes as part of Clamato, a proprietary blend of tomato juice and clam broth. The Caesar was invented in 1969 by restaurateur Walter Chell in Calgary Alberta. Although very popular in Canada, the drink isn’t seen very often in the US.

21. High-fashion shoemaker Jimmy CHOO
Jimmy Choo is a designer of handmade women’s shoes who was born in Malaysia but grew up and was educated in London. Choo sold the 50% stake that he had in his shoe manufacturing company in 2001, for 10 million pounds.

23. Chef’s introduction? SOUS-
The “Sous-Chef de Cuisine” is the “under chef of the kitchen”, the second-in-command.

27. Frank’s cousin BRAT
A bratwurst (sometimes “brat” in the US) is a German sausage. The name comes from “brät-” meaning “finely chopped meat”, and “Wurst” meaning “sausage”.

There are really two types of hot dog sausage produces in North America. Both are made from meat trimmings and fat, flavorings such as salt and garlic, and preservatives. The meat in the hot dog sausage called a “wiener” tends to be mainly pork. The meat in sausages known as “franks” is mainly beef.

31. 1989 James Cameron film, with “The” ABYSS
“The Abyss” is a 1989 sci-fi movie from James Cameron about an underwater rescue team who encounter alien lifeforms in the deep. Stars of the film are Ed Harris and Mary Elizabeth Mastrantonio.

33. Discontinues SURCEASES
To surcease is a desist, cease from an action. New to me …

38. House adjustment REAPPORTIONMENT
In the process known as “reapportionment”, the US federal government periodically reallocates congressional seats to the states based on changing populations.

41. 1932 Lake Placid gold medalist SONJA
Sonja Henie was a World and Olympic Champion figure skater from Norway from the days when “amateur” sports stars were not paid. Henie made up for her lack of income from competing by developing a career in Hollywood. She was one of highest-paid film stars at the height of her movie career.

The 1932 Lake Placid games were the first Olympics in which the figure skating competitions were held indoors.

45. Malting material BARLEY
Malt is germinated cereal grains that have been dried. The cereal is germinated by soaking it in water, and then germination is halted by drying the grains with hot air.

53. Native whose land has an Atlantic and Caribbean coastline HAITIAN
The Republic of Haiti occupies the smaller, western portion of the island of Hispaniola in the Caribbean. The rest of the island is taken up by the Dominican Republic. Haiti is one of only two nations in the Americas to have French as an official language, the other being Canada.

55. Nebraska tribe WINNEBAGO
The Winnebago Tribe of Nebraska takes it name from the Fox River that flows below what is now named Lake Winnebago in eastern Wisconsin. The muddy water of the river led to the people nearby being named “winepyekoha” in the Potawatomi language, which translates as “person of the dirty water”.

In the world of publishing, the slush pile is the collection of unsolicited manuscripts that have been submitted by hopeful authors.

Down
2. First recurring “SNL” character KILLER BEE
“The Killer Bees” was the first recurring sketch to appear on “Saturday Night LIve”, making its debut in 1975. The skit featured most of the cast dressed in yellow and black stripes, with wings and spring antennae. “The Killer Bees” turned up 11 times in the show’s first season, but only three times in the following five years.

5. Spanish pronoun ESTAS
The Spanish word “estas” translates as “this, these”.

7. Masonry tool HOE
A masonry how looks rather like a gardening hoe. It is used to mix mortar and has a long handle for convenience, to avoid having to bend.

8. Seventh of 24 ETA
Eta is the seventh letter of the Greek alphabet, and is a forerunner of our Latin character “H”. Originally denoting a consonant, eta was used as a long vowel in Ancient Greek.

10. 1986 Jeff Goldblum film, with “The” FLY
The 1986 sci-fi horror film “The Fly” stars Jeff Goldblum as a scientist who gradually turns into a fly-like creature as the result of a teleportation experiment that goes awry. The 1986 film is loosely based on a 1957 short story by George Langelaan. I saw the original 1958 movie adaptation of that story and it really scared me, so I have avoided the two sequels and the 1986 remake …

12. Wyoming neighbor IDAHO
Idaho has the nickname the Gem State, mainly because almost every known type of gemstone has been found there. Idaho is also sometimes called the Potato State as potatoes are such a popular crop in the state.

Wyoming is nicknamed the “Equality State”, and the state’s motto is “equal rights”. Wyoming was the first state to give women the vote, and the first to allow women serve on juries. It was also the first state to have a female governor, Nellie Tayloe Ross, who took office in 1925.

14. Big name in printers EPSON
Seiko Epson is a Japanese company, one of the largest manufacturers of printers in the world. The company has its roots in the watch business, roots that go back to 1942. Seiko was chosen as the official timekeeper for the 1964 Summer Olympics in Tokyo and was asked to supply a timer that produced a printed record. This request brought Seiko into the business of printer production. The company developed the world’s first mini-printer for the 1964 Games and called it EP-101 (EP standing for Electronic Printer). In 1975 Seiko introduced the next generation of EP printers which was called EPSON, from “SON of EP”. Cute, huh?

28. Rx amts. TSPS
There seems to some uncertainty about the origin of the symbol “Rx” that’s used for a medical prescription. One explanation is that it comes from the astrological sign for Jupiter, a symbol put on prescriptions in days of old to invoke Jupiter’s blessing to help a patient recover.

34. Frenzily AMOK
The phrase “to run amok” (sometimes “to run amuck”) has been around since the 1670s and is derived from the Malay word for “attacking furiously”, “amuk”. The word “amok” was also used as a noun to describe Malay natives who were “frenzied”. Given Malaya’s troubled history, the natives probably had good reason for that frenzy …

35. Misses at many bullfights SENORITAS
Señorita (Srta.) is Spanish, and mademoiselle (Mlle.), is French for “Miss”.

39. Jazz singer Anita O’DAY
Anita O’Day was the stage name of the jazz singer Anita Colton. O’Day had problems with heroin and alcohol addiction leading to erratic behavior and earning her the nickname “The Jezebel of Jazz”.

43. Word with caddy or ball TEA
A caddy is a container used for tea. “Caddy” comes from the Malay word “kati”, a unit of weight used as a standard by British tea companies in the East Indies.

A tea ball or tea egg is more usually called a tea infuser. It is basically a ball, made of perforated metal or mesh, into which loose tea is placed. It has been superseded by the modern tea bag. I drink an awful lot of tea, and have a tea ball here at the house. Trust me, life is a lot easier using tea bags …

45. Shaded recess BOWER
Our word “bower” comes from the Old English “bur” meaning a hut or dwelling. We’ve been using “bower” to mean a “leafy arbor”, a “dwelling” defined by surrounding trees, since way back in the 1500s.

47. __-Wreck RENT-A
Rent-A-Wreck is a low-cost car rental agency that was founded in 1968 in Los Angeles. The company mainly operates in neighborhood locations, leaving the airports to the mainstream rental agencies.

50. Storage areas SILOS
“Silo” is a Spanish word that we absorbed into English, originally coming from the Greek word “siros” that described a pit in which one kept grain.

54. Prefix with hertz TERA-
The unit of frequency measure is the hertz (Hz) and is the number of cycles per second of a periodic phenomenon.

59. Onetime Bell Atlantic rival GTE
GTE was the largest of the independent telephone providers back in the days of the Bell System of companies. Some years after the breakup of the Bell Telephone Company, GTE merged with Bell Atlantic. forming the company that we know today as Verizon.