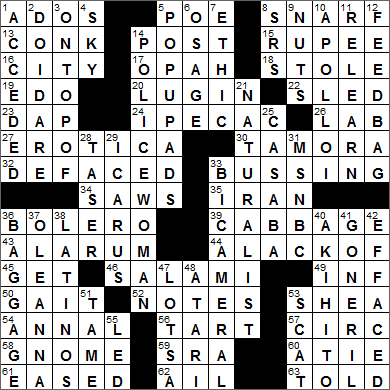 CROSSWORD SETTER: Bruce Haight
THEME: Notes … we have some musical grid art today, with three eighth-notes represented by the black squares going diagonally from top-left towards bottom-right. Also, our themed answers are written using only the letters A through G, the letters used to represent the notes of a musical scale:

52A. They’re graphically represented three times in this grid … and the answers to starred clues are the six longest common words than can be spelled using only them NOTES

Today’s Wiki-est, Amazonian Googlies
Across
5. He wrote about “a midnight dreary” POE
The first verse of Edgar Allan Poe’s “The Raven” is:

8. Gobble (up) SNARF
“To snarf down” is to gobble up, to eat voraciously. “Snarf” is a slang term that is probably related to “scarf”, which has the same meaning.

13. Die, with “out” CONK
The phrase “conk out” was coined by airmen during WWI, and was used to describe the stalling of an engine.

14. Blog entry POST
Many folks who visit this website regard it as just that, a website. That is true, but more correctly it is referred to as a blog, as I make regular posts (actually daily posts) which then occupy the “front page” of the site. The blog entries are in reverse chronological order, and one can just look back day-by-day, reading older and older posts. Blog is a contraction of the term “web log”.

15. Capital of India RUPEE
The rupee is a unit of currency, used in India, Sri Lanka, Nepal and Pakistan. The term “rupee” comes from the Sanskrit word “rupya”, which once meant “stamped, impressed” and then “coin”.

17. Colorful fish OPAH
Opah is the more correct name for the fish also known as the sunfish, moonfish or Jerusalem haddock. I’ve seen one in the Monterrey Aquarium. It is huge …

19. Old Tokyo EDO
Edo is the former name of the Japanese city of Tokyo. Edo was the seat of the Tokugawa shogunate, a feudal regime that ruled from 1603 until 1868. The shogun lived in the magnificent Edo castle. Some parts of the original castle remain and today’s Tokyo Imperial Palace, the residence of the Emperor of Japan, was built on its grounds.

23. High-five relative DAP
The dap is a form of handshake, nowadays often a complicated and showy routine of fist-bumps, slaps and shakes. Some say that “dap” is an acronym standing for “Dignity And Pride”.

24. Poison remedy IPECAC
Syrup of ipecac is a preparation made from the dried roots and rhizomes of the ipecacuanha plant. The syrup is used as an emetic, a substance that induces vomiting. Ipecac accomplishes this by irritating the lining of the stomach.

32. *Vandalized, in a way DEFACED
A “vandal” is someone who destroys some beautiful or valuable. The term comes from the Germanic tribe called the Vandals who sacked Rome in the year 455. Our contemporary term “vandalism” was coined by Henri Grégoire in 1794, when he was describing the destruction of artwork during the French Revolution.

36. Ravel classic BOLERO
Maurice Ravel was a great French composer of the Romantic Era. His most famous piece of music by far is his “Bolero”, the success of which he found somewhat irksome as he thought it to be a trivial work. Personally though, I love the minimalism and simplicity …

43. Old-style warning ALARUM
“Alarum” is an archaic spelling of our contemporary “alarm”, and a spelling oft used by William Shakespeare in his plays.

46. Deli staple SALAMI
Salame (note the “e” at the end) is an Italian sausage that is traditionally associated with the peasant classes. The meat in the sausage is preserved with salt, and it can be hung and stored for as long as ten years. The name “salame” comes from “sale”, the Italian word for salt, and “-ame”, a suffix indicating a collective noun. Our English word “salami” is actually the Italian plural for “salame”.

53. 2000 World Series venue SHEA
Shea Stadium in Flushing Meadows, New York was named after William A. Shea, the man credited with bringing National League baseball back to the city in the form of the New York Mets. Shea Stadium was dismantled in 2008-2009, and the site now provides additional parking for the new stadium nearby called Citi Field.

The 2000 World Series was the first postseason Subway Series since 1956. The term “Subway Series” has been used to describe World Series baseball games when both participating teams are based in New York. In 2000, the New Yankees defeated the New York Mets, four game to one.

54. Yearbook, e.g. ANNAL
“Annal” is a rarely used word, the singular of the more common “annals”. An annal would be the recorded events of one year, with annals being the chronological record of events in successive years. The term “annal” comes from the Latin “annus” meaning “year”.

57. Newspaper fig. CIRC
A newspaper’s sales figures are referred to as its circulation (circ.).

58. Little garden party? GNOME
In English folklore, the lovable fairy’s anti-hero is the diminutive gnome, an evil ugly character. Over the centuries, the gnome has become more lovable so we now have garden gnomes and even the Travelocity Gnome …

Mazatlán is a city in Mexico on the Pacific coast sitting right opposite the southern tip of the Baja California peninsula.

Down
6. Oklahoma county in which a 2008 Pulitzer-winning drama is set OSAGE
“August: Osage County” is a dark comedy play by Tracy Letts that won a 2008 Pulitzer Prize for Drama. I saw the 2013 movie adaptation that has a great cast including Meryl Streep, Julia Roberts, Ewan McGregor, and Benedict Cumberbatch. I really enjoyed it …

8. Many AARP mems. SRS
AARP is now the official name for the interest group that used to be called the American Association of Retired Persons. The name change reflects the current focus of the group on all Americans aged 50 or over, as opposed to just people who have retired.

10. Ill-fated 1967 mission APOLLO I
Apollo 1 was planned to be the first manned mission in NASA’s lunar landing program. Sadly, the three crew members perished in a tragic cabin fire that took place in a launch pad test. The astronauts who died were Gus Grissom (the second American to fly in space), Edward White (the first American to walk in space) and Roger Chaffee (the pilot for the planned Apollo 1 mission).

21. Darwin, for one NATURALIST
Englishman Charles Darwin studied medicine at the University of Edinburgh in Scotland but neglected his studies largely due to his interest in nature and natural history. In the early 1830s, a friend put forward Darwin’s name as a candidate for the post of “collector” on the voyage of HMS Beagle. The Beagle was intending to spend two years at sea primarily charting the coast of South America. The voyage ended up taking five years, during which time Darwin sent back copious letters describing his findings. Back in Britain these letters were published as pamphlets by a friend and so when Darwin eventually returned home in 1836, he had already gained some celebrity in scientific circles. It was while on the Beagle that Darwin developed his initial ideas on the concept of natural selection. It wasn’t until over twenty years later that he formulated his theories into a scientific paper and in 1859 published his famous book “On the Origin of the Species”. This original publication never even mentioned the word “evolution” which was controversial even back then. It was in 1871 that Darwin addressed head-on the concept that man was an animal species, in his book “The Descent of Man, and Selection in Relation to Sex”.

25. Fruit named for a Turkish town CASABA
A casaba is type of honeydew melon. The casaba takes its name from the Turkish city of Kasaba, from where the fruit was imported into America in the late 1800s.

29. Legendary flier ICARUS
Daedalus was a master craftsman of Greek mythology who was tasked with creating the Labyrinth on the island of Crete that was to house the Minotaur. After the Labyrinth was completed, King Minos imprisoned Daedalus and his son Icarus in a tower, so that he could not spread word of his work. Daedalus fabricated wings so that he and Icarus could escape by flying off the island. Despite being warned by his father, Icarus flew too close to the sun so that the wax holding the wings’ feathers in place melted. Icarus drowned in the sea, and Daedalus escaped.

31. “Morning Joe” airer MSNBC
“Morning Joe” is a show broadcast by MSNBC each weekday morning. It is hosted by Joe Scarborough, and first went on the air in 2007. Given the name of the show, Starbucks were very content being the show’s sponsor from 2009 through 2013, and got lots of product placement.

33. Like Congress BICAMERAL
The US Congress is described “bicameral” in that it is divided into two separate assemblies, namely the Senate and the House of Representatives. The term “bicameral” comes from the prefix “bi-” meaning “two”, and the Latin “camera” meaning “chamber”.

37. 1992 Mamet play OLEANNA
I’ve never seen it, but “Oleanna” sounds like a powerful play to me. Written by David Mamet, it was first performed in 1992. It’s a two-person piece, the tale of a university professor and a female student who accuses him of sexual exploitation.

38. Fast-growing U.S. ethnic group LATINOS
“Hispanic” comes from the Latin word for “Spain”, and refers all Spanish-speaking peoples around the world. “Latino” refers to people from Latin America, who might not necessarily speak Spanish (e.g. Brazilians).

41. Regan’s poisoner, in Shakespeare GONERIL
“King Lear” is one of William Shakespeare’s tragedies. Lear’s three daughters figure prominently in the storyline. The three are, in order of age:

48. Asteroids maker ATARI
I remember being quite addicted to the Atari video arcade game called “Asteroids” back in the early eighties. Apparently I wasn’t the only one, as “Asteroids” was Atari’s best selling game of all time.