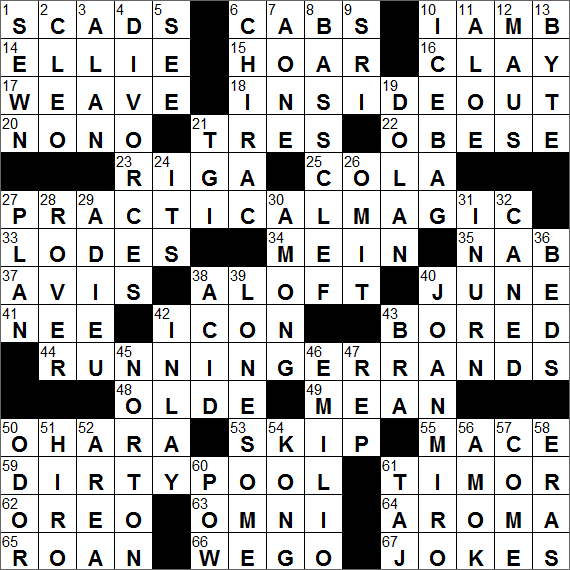 Theme: Open with a Joke

Today’s themed answers each start with a type of JOKE:

An iamb is a metrical foot containing an unstressed syllable followed by a stressed syllable. Robert Frost’s “Stopping by the Woods on a Snowy Evening” consists of lines made up of four sequential iambs e.g. “Whose woods / these are / I think / I know”. With a sequence of four iambs, the poem’s structure is described as iambic tetrameter.

The actress Ellie Kemper’s big break came with the role of Erin Hannon, a receptionist on the sitcom “The Office”. More recently, Kemper has be playing the title role on the Netfliz comedy series “Unbreakable Kimmy Schmidt”.

There are four different surfaces used for playing tennis competitively:

“Practical Magic” is a 1998 romcom starring Sandra Bullock and Nicole Kidman as two sisters who are raised as witches. The film is based on a 1995 novel of the same name written by Alice Hoffman.

48…Word on a shoppe sign..OLDE

Scarlett O’Hara’s home is the Tara plantation, in Margaret Mitchell’s “Gone with the Wind”. Tara was founded not far from the Georgia city of Jonesboro by Scarlett’s father, Irish immigrant Gerald O’Hara. Gerald won the square mile of land on which Tara was built in an all-night poker. He named his new abode after the Hill of Tara back in his home country, the ancient seat of the High King of Ireland.

In my youth I remember being taught a great card game, by a German acquaintance of mine, called Mau Mau. Years later I discovered that Uno is basically the same game, but played with a purpose-printed deck instead of the regular deck of playing cards that’s used for Mau Mau. I hear that Mau Mau is derived from the game called Crazy Eights.

A mace is a relatively simple weapon in essence, a heavy weight on the end of a handle that is used to deliver powerful blows on an opponent’s body.

The 1963 movie “Cleopatra” really was an epic work. It was the highest grossing film of the year, taking in $26 million dollars at the box office, yet it still lost money. The original budget for the film was just $2 million, but so many things went wrong the final cost swelled to a staggering $44 million dollars, making it the second most expensive movie ever made (taking into account inflation). Elizabeth Taylor was supposed to earn a record amount of $1 million for the film, and ended up earned seven times that amount due to delays. But she paid dearly, as she became seriously ill during shooting and had to have an emergency tracheotomy to save her life. The scar in her throat can actually be seen in some of the shots in the film.

Alan Greenspan served as the Chairman of the Federal Reserve from 1987 to 2006, the longest anyone has held that post. He was appointed by President Reagan for a four-year term, and was reappointed by subsequent presidents until Greenspan retired. Outside of the world of economics, Greenspan is married to NBC journalist Andrea Mitchell, and back in the seventies he dated Barbara Walters.

Actress Elizabeth Taylor married eight times, to seven husbands. Those marriages were to:

Jacques Chirac served as French President from 1995 to 2007. He also served twice as Prime Minister of France, and as the Mayor of Paris.

Aloe vera has a number of alternate names that are descriptive of its efficacy as a medicine. These include the First Aid plant, Wand of Heaven, Silent Healer and Miracle Plant.

12…Rodent in a German lab..MAUS

19…Ken or Daria of financial journalism..DOLAN

Husband and wife Ken and Daria Dolan are sometimes referred to as “The First Family of Finance”. They are both authors of book on personal finance management, and also co-anchored the show “Dolans Unscripted” on CNN.

There have been several rovers sent to Mars from Earth. The Soviet Union’s Mars 2 landed in 1971, and failed. Mars 3 landed the same year, and ceased operation just 20 seconds after landing. NASA’s Sojourner landed in 1997 (what a great day that was!) and operated from July through September. The British rover Beagle 2 was lost six days before its scheduled entry into the Martian atmosphere. NASA’s Spirit landed in 2004, and operated successful for over six years before getting trapped in sand and eventually ceasing to communicate. NASA’s Opportunity also landed in 2004, and it is still going. And then NASA’s Curiosity made a spectacular, hi-tech landing in 2012 and is continuing to explore the planet today.

Joan Miró was a Spanish artist. Miro immersed himself in Surrealism, so much so that Andre Breton, the founder of the movement, said that Miro was “the most Surrealist of us all”.

46…Estevez of “The Breakfast Club”..EMILIO

Emilio Estevez is one of the members of Hollywood’s famous “Brat Pack”, having appeared in “The Breakfast Club” and “St. Elmo’s Fire”. Estevez’s father (and can’t you tell it from looking at him?) is actor Martin Sheen. Estevez decided to keep his father’s real name, and not the stage name of “Sheen”. Charlie Sheen is Emilio’s brother, and Charlie’s real name is Carlos Estevez.

“The Breakfast Club” is a fabulous teen drama film (a genre which I usually avoid like the plague) released in 1985. It is directed by John Hughes, and stars Judd Nelson, Emilio Estevez, Anthony Michael Hall, Molly Ringwald and Ally Sheedy as the students at a Saturday school detention class.

“Big Hero 6” is a team of superheroes in the Marvel Comics universe. They are a relatively new creation, introduced in 1998. “Big Hero 6” appeared in their own Disney animated film in 2014.

The first video game featuring the ape called Donkey Kong was created in 1981. That first “Donkey Kong” game also introduced the world to the character known as “Mario”, four years before “Super Mario Bros” became such a big hit.

The most famous mausoleum in the world has to be the Taj Mahal in Agra, India. The Taj Mahal was built after the death of the third wife of Shah Jahan, Mumtaz Mahal (hence the name of the mausoleum). The poor woman died in childbirth delivering the couple’s 14th child.

18…How some sloganed T-shirts should be washed..INSIDE OUT (giving “inside joke”)

48…Word on a shoppe sign..OLDE

67…Some speeches open with them … as do this puzzle’s four longest entries..JOKES

12…Rodent in a German lab..MAUS

19…Ken or Daria of financial journalism..DOLAN

27…Word after floor or flight..PLAN

39…In need of a friend..LONESOME

46…Estevez of “The Breakfast Club”..EMILIO