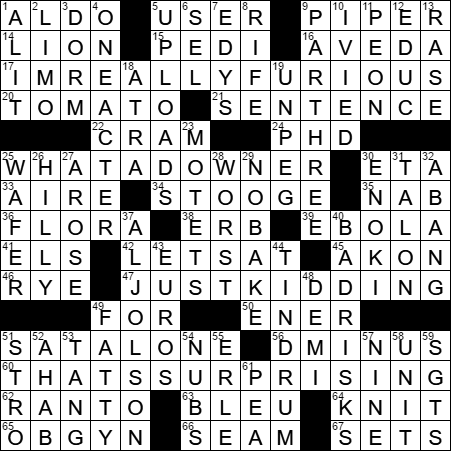 Today’s themed clues are all emoticons, with the answers expressing the meanings intended by each emoticon:

Horst Rechelbacher was travelling in India in 1970 when he was introduced to the Hindu science of longevity called Ayurveda, which inspired him to set up his own company of skin and hair care products that he called Aveda. The company opened its doors in 1978 and is based in Blaine, Minnesota.

An emoticon is a glyph created using text characters to represent facial features, and usually oriented sideways. The emoticon is designed to indicate emotion or attitude. The classic example is the smiley face 🙂

Gazpacho is a cold soup made from vegetables in a tomato base. It originated in Andalusia in southern Spain.

Frigidaire made the first self-contained refrigerator in 1916. Just three years later, the company was taken over by General Motors, who owned it right up to 1979. Frigidaire also made the first home freezer and room air conditioner.

Edgar Rice Burroughs (ERB) was an author from Chicago who is best known as the creator of the “Tarzan” series of novels. Burroughs’ daughter Joan ended up marrying James Pierce, the actor who was the fourth to portray Tarzan on film. James and Joan Pierce also worked together, playing Tarzan and Jane on the radio show “Tarzan” from 1932 to 1934.

Akon is a Senegalese American R&B and hip hop singer, who was born in St. Louis but lived much of his early life in Senegal. Akon is a stage name, and his real name is Aliaune Damala Bouga Time Bongo Puru Nacka Lu Lu Lu Badara Akon Thiam. Got that?

50. Cabinet dept. with an Office of Science : ENER

Being a bit of a French speaker (admittedly a very poor one), the term “bleu” cheese has always kind of irritated me. I would prefer that we use either “blue cheese” or “fromage bleu” and not mix the languages, but then I can be annoyingly picky! It’s said that blue cheese was probably discovered accidentally, as molds tend to develop in the same conditions that are best for storing cheese. The blue mold in the cheese is introduced by adding Penicillium spores before the cheese is allowed to set. And yes, it’s the same mold that is used to produce penicillin, the antibiotic.

“Digs” is short for “diggings” meaning “lodgings”, but where “diggings” came from, no one seems to know.

In French, one might season one’s food with “sel” (salt) and “poivre” (pepper).

9. Where many aces can be seen : PAR THREE

To “raze” (“rase”, in UK English) is to level to the ground. I’ve always thought it odd that “raise”, a homophone of “raze”, means to build up.

Devon is a county in the southwest of England. The county town of Devon is Exeter, and the largest city in the county is Plymouth, the port from which the Mayflower Pilgrims departed.

Fortunately for crossword constructors, the Atra razor was introduced by Gillette in 1977. The Atra was sold as the Contour in some markets and its derivative products are still around today.

A motet is a simple musical composition based on a sacred text, usually sung without an accompaniment. The term “motet” is a diminutive form of “mot”, the French for “word”.

The Communion rite is the part of the Mass in the Roman Catholic tradition. The rite involves distribution of the Communion bread (the host, a wafer) to the faithful.

“Razzie” is the familiar name for the Golden Raspberry Award, an award presented annually for the worst in the world of film. The Razzies have been presented on the day before the Oscars since 1981.

The classic musical “The Jazz Singer” was released in 1927, and became the biggest box office success for the Warner Bros. to date. Famously, it was a “talkie”, and is now regarded as one of the films that signaled the impending end of the “silent era”. Star of the movie is Al Jolson, who performs six songs including “Toot, Toot, Tootsie (Goo’ Bye)” and “My Mammy”.

The Euro is the official currency of most of the states in the European Union, but not all. The list of states not using the Euro includes the UK, Denmark, Sweden and Norway.

“The Tin Drum” is a novel by German author Günter Grass that was first published in 1959. The book was a adapted into very successful 1979 film of the same name, which won that season’s Academy Award for Best Foreign Language Film.

A much-used pencil or crayon might be worn down to a “nub”.

55. Creator of Perry and Della : ERLE

An NCO or “noncom” is a non-commissioned officer in the armed forces. Usually such an officer is one who has earned his or her rank by promotion through the enlisted ranks. A good example would be a sergeant major (sgt. maj.).

50. Cabinet dept. with an Office of Science : ENER

9. Where many aces can be seen : PAR THREE

55. Creator of Perry and Della : ERLE