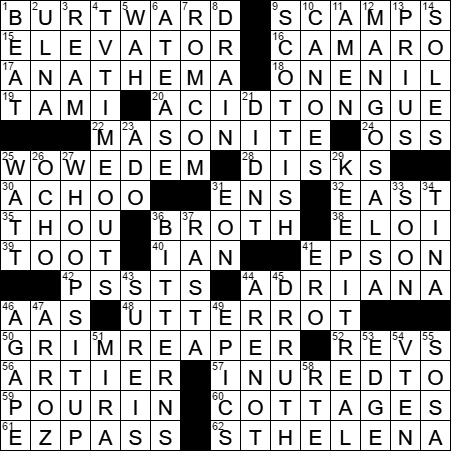 “Friday Night Lights” is a TV series about a high school football team in Texas. The television show was inspired by the book “Friday Night Lights: A Town, A Team, and a Dream”, as well as the 2004 movie based on the book. I binge-watched a few seasons of the TV show recently, and really enjoyed the characters and the writing …

William J. Donovan was the head of the Office of Strategic Services (OSS) during WWII. Given that the OSS was the precursor to the CIA, Donovan is known as the “Father of Central Intelligence”. Donovan was the only person to have received the Medal of Honor, the Distinguished Service Cross, the Distinguished Service Model and the National Service Medal, all four of the highest awards in the US.

An extra in “Star Trek” is often an ensign (ens.).

East St. Louis is a city in Illinois that is located right across the Mississippi River from St. Louis, Missouri. East St. Louis is home to a riverfront fountain called Gateway Geyser. The fountain sits opposite the Gateway Arch and shoots water about 630 feet into the air, which is the same height as the arch.

Jethro Tull is a rock band from the UK, formed in 1967 and active until 2012. The band uses the name of a 18th-century, English agriculturist.

Seiko Epson is a Japanese company, one of the largest manufacturers of printers in the world. The company has its roots in the watch business, roots that go back to 1942. Seiko was chosen as the official timekeeper for the 1964 Summer Olympics in Tokyo and was asked to supply a timer that produced a printed record. This request brought Seiko into the business of printer production. The company developed the world’s first mini-printer for the 1964 Games and called it EP-101 (EP standing for Electronic Printer). In 1975 Seiko introduced the next generation of EP printers which was called EPSON, from “SON of EP”. Cute, huh?

Drea de Matteo is an actress who is most familiar to me for playing Adriana la Cerva on HBO’s wonderful series “The Sopranos”. De Matteo also played Joey’s sister on the short-lived “Friends” spin-off called “Joey”, and the character Angie Bolen on “Desperate Housewives”.

The Grim Reaper one of the personifications of death, along with the Hooded One and the Angel of Death. Death has been depicted since the 1400s as a skeleton in a hooded, black cloak and carrying a scythe. The name “Grim Reaper” only dates back to the mid-1800s.

The island of Saint Helena in the South Atlantic is one of the most remote islands in the world. It was discovered by Galician explorer João da Nova, who was sailing under the Portuguese flag. He name the island after Helena of Constantinople, mother of Roman Emperor Constantine the Great. Famously, the British opted to exile Napoleon on Saint Helena soon after his defeat at the Battle of Waterloo in 1815. The former French emperor died on the island in 1821.

Scottish Terrier is another name for the Aberdeen Terrier, commonly referred to as the Scottie. One of the most famous Scotties in American history was Fala, the much-loved dog belonging to President Franklin D. Roosevelt. Also, the Scottie is famous as one of the playing pieces in the original game of Monopoly.

A “grace” is a short prayer recited before or after a meal.

The Toyota Prius is still the most fuel-efficient, gasoline-powered car sold in the US, according to the EPA. The name “Prius” is a Latin word meaning “ahead, leading”. In the US we pronounce the name “pree-us”, but across the Atlantic it’s pronounced “pry-us”. Oh, and I drive one …

“We Didn’t Start the Fire” is a 1989 song by Billy Joel. The lyrics are really quite unique, consisting mainly of over a hundred newspaper headlines from 1949 to 1989. Joel chose 1949 as it was the year of his birth.

“Much Ado About Nothing” is a play by William Shakespeare, and is a favorite of mine. It is a comedic tale of two pairs of lovers with lots of mistaken identities and double meanings. I once saw it performed in the fabulous Globe Theatre in London … by an all-female cast. Such a performance was somewhat ironic, given that in Shakespeare’s day the practice was to use an all-male cast.

Tina Brown is a British/American journalist and author. Brown wrote “The Diana Chronicles”, a biography of Diana, Princess of Wales, of whom Brown was a personal friend. She emigrated to the US in 1984 to become editor for “Vanity Fair”, and later took the helm at “The New Yorker”.

Bitterns are wading birds in the heron family. Unlike most of their heron cousins, bitterns tend to have short necks.

Dreadlocks are matted coils of hair nowadays usually formed intentionally, although if one lets hair grow out without grooming then it naturally forms twisted and matted dreadlocks. The hairstyle is associated with the Rastafarian movement in which “dread” is a very positive term meaning “fear of the Lord”.

The Greek myth of Hero and Leander gave rise to a couple of operas (one by Giovanni Bottesini and another by Arrigo Boito) and a more famous cantata from George Frideric Handel, all called “Ero e Leandro”.

Dr. Ruth Westheimer is a German sex therapist who made a name for herself as a media personality. Westheimer is the daughter of Orthodox Jews and was sent away from Germany by her family just before WWII. She ended up in Palestine and participated in the 1948 Palestine War serving as a scout and sniper. Westheimer was seriously wounded, and spent several months unable to walk. She moved to France in 1950, and soon after arrived in the US. It was in the US where she did her training as a sex therapist.

In Spanish, “pollo” (chicken) might be served with “arroz” (rice).

The engine known as a V10 is configured with two rows of five cylinders mounted on a crankcase. The rows of cylinders are offset from each other around the crankshaft at right angles, or perhaps a little less. This arrangement of ten cylinders in a V-shape gives rise to the name “V10”.

57. More than familiar with : INURED TO

4. Some breaks in the NFL action : TV TIMEOUTS

29. Contemporary “Be yourself” : KEEP IT REAL