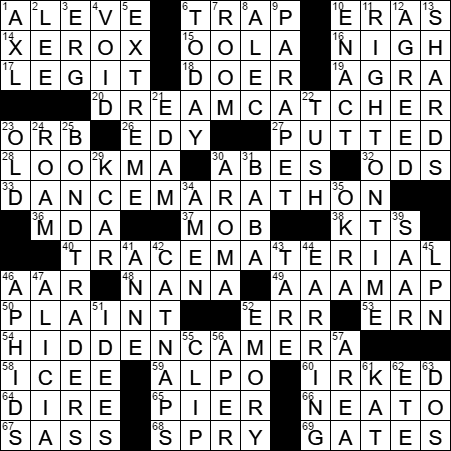 Each of today’s themed answers includes the HIDDEN letter grouping CAMERA. But, those letters are doubly hidden, because they’ve also been jumbled up, changed in order:

Xerox was founded in 1906 in Rochester, New York and originally made photographic paper and equipment. Real success came for the company in 1959 when it introduced the first plain-paper photocopier. Xerox named Ursula Burns as CEO in 2009, the first African American woman to head up a S&P 100 company. Burn was also the first woman to succeed another female CEO (replacing Anne Mulcahy).

Oola was a slave-girl dancer who was eaten by a scary creature in the movie “Star Wars Episode VI: The Return of the the Jedi”. Oola was played by British actor Femi Taylor.

Legend has it that Native American dream catchers, usually hung over the bed of a child, protect the infant by filtering out all bad dreams.

Dance marathons became popular in the US during the Great Depression. They are endurance events, at which spectators often pay to watch the competitors on the dance floor. By all accounts, dance marathons were pretty abusive affairs, effectively “reality TV” for the 1920s. Famously, a dance marathon provides the setting for the 1969 film “They Shoot Horses, Don’t They?”

“They Shoot Horses, Don’t They?” is a powerful 1969 film adaptation of a novel of the same name by Horace McCoy. It’s all about couples engaged in a dance marathon during the Great Depression. The marathon lasts weeks, and we get to see some very disturbing behavior as the exhausted contestants reach their physical and mental limits. At the end of the movie (spoiler alert!), the male leading character (played by Michael Sarrazin) shoots the female lead (played by Jane Fonda) in an assisted suicide. When the please ask the man why he shot the woman, he responds, “They shoot horses, don’t they?”

The world’s first telethon was took place in 1949. It was a 16-hour fundraiser hosted by Milton Berle that raised over a million dollars for the Damon Runyon Cancer Research Foundation. The term “telethon”, a portmanteau of “television” and “marathon”, was coined in the news media the day after the event. One of the most famous annual telethons was the Jerry Lewis MDA Labor Day Telethon, which raised funds for the Muscular Dystrophy Association for over twenty years, from 1966 until 2010.

Something described as “forensic” is connected with a court of law, or with public discussion or debate. The the term comes from the Latin “forensis” meaning “of a forum, of a place of assembly”. We mainly use the word today to mean “pertaining to legal trials” as in “forensic medicine” and “forensic science”.

Alpo is a brand of dog food first produced by Allen Products in 1936, with “Alpo” being an abbreviation for “Allen Products”. Lorne Greene used to push Alpo in television spots, as did Ed McMahon and Garfield the Cat, would you believe?

Guns N’ Roses is a hard rock band founded in 1985 that is still going strong. The group was pulled together by Axl Rose, the lead vocalist. The lead-guitar player back then was Tracii Guns, and it was the combination of Axl and Tracii’s “family” names that led to the band being called Guns N’ Roses.

NBC’s “Today” was launched in 1952, and was the first of the morning news/talk show on the US television. The show’s first host was Dave Garroway, who was at the helm until 1961. Back in those days, “Today” had a mascot who often appeared on air with Garroway: a chimpanzee named J. Fred Muggs.

Alec Baldwin is the oldest of the acting Baldwin brothers. I think Alec’s big break was playing Tom Clancy’s Jack Ryan in “The Hunt for Red October”, but thank goodness that role was taken over by Harrison Ford for the subsequent Jack Ryan movies. Baldwin also made a name for himself playing Jack Donaghy on “30 Rock”, opposite Tina Fey. More recently, he is known for impersonating Donald Trump on “Saturday Night Live”.

A parapet originally was a defensive wall, or a fortifying elevation above a main wall. We use the term now to describe several different structures, often a guard rail on a staircase or a roof. “Parapet” comes from the Italian “parapetto”, which in turn comes from “parare” (to cover, defend) and “petto” (breast).

A “rampart” is a raised embankment, mound of earth, or length of wall that is used as a fortification. Ramparts often surround castles and forts.

“To gad about” is to move around with little purpose. The word “gad” comes from the Middle English “gadden” meaning “to hurry”.

Rum baba (also “baba au rhum” in French) is a small yeast cake saturated in rum, and sometimes filled with whipped cream. Rum baba is derived from the recipe for the tall “babka” yeast cake that was introduced to the world by the Polish communities. The Polish words “baba” and “babka” mean “old woman” or “grandmother” in English. I guess someone must have thought that all grandmothers were saturated in rum!

Saarland, often referred to in English as “the Saar”, is one of Germany’s sixteen federal states and is located in the west of the country, on the borders with France and Luxembourg. Saarland is named for the Saar River that runs through the state. There is a lot of industry in the Saar region, historically “fueled” by the region’s plentiful supply of coal.

A licensed practical nurse (LPN) might work in an operating room (OR) or an intensive care unit (ICU).

Aphids are called “greenfly” back in the British Isles where I come from. The most effective way to control aphids in my experience is to make sure there are plenty of ladybugs in the garden (called ladybirds in Ireland!).

52. Bishop John for whom a Georgia university was named : EMORY

Emory is a private school in Atlanta, Georgia with a focus on graduate research. The school was named after a Methodist Episcopal bishop called John Emory, who was very popular at the time of the school’s founding in 1836.

Kat Dennings is the stage name of actress Katherine Litwack, noted today for her co-starring role on CBS’s sitcom “2 Broke Girls”. Dennings is an avid blogger, and you can check out her video blog on YouTube.

52. Bishop John for whom a Georgia university was named : EMORY

57. One-half base times height, for a triangle : AREA