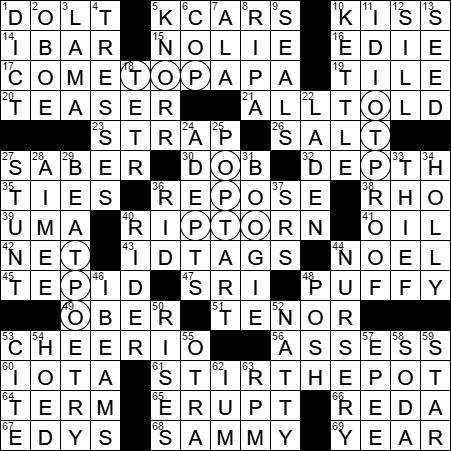 Today’s themed answers each include a string of three circled letters in the grid. That string comprises the letters POT rearranged, STIRRED up:

The Dodge Aries (and the Plymouth Reliant) were Chrysler’s first “K-cars”, introduced in 1981. The K-cars were designed to carry 6 passengers, on two bench seats. Remember taking a corner a little too fast on those seats, in the days when no one wore seat belts?

A satchel is a soft-sided bag, usually with a strap that is often worn diagonally across the body. When we were kids in Ireland, we’d carry our books to and from school in a backpack satchel. All Irish schoolchildren had a satchel back then.

A saber is a sword with a curved blade and a relatively large hand guard. It is thought that the term originated with the Hungarian verb “szabni” meaning “to cut”.

Robert Thurman was the first westerner to be ordained a Tibetan Buddhist monk. Robert raised his children in the Tibetan Buddhist tradition and called his daughter “Uma” as it is a phonetic spelling of the Buddhist name “Dbuma”. Uma’s big break in movies came with her starring role in Quentin Tarantino’s 1994 hit “Pulp Fiction”. My favorite Uma Thurman film is the wonderful 1996 romantic comedy “The Truth About Cats and Dogs”.

Rip Torn is the actor who played the veteran television producer Artie on “The Larry Sanders Show”. That said, I always associate Torn with the role of Agent Zed in the “Men in Black” movies. Torn was married three times, to actresses Ann Wedgeworth, Geraldine Page and Amy Wright. His first cousin is actress Sissy Spacek. “Rip” is a nickname that runs in the Torn family. The actor was born Elmore Rual Torn, Jr.

“Noël” is the French word for the Christmas season, ultimately coming from the Latin word for “birth” (natalis). Noel has come to be used as an alternative name for a Christmas carol.

Ulm is in the south of Germany and sits on the River Danube. Ulm is famous as home to the tallest church in the world, Ulm Minster, a Gothic building with a steeple that is 530 feet tall, with 768 steps to climb. Ulm is also the birthplace of Albert Einstein, and is where the entire Austrian army surrendered to Napoleon after the Battle of Ulm in 1805.

Mount Vesuvius is on the Bay of Naples, just over five miles from the city of Naples. The most famous of the volcano’s eruptions took place in AD 79, the one which destroyed the Roman cities of Pompeii and Herculaneum. Today, Vesuvius is considered to be one of the most dangerous volcanoes in the world, largely because it is at the center of the most densely populated volcanic region in the world, with 3 million people living nearby.

66. Scarlet letter of fiction : RED A

The main character in Nathaniel Hawthorne’s novel “The Scarlet Letter” is Hester Prynne. When Prynne is convicted by her puritanical neighbors of the crime of adultery, she is forced to wear a scarlet “A” (for “adultery”) on her clothing for the rest of her life, hence the novel’s title “The Scarlet Letter”.

Rock vocalist and guitarist Sammy Hagar achieved fame in the seventies as a member of the group Montrose. He then carved out a successful solo career, and in 1985 took over from David Lee Roth as the lead vocalist of Van Halen.

Van Halen is a heavy metal band formed in Pasadena, California back in 1972. Brothers Eddie and Alex Van Halen originally called the band Mammoth, changing the name to Van Halen in 1974 when they found out there was another Mammoth playing the circuit. Early on, the brothers were renting a sound system from David Lee Roth, and they decided to save some money by bringing him into the band and saving on the rental fee!

The Random House publishing house was founded in 1925 by Donald Klopfer and the marvelous Bennett Cerf of TV’s “What’s My Line”. Apparently, Klopfer and Cerf originally resolved to “publish a few books on the side at random”, and hence came up with the name “Random House”.

When I was growing up in Ireland, we never saw Campbell’s soup on the shelves. It was basically all Knorr products, and dehydrated soup from a packet at that. How times have changed. Knorr is a German brand, now owned by the Anglo-Dutch Company Unilever.

When Kelly Ripa secured the co-host spot on morning television with Regis Philbin, she was still acting in “All My Children” in a role she had been playing for over ten years. After a year of holding down two jobs, she eventually gave up the acting gig. Ripa has acted as spokeswoman for several brands over the years, most recently for Electrolux and Rykä.

“Sill plate” or simply “sill” is an architectural term for a bottom horizontal member to which vertical members are attached. A “window sill” is specific sill plate that is found at the bottom of a window opening.

Aimee Semple McPherson was a pioneer in the arena of evangelism, being one of the first to use radio to get across her message. In 1926, McPherson disappeared under mysterious circumstances at Venice Beach, California. About a month later, Aimee’s mother received a ransom note, which she says that she tossed away thinking that her daughter had drowned. A few days later, McPherson was found wandering around in a Mexican town across the border from Douglas, Arizona, claiming that she had been kidnapped and had escaped. There were many discrepancies in her story though, and five witnesses claimed to have seen her in a seaside cottage in Carmel, California while she was “gone”. No one seems to know for sure what exactly happened during that month.

Allen Ginsberg was a poet from from Newark, New Jersey whose name became inextricably linked with the Beat Generation of the 1950s and the counterculture of the 1960s. His most famous work is the 1955 poem “Howl”, in which Ginsberg denounces capitalism and conformity in the US.

The crime of burglary is the breaking into and entering of a building with the intent to steal. The actual theft is a separate crime.

The music for the Christmas song “Deck the Halls” is a traditional Welsh tune that dates back to the 16th century. The same tune was used by Mozart for a violin and piano duet. The lyrics with which we are familiar (other than the “tra-la-la”) are American in origin, and were recorded in 19th century. “‘Tis the season to be jolly …”

The Hollywood Walk of Fame is a series of sidewalks taking up 15 blocks of Hollywood Boulevard and 3 blocks of Vine Street in Hollywood. The Walk of Fame is an ever-changing monument dedicated to those who have achieved greatness in the entertainment industry, both in front of and behind the camera. The first stars installed in the sidewalk were a group of eight, officially laid in 1960. That group consisted of:

61. Cause trouble … and a hint to this puzzle’s circled letters : STIR THE POT

66. Scarlet letter of fiction : RED A

31. Shake it on the dance floor : BOOGIE