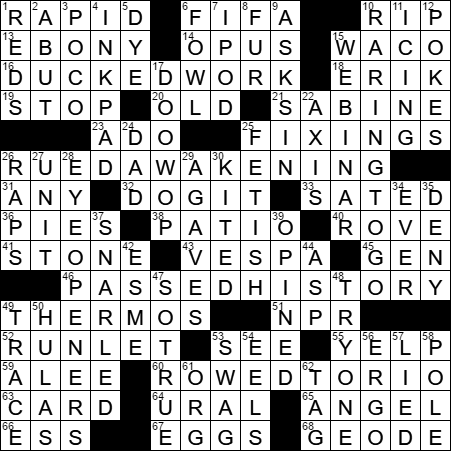 Each of today’s themed answers sounds like a familiar phrase:

The International Federation of Association Football (FIFA, standing for “Fédération Internationale de Football Association”) is the governing body of the game of soccer. FIFA was founded in 1904 in Paris, but the organization’s first permanent headquarters was established in Zurich, in 1932.

“Dis” is a slang term meaning “insult” that originated in the eighties. It is a shortened form of “disrespect” or “dismiss”.

“Ebony and Ivory” is a hit song written by Paul McCartney and recorded by him with Stevie Wonder in 1982. The song uses the image of the ebony and ivory keys on a piano to symbolize racial integration and harmony.

Dr Pepper was introduced in 1885 in Waco, Texas, one year before the competing Coca-Cola was released to the market. I spent an entertaining few hours at the Dr Pepper Museum in Waco a while back.

16. Played hooky from the office? : DUCKED WORK (sounds like “ductwork”)

Apparently the term “playing hooky” comes from “hoekje”, the Dutch name for the game hide-and-seek. To play hooky is to shirk one’s responsibility, as in a schoolkid taking a day off without permission.

Erik Larson is a journalist, most notably contributing features to “The Wall Street Journal” and “TIME” magazine. Larson is also a very successful author of nonfiction books, such as “The Devil in the White City” (about the Chicago World’s Fair of 1893) and “Dead Wake” (about the sinking of the Lusitania).

The punctuation mark used to terminate a sentence is called a “period” in American English, and a “full stop” in British English. The same punctuation mark has no symbol in Morse code, so the word STOP is used instead in telegraphy.

The Sabine River passes through the states of Louisiana and Texas, forming part of the border between the two states for some of its length. There are a lot of cypress trees growing along the river’s banks as it approaches the Gulf of Mexico. These trees give the river its name as “sabinas” is the Spanish for “cypress trees”.

32. Give a halfhearted effort : DOG IT

“To dog it” is a slang term (unknown to me outside of crosswords) meaning to not expend the effort necessary to accomplish a task.

33. Gratified and then some : SATED

Pizza was invented in Naples where it has a long tradition that goes back to Ancient Rome. During an 1889 visit to Naples, Queen Margherita of Savoy was served a special pizza that was created with toppings designed to mimic the colors of the Italian flag. The ingredients of tomato (red), mozzarella (white) and basil (green) can still be found together on menus today, on a pie usually named Pizza Margherita after the queen. I do love basil on my pizza …

Karl Rove is a Republican political consultant, and the man who is usually credited with the successful election campaigns mounted by George W. Bush. As well managing Bush’s 2000 and 2004 presidential campaigns, Rove was also at the helm for Bush’s 1994 and 1998 gubernatorial victories in Texas. Rove is a Christmas baby, born on December 25, 1950.

Vespa is a brand of motor scooter originally made in Italy (and now all over the world) by Piaggio. “Vespa” is Italian for “wasp”.

The term Generation X originated in the UK where it was the name of a book by Jane Deverson. Her book detailed the results of a study of British youths in 1964, contrasting their lifestyle to those of previous generations. It was Canadian author Douglas Coupland who was responsible for popularizing the term, with his more successful publication “Generation X: Tales for an Accelerated Culture”. By the latest accepted definition, Gen-Xers were born between 1961 and 1981.

The vacuum flask was invented in 1892 by Sir James Dewar. It comprises two flasks, one inside the other, joined at the neck. The air between the walls of the two flasks is expelled, creating a near-vacuum. This vacuum minimizes heat transfer, so that liquids in the inner flask remain hot or cold longer. Two German glassblowers commercialized Dewar’s design, starting in 1904, and sold the flasks under the trademarked name “Thermos”. Thermos is still a registered trademark in some countries, but was deemed a genericized trademark in the US in 1963.

Chicago Public Radio produces one of my favorite radio shows, “Wait Wait… Don’t Tell Me!” It is indeed a fun game show, hosted by Peter Sagal. The “Morning Edition” newsreader Carl Kasell used to act as judge and scorekeeper, until he retired in 2014. There should be more game shows of that ilk on the radio, in my humble opinion …

A “runnel” or “runlet” is a small stream or creek.

Even though the 2016 Olympic Games was a “summer” competition, it was held in Rio de Janeiro in the winter. As Rio is in the southern hemisphere, the opening ceremony on 5th August 2016 fell in the local season of winter. The 2016 games was also the first to be held in South America, and the first to be hosted by a Portuguese-speaking country.

“Road to Rio” is the fifth of the “Road” series of films that starred Bing Crosby, Bob Hope and Dorothy Lamour. “Road to Rio” was released in 1947. Crosby and Hope play vaudeville performers who stow away on an ocean liner bound for Rio. Lamour plays someone with a crooked guardian who is a fortune hunter, and who uses hypnosis to control the young woman.

Playing cards, in various forms, have been around for centuries and were probably invented in China. The Joker card is an American invention, appearing first in the late 1860s. The Joker was introduced as a card for the game of Euchre, and the suggestion is that the term “Joker” comes from “Juker” or “Juckerspiel”, the original German name for Euchre.

“Angel” is a TV series that ran for five seasons starting in 1999. It is a spin-off from the very successful “Buffy the Vampire Slayer”, with Angel originally introduced in “Buffy” as a love interest for the title character. Angel was an Irishman who lived in the 1700s who became a sadistic vampire. He was cursed with a human soul, so becomes a “good guy”.

A geode is a rock in which there is a cavity lined or filled with crystal formations.

Johnny Bench is a former Major League Baseball catcher who played for the Cincinnati Reds. Bench is now a spokesman for the Stryker Corporation, makers of medical implants. After a career as a baseball catcher, his natural hip joint was in bad shape and so he had very successful replacement surgery in 2004. Bench isn’t just a spokesman for Stryker, he’s a customer.

Webinar is short for “Web-based seminar”, a presentation, lecture or similar event held online. In a Webinar there is two-way interaction, with the audience able to ask questions of the presenter.

At the beginning of the 19th century, “fetishism” was the worship of “fetishes”. Back then, a fetish was an object that was revered and considered to have mysterious powers. A few decades later, the usage of the term “fetish” was extended, probably by New England Transcendentalists such as Ralph Waldo Emerson and Henry David Thoreau, to describe an object of blind devotion. The concept of sexual fetishism arose at the end of the 19th century.

Amulets are items worn to ward off disease or to protect against harmful magical spells.

Rap star Eminem’s real name is Marshall Mathers, a native of Saint Joseph, Missouri. Mathers grew up poor, raised by a single-mom as the family was abandoned by his father when he was 18 months old. Marshall and his mother moved around the country before settling in a suburb of Detroit. He didn’t do well at school, and dropped out at the age of 17. But in the end he made it pretty big …

Check kiting is illegal. The idea behind kiting is to write a check, even though there are insufficient funds to cover the amount. The con artist then writes another check, also with insufficient funds, from another bank’s account to cover the original check. I am not sure it would work nowadays, but then I am as honest as the day is long! Oh, and I think the term “kiting” comes from the older phrase “go fly a kite”, the idea being that the bad check is floated on air (non-existent funds).

The “hula” is a native dance of Hawaii that uses arm movements to relate a story. The hula can be performed while sitting (a “noho” dance”) or while standing (a “luna” dance).

Electrophorus electricus is the biological name for the electric eel. Despite its name, the electric “eel” isn’t an eel at all, but rather what is called a knifefish, a fish with an elongated body that is related to the catfish. The electric eel has three pairs of organs along its abdomen, each capable of generating an electric discharge. The shock can go as high as 500 volts with 1 ampere of current (that’s 500 watts), and that could perhaps kill a human.

16. Played hooky from the office? : DUCKED WORK (sounds like “ductwork”)

26. Was sorry to have set the alarm? : RUED AWAKENING (sounds like “rude awakening”)

32. Give a halfhearted effort : DOG IT

33. Gratified and then some : SATED

46. Made it through the Civil War? : PASSED HISTORY (sounds like “past history”)

9. Welcomes warmly, as a visitor : ASKS IN