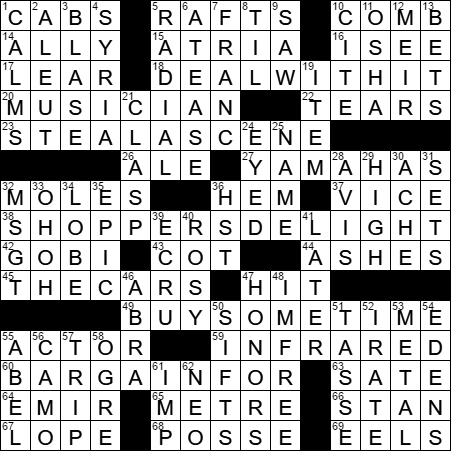 Today’s themed answers each start with something a SHOPPER might find DELIGHTFUL at a big sale event:

Something described as “tonsorial” pertains to a barber or to haircutting. The Latin term “tonsor” translates as “barber, shaver, shearer”.

The use of “jam”, to mean an improvised passage performed by a whole jazz band, dates back to the late twenties. This gave rise to “jam session”, a term used a few years later. The use of “jam” in this context probably stems from the meaning of “jam” as something sweet, something excellent.

27. Some motorcycles and pianos : YAMAHAS

The Japanese company Yamaha started out way back in 1888 as a manufacturer of pianos and reed organs. Even though the company has diversified since then, Yamaha’s logo still reflects it musical roots. Even on Yamaha motorcycles you can see a logo made up of three intersecting tuning forks.

One of the more commonly known facts about my native Ireland is that there are no snakes in the country. A less known fact is that there are no moles either. There are plenty of snakes and moles in Britain, just a few miles away. Over a pint we tend to give the credit to Saint Patrick, but the last ice age is more likely the responsible party …

Stan Musial was a retired baseball player who went by the nickname “Stan the Man”, a moniker he was awarded by the Brooklyn Dodgers fans in 1946. Apparently, off the field Stan was quite the harmonica player.

3. Having a been-there-done-that attitude : BLASE

“Blasé”, meaning “nonchalant, bored from overindulgence” comes from French, in which language it can mean “satiated”.

Since the onset of the Syrian Civil War in 2011, a refugee crisis has developed involving almost 7 million internally displaced persons and almost 5 million displaced persons outside of Syria (as of February 2016). Those are staggering numbers, especially when one compares them to the estimated Syrian population of 17 million in 2014.

The city of Metz is in the northeast of France, close to the German border. Given the proximity to Germany, Metz has both a strong German tradition and a strong French tradition. Metz was handed over to the French following WWI, after nearly 50 years of German rule. It quickly fell back into German hands in 1940 during WWII, with many German officers delighted to have back the city of their birth. Perhaps because of this long association with Germany, the US Army under General Patton encountered stiff resistance when liberating Metz in 1944. The cathedral in Metz is home to the largest expanse of stained glass in the world, almost 70,000 square feet in all.

A master sergeant (MSgt) is a non-commissioned officer (NCO).

Plumbum is the Latin for lead, explaining why the symbol of the element in the Periodic Table is “Pb”. It also explains why the original lead weight on the end of a line used to check vertical was called a “plumb line”. And, as pipes were originally made of lead, it also explains why we would call in a “plumber” if one of them was leaking.

Zinc is the chemical element with the atomic number 30 and the element symbol “Zn”. Zinc is a metal that can form pointed crystals after smelting. It is probably these crystals that gave the element its name, which comes from the Old High German “zint” meaning “point”.

Our term “camouflage” evolved directly from a Parisian slang term “camoufler” meaning “to disguise”. The term was first used in WWI, although the British navy at that time preferred the expression “dazzle-painting” as it applied to the pattern applied to the hulls of ships.

A commando unit is a body of troops specially trained for hit-and-run raids into enemy territory. We imported the term into English from Afrikaans in the early 1800s. We owe the modern usage of “commando” to Winston Churchill, who used it starting in 1940 to describe shock troops whose job it was to disrupt of the planned German invasion of Britain. Churchill was probably familiar with the word from his time as a war correspondent and military officer during the Second Boer War.

27. Some motorcycles and pianos : YAMAHAS

3. Having a been-there-done-that attitude : BLASE