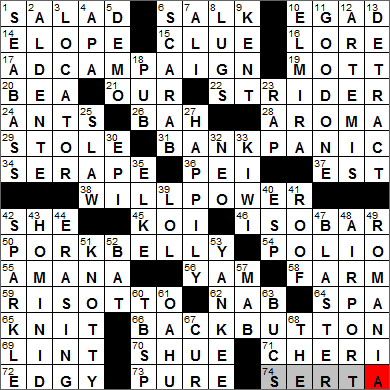 CROSSWORD SETTER: Victor Barocas
THEME: Back Button … each of today’s answers ends with a word that can go in front of BUTTON, i.e. BUTTON can be at the BACK:

Today’s Wiki-est, Amazonian Googlies
Across
6. 54-Across vaccine developer SALK
(54A. See 6-Across POLIO)
Jonas Salk was an American medical researcher, famous for developing the first safe polio vaccine. In the fifties, especially after the 1952 polio epidemic, the biggest health fear in the US was polio because it killed thousands, left even more with disabilities and most of the victims were children. The situation was dire and the authorities immediately quarantined the family of any polio victim, and that quarantine was so strict that in many cases the families were not even permitted to attend the funeral of a family member who died from the disease.

17. Series of “Got milk?” spots, e.g. AD CAMPAIGN (giving “campaign button”)
The “got milk?” advertising campaign was funded originally by the California Milk Processor Board and later by milk processors and dairy farmers. The “got milk?” ads encourage us to drink cow’s milk, and lots of it.

19. Suffragist Lucretia MOTT
Lucretia Coffin Mott (what a name!) was an American Quaker, and an advocate for women’s rights. Mott has been called the first American “feminist”. Her first job was teaching in the Quaker school in which she was educated. There she learned that her salary was to be one third of that paid to the males with the same job (she married one of the male teachers!). That injustice initiated her interest in women’s rights.

20. Emmy-winning Arthur BEA
Actress Bea Arthur’s most famous roles were on television, as the lead in the “All in the Family” spin-off “Maude” and as Dorothy Zbornak in “The Golden Girls”. Arthur also won a Tony for playing Vera Charles on stage in the original cast of “Mame” in 1966, two years after she played Yente the matchmaker in the original cast of “Fiddler on the Roof”.

21. “__ Gang” OUR
Hal Roach made a whole series of comedy shorts with “The Little Rascals”, also known as “Our Gang”. This very likable bunch of kids included Spanky and his kid brother, Porky. Porky had a speech impediment so he couldn’t pronounce “Okay, Spanky” very clearly and it came out as “Otay, Panky”.

22. Tolstoy work subtitled “The Story of a Horse” STRIDER
“Kholstomer” is a story that was started by Leo Tolstoy in 1863, but left unfinished. It was reworked and published in 1886 as “Kholstomer: The Story of a Horse”, and translated into English with the title “Strider”. Tolstoy uses the technique of commenting on the human condition through the eyes of a horse.

24. Queen’s subjects ANTS
The queen ant of some species can live to the ripe old age of 30 years, which is one of the longest lifespans in the insect world.

31. Snowballing financial crisis BANK PANIC (giving “panic button”)
The Federal Reserve System (aka “the Fed”) was introduced in 1913 in response to a number of financial panics at the beginning of the 20th century. The original role of the Fed was to act as a lender of last resort in case there was a run on a bank. This can happen as most of the money that is deposited by customers in a bank is reinvested by that bank, so it has very little liquid cash available. If too many customers look for their money at one time, then the bank can be short of cash and this can start a “run”. The Fed’s responsibilities have broadened since those early days …

34. Mexican cover-up SERAPE
“Serape” is the English pronunciation and spelling of the Spanish word “zarape”. A zarape is like a Mexican poncho, a soft woolen blanket with a hole in the middle for the head. Most serapes have colorful designs that use traditional Mayan motifs.

36. JFK Library architect I.M. PEI
The John F. Kennedy Presidential Library is a splendid structure located right beside the Boston campus of the University of Massachusetts. President Kennedy chose the location for his library just one week before he was assassinated. The library itself was designed by architect I. M. Pei.

45. Garden pond fish KOI
The fish known as koi are also called Japanese carp. Koi have been bred for decorative purposes and there are now some very brightly colored examples found in Japanese water gardens.

46. Weather map line ISOBAR
An isobar is a line on a weather map connecting points of equal barometric pressure.

55. Whirlpool subsidiary AMANA
The Amana Corporation takes its name from the location of its original headquarters, in Middle Amana, Iowa.

56. Sweet tuber YAM
Although in the US we sometimes refer to sweet potatoes as “yams”, the yam is actually a completely different family of plants. True yams are more common in other parts of the the world than they are in this country, and are especially found in Africa.

58. MacDonald’s home FARM
There was an American version of the English children’s song “Old MacDonald Had a Farm” (E-I-E-I-O), that was around in the days of WWI. The first line of the US version goes “Old MacDougal had a farm, in Ohio-i-o”.

59. Ristorante dish RISOTTO
Risotto is an Italian rice dish that is usually served as a first course in Italy, but as a main course here in North America.

69. Clothing fluff LINT
“Lint”, meaning “fluff”, is one of those terms that I had to learn when I moved to the US. We call the same thing “fuzz” on the other side of the Atlantic.

70. Actress Elisabeth SHUE
Elisabeth Shue has always been a favorite actress of mine. She has been in several popular films including “The Karate Kid”, “Cocktail”, two of the “Back to the Future” movies, “Leaving Las Vegas”, and my personal favorite “Adventures in Babysitting”. Shue now has a recurring role on the TV crime drama “CSI: Crime Scene Investigation”.

74. Company with “counting sheep” ads SERTA
Serta was founded in 1931 when a group of 13 mattress manufacturers came together, essentially forming a cooperative. Today, the company is owned by eight independent licensees in a similar arrangement.

Down
2. Ristorante request AL DENTE
The Italian expression “al dente” literally means “to the tooth” or “to the bite” and is used to describe not only pasta, but also vegetables that are cooked so that they are tender yet still crisp.

The use of the term “shrink” to describe a psychiatrist is first attested in 1966. “Shrink” is diminutive of “headshrinker”.

6. Sacred beetle SCARAB
Scarabs were amulets in ancient Egypt. They were modelled on the dung beetle, as it was viewed as a symbol of the cycle of life.

8. Galoots LUGS
“Galoot” is an insulting term meaning an awkward or boorish man, an ape. “Galoot” comes from the nautical world, where it was originally what a sailor might call a soldier or marine.

10. New York city near the Pennsylvania border ELMIRA
Elmira is a city in the southern tier of New York State located closed close to the border with Pennsylvania. Elmira was also the family home of Olivia Langdon, wife of Samuel Clemens (aka Mark Twain). Mark Twain and family are buried in Elmira’s Woodlawn Cemetery.

12. Sister of Apollo ARTEMIS
In Greek mythology, Zeus and Leto are the father and mother of the twins Apollo and Artemis. The twins are sometimes referred to as the Letoides, after their mother.

25. Fries alternative SLAW
The term “coleslaw” is an Anglicized version of the Dutch name “koolsla”, which in itself is a shortened form of “Koolsalade” meaning “cabbage salad”.

27. Antepenultimate fairy tale word HAPPILY
And they all lived happily ever after …

30. Prefix with center EPI-
The “epicenter” is that point on the surface of the earth which is directly above the focus of an earthquake.

32. Not paleo- NEO-
The prefix “paleo-” means “prehistoric, primitive”. It comes from the Greek word “palaios” which means “old, ancient”.

33. New Zealander KIWI
Unlike many nicknames for people of a particular country, the name “Kiwi” for a New Zealander isn’t offensive at all. The term comes from the flightless bird called the kiwi, which is endemic to New Zealand and is the country’s national symbol. “Kiwi” is a Maori word, and the plural (when referring to the bird) is simply “kiwi”. However, when you have two or more New Zealanders with you, they are Kiwis (note the “s”, and indeed the capital “K”!).

35. Actress Sommer ELKE
Elke Sommer is a German-born actress who was at the height of her success on the silver screen in the sixties. Sommer won a Golden Globe as Most Promising Newcomer Actress for her role opposite Paul Newman in 1964’s “The Prize”. She also sings and has released several albums. Now Sommer focuses on painting, producing artwork that is strongly influenced by the work of Marc Chagall.

43. Neanderthal, for one HOMINID
The hominids are the great apes, and belong to the family of primates called Hominidae. Extant genera that make up the family Hominidae are:

The Homo genus includes, of course, the species Homo sapiens (modern humans), but we’re the only species left in that genus. The last known species related to humans was Homo neanderthalensis (Neanderthal Man) which died off about 24,000 years ago. However, another species was discovered in Indonesia in 2003 that has been dubbed Homo floresiensis (Flores Man … sometimes called “hobbit”), and it may possibly have lived as recently as 12,000 years ago. Watch this space …

47. Weapon for Han Solo BLASTER
Han Solo is the space smuggler in “Star Wars” played by Harrison Ford. Ford was originally hired by George Lucas just to read lines for actors during auditions for “Star Wars”, but over time Lucas became convinced that Ford was right for the pivotal role of Han Solo.

49. Bucharest’s country ROMANIA
The city of Bucharest has been the capital of Romania since 1862. A native of the city is known as a “Bucharester”.

53. Mariano Rivera, e.g. YANKEE
Mariano Rivera is a professional baseball pitcher from Panama City. Rivera played for the New York Yankees from 1995 until his retirement at the end of the 2013 season.

57. Fairy queen of English legend MAB
In Shakespeare’s “Romeo and Juliet”, Mercutio refers to the fairy known as Queen Mab. It seems that Queen Mab was Shakespeare’s creation, although she became popular in subsequent works of literature. For example, she is referred to in Herman Melville’s “Moby Dick”, in Jane Austen’s “Sense and Sensibility”, and Percy Bysshe Shelley wrote a large poetic work called “Queen Mab: A Philosophical Poem”.

61. Site of the Ko’olau range OAHU
O’ahu has been called “The Gathering Place”, although the word “O’ahu” has no translation in Hawaiian. It seems that O’ahu is simply the name of the island. One story is that it is named after the son of the Polynesian navigator that first found the islands. The island is made up of two volcanoes, Wai’anae and Ko’olau, joined together by a broad valley, the O’ahu Plain.

63. Tampa NFLers BUCS
The Tampa Bay Buccaneers joined the NFL in 1976 along with the Seattle Seahawks as expansion teams. The Bucs had a tough start in the NFL, losing their first 26 games. Things went better in the early eighties, but then the team went through 14 consecutive losing seasons. Their luck changed again though, and they won the Super Bowl at the end of the 2002 season.