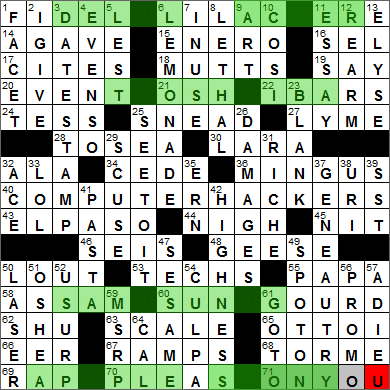 CROSSWORD SETTER: Steve Blais
THEME: Computer Hackers … four rows of the grid have the names of COMPUTERS hidden therein, with each computer name HACKED into pieces by some black squares:

40A. Web concerns … and based on six familiar names hidden in rows 1, 4, 12 and 15 of this puzzle grid, what the black squares in those rows symbolize COMPUTER HACKERS

Today’s Wiki-est, Amazonian Googlies
Across
1. Brother of Raúl and Juanita FIDEL
Raúl Castro is the younger brother of Fidel Castro. Raúl has been President of Cuba since 2008, when Fidel stepped aside.

Juanita Castro is a sister of Fidel and Raúl Castro, the former and current Cuban Presidents. Juanita collaborated with the CIA in the late fifties and early sixties, and in 1964 defected from Cuba. She was a very outspoken critic of her brothers Fidel and Raúl when she first left the island. Juanita soon settled in Miami where she ran her own pharmacy until relatively recently.

14. Tequila source AGAVE
Tequila is a spirit made from the blue agave. The drink takes its name from the city of Tequila, located about 40 miles northwest of Guadalajara.

15. Month in Madrid ENERO
In Spanish, a year (año) starts in January (enero) and ends in December (diciembre).

Madrid is the largest city in Spain and the capital. Madrid is located very close to the geographical center of the country. It is the third-largest city in the European Union (after London and Paris).

16. Sprinkling on French fries? SEL
In French, one might season one’s food with salt (sel) and pepper (poivre).

21. Kyrgyzstan city OSH
Osh is the second largest city in the former Soviet Republic of Kyrgyzstan (after the capital Bishkek). Osh was a center of silk production and lies along the old Silk Road, the trade route that traversed Asia.

24. Julia’s “Ocean’s Twelve” role TESS
“Ocean’s 11” is a great film from 1960, starring Frank Sinatra as Danny Ocean. The original storyline is updated for the excellent 2001 remake, with George Clooney playing the lead. In the 1960 movie, the love interest is a character called Beatrice Ocean, played by Angie Dickinson. In the 2001 version, the love interest gets a new name, Tess Ocean, and is played by Julia Roberts.

25. Legend of the links SNEAD
Sam Snead was probably the most successful golfer never to win a US Open title, as he won a record 82 PGA Tour events. Snead did win seven majors, but never the US Open. He was also quite the showman. He once hit the scoreboard at Wrigley Field stadium with a golf ball by teeing off from home plate.

27. Old __, Connecticut LYME
Old Lyme is a town in Connecticut that is named for the English town of Lyme Regis. The towns of Old Lyme and its neighbor Lyme gave their name to Lyme disease, as a number of cases of the disease were identified there in 1975.

32. Words in a dish A LA
The term “in the style of” can be translated in “alla” in Italian and “à la” in French, terms that are often seen on a menu.

36. Jazz double bassist Charlie MINGUS
Charles Mingus was a jazz composer, bandleader and double bass player from Nogales, Arizona. Mingus was as famous for his musical talent as he was for his fiery temper, a temper that would often lead to violent outbursts while onstage. This led to him being dubbed “the Angry Man of Jazz”.

43. West Texas city EL PASO
The Mexican city sitting across the border from El Paso is more correctly called Ciudad Juarez. Juarez used to be called El Paso del Norte (the North Pass). It was to be the younger settlement on the northern side of the Rio Grande which would retain the “El Paso” name.

53. Some Staples employees TECHS
Staples is an office supply chain store based in Framingham, Massachusetts. Some of the company’s stores have a Staples EasyTech department which provides computer repair and upgrade services.

55. Bear whose bed was too hard PAPA
The story of “Goldilocks and the Three Bears” was first recorded in 1837, in England, although the narrative was around before it was actually written down. The original fairy tale was rather gruesome, but successive versions became more family-oriented. The character that eventually became Goldilocks was originally an elderly woman, and the three “nameless” bears became Papa Bear, Mama Bear and Baby Bear.

58. Source of much Indian tea ASSAM
Assam is a state in the very northeast of India, just south of the Himalayas. Assam is noted for its tea as well as its silk.

61. Pumpkin, e.g. GOURD
A gourd is a plant in the same family as the cucumber. The hollow, dried out shell of the fruit is large and rounded, and used for a number of purposes. Gourds make fine bottles and bowls, and resonating chambers as part of musical instruments … and drums.

62. Moo __ pork SHU
Moo shu pork is a traditional dish from northern China, with the main ingredients being shredded pork and scrambled egg.

68. “It Wasn’t All Velvet” memoirist TORME
Mel Tormé was a jazz singer, with a quality of voice that earned him the nickname “The Velvet Fog”. Tormé also wrote a few books, and did a lot of acting. He was the co-author of the Christmas classic known as “The Christmas Song”, which starts out with the line “Chestnuts roasting on an open fire …”

69. Diddy ditty RAP
When Sean John Combs started his rapping career, he used the stage name Puff Daddy. Then he went with P. Diddy, and is now recording simply as Diddy. Having said that, he has to stick with P. Diddy in some countries as he lost a legal battle over use of the simpler “Diddy” name as there is another artist called Richard “Diddy” Dearlove. There’s now talk of Mr. Combs going with the name “Ciroc Obama”.

70. Arraignment answers PLEAS
In the law, to arraign someone is to call a person before a court to answer charges that have been brought.

Down
10. Mozart’s “__ fan tutte” COSI
Mozart’s comic opera “Così fan tutte” is also known in English as “The School for Lovers”. The literal translation of the opera’s title is “Thus do all (women)”, or “Women are like that”.

11. David Sedaris work ESSAY
David Sedaris is a humorist and author from Binghamton, New York who grew up in Raleigh, North Carolina. He is one of my wife’s favorite authors so I brought her to hear him give some readings in San Jose a few years back. He was very, very entertaining. David’s sister is actress and comedienne Amy Sedaris who plays the lead in the Comedy Central series “Strangers with Candy”.

“Family Ties” was one of the first TV shows that I enjoyed when I arrived in the US back in 1983. I found the situation very appealing, with two ex-hippie parents facing off against an ultra-conservative son. The main characters in the show were Michael J. Fox as Alex, Justine Bateman as Alex’s sister Mallory, Meredith Baxter-Birney as Alex’s mom Elyse, and Michael Gross as Alex’s dad Steven. But some future stars had recurring roles as well, including Courteney Cox as one of Alex’s girlfriends and Tom Hanks as Elyse’s younger brother.

31. Loaded, in Limoges RICHE
Limoges is a city in west-central France that is the capital of the Limousin region.

35. Predatory bird ERN
The ern (also erne) is also called the white-tailed eagle, and the sea-eagle.

37. Singer and longtime owner of baseball’s Angels GENE AUTRY
Gene Autry was a so-called singing cowboy who had an incredibly successful career on radio, television and in films starting in the thirties. Autry’s signature song was “Back in the Saddle Again”, and his biggest hit was “Rudolph the Red-Nosed Reindeer”. He also had a hit with his own Christmas song called “Here Comes Santa Claus”. There’s even a town in Oklahoma called Gene Autry, named in his honor. Famously, Autry owned the Los Angeles Angels (now the Anaheim Angels) for many years, from 1961 to 1997.

38. Sch. 30 miles south of Providence URI
The University of Rhode Island (URI) was first chartered as an agricultural school, back in 1888. URI’s main campus today is located in the village of Kingston.

47. Bagel choice SESAME
The bagel was invented in the Polish city of Kraków in the 16th century. Bagels were brought to this country by Jewish immigrants from Poland who mainly established homes in and around New York City.

50. __ tag LASER
The name “Laser Tag” is really a misnomer as lasers are rarely used in the game. The “guns” actually send out infrared light, and not laser light, which is picked up by infrared detectors worn by the players.

51. “Ulysses” actor Milo O’SHEA
Milo O’Shea was a great Irish character actor from Dublin who has appeared in everything from “Romeo and Juliet” to “The West Wing”. Sadly, O’Shea passed away in 2013 in New York City.

“Ulysses” is a 1967 movie based on the famous James Joyce novel of the same name. Milo O’Shea played the lead role of Leopold Bloom. The dialogue in the film is lifted almost word for word from the novel, which is probably why “Ulysses” is probably the first film to use the “f***” word.

54. Apology ending CULPA
Roman Catholics are very familiar with the Latin phrase “mea culpa” meaning “my fault”, as it is used in the Latin Mass. The additional term “mea maxima culpa” translates as “my most grievous fault”.

64. Western st. CAL
The name “California” is derived from a fictional warrior queen called Calafia who lived on the mythical Island of California. Queen Calafia was the creation of Spanish writer Garci Rodríguez de Montalvo in a 1510 novel. The Spanish originally gave the name “California” to a region that covered today’s Baja California peninsula in Mexico, the US states of California, Nevada and Utah, as well as parts of Arizona, New Mexico and Wyoming.