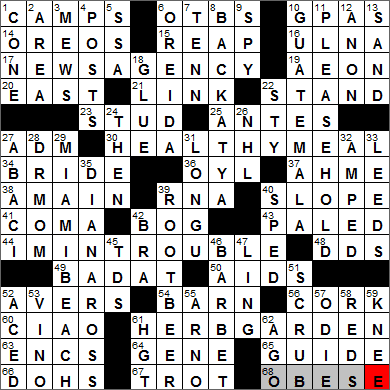 61A. Aromatic plot, and where to find three different plants hidden in 17-, 30- and 44-Across HERB GARDEN

Today’s Wiki-est, Amazonian Googlies
Across
6. NYC gambling outlets closed in 2010 OTBS
Off-Track Betting (OTB) is the legal gambling that takes place on horse races outside of a race track. A betting parlor can be referred to as an OTB.

14. Cookies in some pie crusts OREOS
How the Oreo cookie came to get its name seems to have been lost in the mists of time. One theory is that it comes from the French “or” meaning “gold”, a reference to the gold color of the original packing. Another suggestion is that the name is the Greek word “oreo” meaning “beautiful, nice, well-done”.

16. Latin for “elbow” ULNA
The humerus is the long bone in the upper arm. The bones in the forearm are the radius and ulna. “Ulna” is the Latin word for “elbow”, and “radius” is Latin for “ray”.

17. Reuters or Bloomberg NEWS AGENCY (hiding “sage”)
The Reuters news agency was formed way back in 1851 by German-born, British entrepreneur Paul Julius Reuter. Reuter had checked the feasibility of a news service for a couple of years prior to launching the agency, and the technologies he used for his study were the telegraph and carrier pigeons …

Bloomberg is the New York City financial services and media company that was founded by New York Mayor Michael Bloomberg in 1981.

19. Geological age AEON
Geological time is divided into a number of units of varying lengths. These are, starting from the largest:

21. Sausage unit LINK
Link sausages are so called as they can come in chains, with each sausage being a link in that chain.

23. Macho man STUD
The word “stud”, meaning “a male horse kept for breeding”, is derived from the Old English word “stod” which described a whole herd of horses.

30. Nutritionist’s recommendation HEALTHY MEAL (hiding “thyme”)
In Ancient Greece, the herb thyme was burned as incense and used in baths, as it was believed to be a source of courage.

36. Popeye’s Olive OYL
Popeye first appeared in 1929 in a comic strip called “Thimble Theatre”. The strip, created by E. C. Segar, ran for ten years before Popeye made an appearance. Popeye received such a great welcome from readers that he soon “took over” the strip, and eventually even hogged the strip’s title. Before Popeye turned up Olive Oyl was the main character.

38. At full speed AMAIN
“Amain” is an old term meaning “at great speed” or “of great strength”.

42. Cranberry source BOG
When early European settlers came across red berries growing in the bogs of the northern part of America, they felt that the plant’s flower and stem resembled the head and bill of a crane. As such, they called the plant “craneberry”, which later evolved into “cranberry”.

56. County of the Blarney Stone CORK
Blarney is a town in County Cork in the south of Ireland. Blarney is home to Blarney Castle, and inside the castle is the legendary Blarney Stone. “Kissing the Blarney Stone” is a ritual engaged in by oh so many tourists (indeed, I’ve done it myself!), but it’s not a simple process. The stone is embedded in the wall of the castle, and in order to kiss it you have to sit on the edge of the parapet and lean way backwards so that your head is some two feet below your body. There is a staff member there to help you and make sure you don’t fall. The Blarney Stone has been labelled as the world’s most unhygienic tourist attraction! But once you’ve kissed it, supposedly you are endowed with the “gift of the gab”, the ability to talk eloquently and perhaps deceptively without offending. Sure, I wouldn’t know …

60. Parting word with an air kiss, perhaps CIAO
“Ciao” is the Italian for “‘bye”. “Arrivederci” is more formal, and translates better as “goodbye”.

63. SASEs, e.g. ENCS
A self-addressed stamped envelope (SASE) might be an enclosure (enc.) sent with a letter.

64. Dancer Kelly GENE
The actor and dancer Gene Kelly was from Pittsburgh. Kelly’s best-known performances were in the films “An American in Paris” (1951) and “Singin’ in the Rain” (1952). “Singin’ in the Rain” was co-directed by Kelly and the great Stanley Donen. A few years later, in 1960, Kelly married Jeanne Coyne, Donen’s ex-wife.

66. Homer Simpson outbursts D’OHS
“The Simpsons” is one of the most successful programs produced by the Fox Broadcasting Company. Homer Simpson’s catchphrase is “D’oh!”, which is such a famous exclamation that it has been included in the Oxford English Dictionary (OED) since 2001.

Down
4. Updates a wiki page, say POSTS
A wiki is a website in which users are allowed to create and edit content themselves. The term “wiki” comes from the name of the first such site, introduced in 1994 and called WikiWikiWeb. “Wiki” is a Hawaiian word for “quick”, and is used because comprehensive content is created very quickly a there are so many collaborators contributing to the site.

A Social Security number (SSN) is divided into three parts i.e AAA-GG-SSSS, Originally, the Area Number (AAA) was the code for the office that issued the card. Since 1973, the Area Number reflects the ZIP code from which the application was made. The GG in the SSN is the Group Number, and the SSSS in the number is the Serial Number. However, this is all moot, as since 2011 SSn’s are assigned randomly.

6. Zesty Twirls maker ORE-IDA
Ore-Ida frozen foods are all made with potatoes. The company is located in Oregon, just across the border from Idaho. “Ore-Ida” is a melding of the two state names.

7. Graceland’s st. TENN
Elvis Presley was born in Tupelo, Mississippi and moved to Memphis, Tennessee with his family when he was 13-years-old. Once he had achieved fame, Elvis purchased Graceland, the famous Memphis home that he used for himself and his family. I visited Graceland some years ago, and thoroughly enjoyed the experience.

12. In a bit, old-style ANON
“Anon” originally meant “at once” and evolved into today’s meaning of “soon” apparently just because the word was misused over time.

26. Stanley Cup org. NHL
The Stanley Cup is named for Lord Stanley of Preston, the Governor General of Canada from 1888 to 1893. Lord Stanley’s sons became avid fans of ice hockey while in Canada, and so he donated the trophy in 1909, originally as a challenge cup for the country’s best amateur club.

27. Chinese counters ABACI
The abacus was used as a counting frame long before man had invented a numbering system. It is a remarkable invention, particularly when one notes that abaci are still widely used today across Africa and Asia.

32. Like electric guitars AMPED
An electric guitar, for example, needs an amplifier (amp) to take the weak signal created by the vibration of the strings and turn it into a signal powerful enough for a loudspeaker.

33. West Yorkshire’s largest city LEEDS
I went to school for a while not far from Leeds in West Yorkshire in the north of England. Prior to the Industrial Revolution, Leeds was a major center for the production and trading of wool, and then with the onset of mechanization it became a natural hub for manufacture of textiles. These days Leeds is noted as a shopping destination and so has been dubbed “the Knightsbridge of the North”.

35. Dorothy portrayer in the film “The Wiz” DIANA ROSS
Diana Ross is one of the most prolific recording artists in history. She sang with the Supremes from 1959 to 1970 and then launched an incredibly successful solo career. Ross was listed in the 1993 edition of “The Guinness Book of World Records” as the most successful music artist ever, with eighteen #1 records.

39. Sassafras soda ROOT BEER
Root beer is a beverage that is very “North American”, as it is rarely found elsewhere in the world. Root beer originated in the 1700s and was made from the root of the sassafras plant. The traditional root beer was a beverage with a very low alcohol content, and of course today there are many versions that contain no alcohol at all. The sassafras root was used as the primary flavor ingredient right up until 1960, when the FDA banned its use as tests determined that it was a carcinogen.

46. Wager over darts, e.g. BAR BET
Darts is a wonderful game often played in British and Irish pubs, even over here in America. The scoring in a traditional game of darts is difficult to describe in a sentence or two, but the game of darts called “Round the Clock” is simply hitting the numbers 1 through 20 in sequence.

47. Former “The View” co-host Lisa LING
Lisa Ling is a journalist, best known as a former co-host of the television show “The View”. Ling now has her own show called “Our America with Lisa Ling”, which airs on the Oprah Winfrey Network. Lisa’s younger sister is Laura Ling. Laura is one of the pair of journalists who were sentenced to 12 years hard labor in prison for illegal entry to North Korea, but who were released in 2009 after a visit from former President Bill Clinton.

53. Ristorante glassful VINO
In Italian, one might order a glass of wine (vino) in a restaurant (ristorante).

55. River of Pisa ARNO
The Arno is the principal river in the Tuscany region of Italy, passing through the cities of Florence and Pisa. Famously the Arno flooded in 1966, the worst flood in the region for centuries. There were numerous deaths and extensive destruction of priceless art treasures, particularly in Florence.

57. Comics dog ODIE
Odie is Garfield’s best friend and is a slobbery beagle, a character in Jim Davis’s comic strip.

“Oh! Susanna” is a song that was published in 1848, written by Stephen Foster. The song is often called “Banjo on My Knee”, an understandable slip given the words of the chorus. “Oh! Susanna” came to be associated with the Forty-Niners, the miners who travelled to California in the 1849 Gold Rush. The lyrics were changed to suit the Gold rush theme with “Alabama” being replaced by “California”, and “banjo” being replaced by “washpan”.