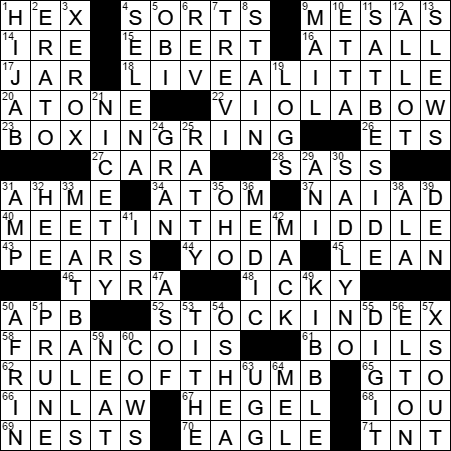 Today’s themed answers each with the name of a finger, in fact five DIGITS in all, and in order as we go from the top of the grid to the bottom:

The film review TV show “At the Movies” has been around since 1988 in various forms with various hosts, most famously Gene Siskel and Robert Ebert. Siskel and Ebert used the iconic “thumbs up and thumbs down” rating system from the very first show.

In Italian, “cara” (darling) is word of “passione” (passion).

The Naiads of Greek mythology were water nymphs, associated with fountains, wells, springs and streams. The saltwater equivalents of the freshwater Naiads were the Oceanids.

Tyra Banks is a tremendously successful model and businesswoman. Banks created and hosts the hit show “America’s Next Top Model “, and also has her own talk show. She was also the first African American woman to make the cover of the “Sports Illustrated” swimsuit issue.

The exact origin of the phrase “rule of thumb” appears to be unclear. However, the expression does exist in languages other than English, although the wording can vary. In Finnish and German the equivalent is “rule of fist”, and in Hebrew the phrase is “rule of finger”.

By definition, a “muscle car” is a small vehicle with a large or maybe oversized engine.

Georg Wilhelm Friedrich Hegel was a German philosopher, one of the founders of the German idealism movement. “Idealism”, in the context of the movement, was the principle that objects did not have properties in themselves, but rather that an object’s properties depended on the person perceiving the object.

The Philadelphia Eagles were established in 1933 and joined the National Football League as a replacement for the bankrupt Frankford Yellow Jackets, also from Philadelphia. The “Eagle” name was inspired by the Blue Eagle insignia that was used by companies who were in compliance with the National Industrial Recovery Act that was central to President Roosevelt’s New Deal Program.

ColorQube is a line of printers produced by Xerox. They’re color printers and are roughly cubic in shape, hence the name, I guess …

4. One-named singer portrayed by Jennifer Lopez in a 1997 film : SELENA

Singer Selena Quintanilla-Perez, known professionally simply as “Selena”, was murdered in 1995 by the president of her own fan club at the height of her career. In a 1997 biopic about Selena’s life, Jennifer Lopez played the title role.

The sash worn as part of traditional Japanese dress is known as an obi. The obi can be tied in what is called a butterfly knot.

The engine known as a V8 is configured with two rows of four cylinders mounted on a crankcase. The rows of cylinders are offset from each other around the crankshaft at right angles, or perhaps a little less. This arrangement of eight cylinders in a V-shape gives rise to the name “V8”.

The Florida Panhandle is in the Central Time Zone, whereas the rest of the state is in the Eastern Time Zone.

The land that is now Israel was ruled by the British after WWI as the British Mandate of Palestine. The British evacuated the area after WWII, largely responding to pressure from both Jewish and Arab nationalist movements. The British Mandate expired on 14 May 1948 and the State of israel was established at the same time. This declaration of a new state was followed by the immediate invasion of the area by four Arab countries and the start of the 1948 Arab-Israeli War. A ceasefire was declared after a year of fighting, and tension has persisted in the region ever since.

Mack Trucks was founded by John Mack in the early 1900s, after he had spent some years working in companies that made carriages and electric motor cars. Along with his two brothers, Mack started their company to focus on building heavy-duty trucks and engines.

Afrin is a nasal spray made by Bayer that has oxymetazoline as an active ingredient. Oxymetazoline is a topical decongestant.

Traditionally, a “tithe” is a payment of one tenth of a person’s annual income and is usually given to a church. Tithing is a practice taught in many traditions, and according to a 2002 survey, about 3% of American adults donate 10% or more of their income to a church.

“Barbarella” is a cult classic 1968 film that was directed by Roger Vadim. Vadim’s wife at the time was Jane Fonda, and she plays the title character.

Elton John’s real name is Reginald Dwight. Sir Elton was knighted in 1998, not for his music per se, but for his charitable work. He founded his own Elton John AIDS Foundation back in 1992.

Uggs are sheepskin boots that originated in Australia and New Zealand. The original Uggs have sheepskin fleece on the inside for comfort and insulation, with a tanned leather surface on the outside for durability. Ugg is a generic term Down Under, although it’s a brand name here in the US.

Mel Blanc was known as “The Man of a Thousand Voices”. We’ve all heard Mel Blanc at one time or another, I am sure. His was the voice behind such cartoon characters as Bugs Bunny, Daffy Duck, Porky Pig, Tweety Bird, Woody Woodpecker, Elmer Fudd and Barney Rubble. And the words on Blanc’s tombstone are … “That’s All Folks”.

4. One-named singer portrayed by Jennifer Lopez in a 1997 film : SELENA

11. Plopped down next to : SAT BESIDE