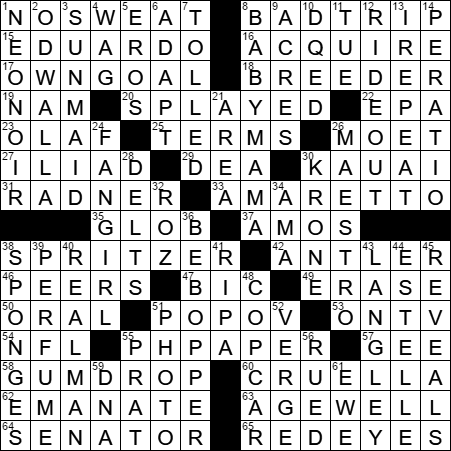 That would be a bad trip resulting from taking drugs.

Eduardo Saverin was one of the founders of Facebook, and someone who worked alongside Mark Zuckerberg while the pair were studying at Harvard. As was emphasized in the 2010 film “The Social Network”, Zuckerberg treated Saverin pretty badly, diluting his partner’s holding in the company. Facebook settled a resulting lawsuit with Saverin, so he still did okay financially, but lost out on the really big bucks. Savarin is from São Paulo, Brazil and became a US citizen in 1998. After his controversial exit from Facebook, Savarin moved to Singapore. He renounced his US citizenship in 2011, in a move viewed by many as a tactic designed to avoid payment of an estimated $700 million in capital gains taxes.

By some definitions, the official involvement of Americans in the Vietnam War started in 1955. At that time, President Eisenhower deployed a Military Assistance Advisory Group to assist in the training of the South Vietnamese Army. American involvement in the conflict officially ended in 1973 with the signing of an agreement that came out of the Paris Peace Accords.

Count Olaf is the main antagonist in “A Series of Unfortunate Events”, the collection of children’s novels penned by Lemony Snicket (the pen name of Diane Handler).

In Greek mythology, Paris was a son of Priam and Hecuba, the king and queen of Troy. Paris is famous for eloping with Helen, Queen of Sparta, and hence precipitating the Trojan War. Paris also killed the Greek hero Achilles by shooting him in the heel with an arrow.

Gilda Radner was a comedian and actress, and one of the original cast members of the hit television show “Saturday Night Live”. Radner left her first husband to marry comedic actor Gene Wilder, whom she met while they were both filming the Sidney Poitier movie “Hanky Panky”.

37. Wally who played himself in the “Taxi” episode “Latka’s Cookies” : AMOS

Wally Amos was a talent agent, one who was in the habit of taking home-baked cookies with him as an enticement to get celebrities to see him. He was urged by friends to open a cookie store (the cookies were that delicious, I guess) and this he did in Los Angeles in 1975 using the name “Famous Amos”. The store was a smash hit and he was able build on the success by introducing his cookies into supermarkets. The brand was eventually bought up making Wally a rich man, and Famous Amos cookies are still flying off the shelf. Wally Amos also became an energetic literacy advocate. He hosted 30 TV programs in 1987 entitled “Learn to Read” that provided reading instruction targeted at adults.

Latka Gravas is one of the most popular characters in the TV sitcom “Taxi” that aired in the late seventies and early eighties. Latka was played by the controversial comic actor Andy Kaufman. The producers of “Taxi” had the character written around a persona that Kaufman was using in his stand-up routines called “Foreign Man”.

Wite-Out is a brand of correction fluid made by BIC.

Popov vodka is is produced in America by the British company Diageo. Popov fills a niche in the low end of the vodka market. This American alcoholic drink is sometimes given the tongue-in-cheek nickname “Russia’s Finest”.

1. “The Girl with the Dragon Tattoo” genre : NEO-NOIR

A neo-noir film is a contemporary film that incorporates elements of the film noir style of the forties and fifties.

“The Girl with the Dragon Tattoo” is a 2011 film based on the hit novel of the same name by Stieg Larsson. Rooney Mara plays the title character, a computer hacker named Lisbeth Salander. Daniel Craig also stars, playing journalist Mikael Blomkvist. The 2011 movie wasn’t the first big screen adaptation of the novel. A Swedish film with the same name was released in 2009.

Odwalla is a company in Half Moon Bay (just south of San Francisco) that sells fruit juices, smoothies and energy bars.

The Sun-Maid brand of raisins belongs to a cooperative of raisin growers in California. The cooperative was founded in 1912, and the famous Sun-Maid girl shown on each container of raisins was actually a seeder and packer called Lorraine Collett who worked for one of the members of the cooperative.

In the myth of Cupid (aka Eros) and Psyche, the two title characters must overcome many obstacles to fulfill their love for each other. Overcome them they do, and the pair marry and enjoy immortal love.

“Baby Mama” is a 2008 film starring Tina Fey as successful single businesswoman who hires a surrogate mother (played by Amy Poehler). “Baby mama” is a term used these days as an alternative to “single mother”.

The name “Tuesday” comes from an Old English word that translates as “Tiw’s Day”. In turn, “Tiw” was the Old English name for the Norse god “Týr”. Týr was the Norse god of single combat, victory and heroic glory.

The P/E (price-to-earnings) ratio of a stock is the stock’s price compared to the earnings of the company per share (EPS). The idea behind the P/E ratio is that a stock with a relatively low P/E is usually a good buy, an indicator that the stock price should rise on the strength of solid earnings.

Fanboys (and fangirls) are fans, but fans of a very specific subject in a particular field. So, someone might be a fan of home computing, but an Intel fanboy would have an enthusiasm for CPUs made by Intel. A fanzine (also “zine”) is a fan publication with a very limited circulation, dealing with a very specific subject matter. Fanzines are usually desktop published and distributed electronically or as photocopies.

The deltoid “muscle” is actually a group of muscles, the ones that cover the shoulder and create the roundness under the skin. The deltoids are triangular in shape resembling the Greek letter delta, hence the name.

Greenland is the largest island on the planet. Geographically, Greenland is part of the continent of North America, but culturally and politically is considered part of Europe. The island became a Danish colony in 1815, and joined the European Economic Community (EEC) with Denmark. Greenland withdrew from the EEC after a referendum in 1983. Since 2009, Greenland has been relatively autonomous, with the Danish government retaining control of foreign affairs, defence and the judicial system.

“Shoe” is a comic strip drawn by Jeff MacNelly from 1977 until he passed away in 2000. The strip features a group of birds, all of whom work as newspapermen.

Bruce Feirstein wrote the bestseller “Real Men Don’t Eat Quiche”, published in 1982. The book’s main theme is the situation in which middle-class men found themselves in the eighties, after feminist attacks on traditional male roles in the seventies.

When Kelly Ripa secured the co-host spot on morning television with Regis Philbin, she was still acting in “All My Children” in a role she had been playing for over ten years. After a year of holding down two jobs, she eventually gave up the acting gig. Ripa has acted as spokeswoman for several brands over the years, most recently for Electrolux and Rykä.

The CIA headquarters is located in Langley, Virginia in a complex called the George Bush Center for Intelligence, named for former Director of the CIA and US President George H. W. Bush.

Estelle is a singer-songwriter from London who hit the top of the charts with her song “American Boy” that featured Kanye West.

“Prat” is a relatively new word for me, a slang term for the buttocks apparently. A “prat-fall” is when someone falls and lands on the buttocks.

A rebus is a puzzle that uses pictures to represent letters and groups of letters. For example, a picture of a “ewe” might represent the letter “U” or the pronoun “you”.

37. Wally who played himself in the “Taxi” episode “Latka’s Cookies” : AMOS

1. “The Girl with the Dragon Tattoo” genre : NEO-NOIR