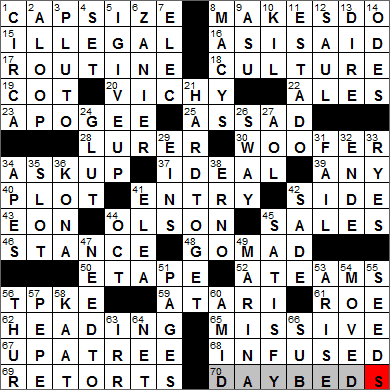 CROSSWORD SETTER: John Lampkin
THEME: Sub Ahead … today’s themed answers are words that take the prefix “sub-”, and that need the word “sub” ahead of them for the clue to make sense:

17A. *Dive, surface, dive, surface, etc.? ROUTINE (SUB ROUTINE from “subroutine”)
18A. *Lab growth below sea level? CULTURE (SUB CULTURE from “subculture”)
30A. *Underwater speaker? WOOFER (SUB WOOFER from “subwoofer”)
40A. *Story line for “The Hunt for Red October”? PLOT (SUB PLOT from “subplot”)
41A. *Hatch? ENTRY (SUB ENTRY from “subentry”)
42A. *Underwater lateral surface? SIDE (SUB SIDE from “subside”)
46A. *Position on naval warfare? STANCE (SUB STANCE from “substance”)
62A. *Sonar reading? HEADING (SUB HEADING from “subheading”)
65A. *Message from beneath the surface? MISSIVE (SUB MISSIVE from “submissive”)
4D. *Scenery for “Operation Petticoat”? SET (SUB SET from “subset”)
66D. Prefix for the answers to starred clues, and word needed for those clues to make sense SUB (and “sub-”)

Today’s Wiki-est, Amazonian Googlies
Across
20. French spa town VICHY
Vichy is a spa town in the center of France. The people from Vichy are known as Vichyssois. After Paris, was occupied by the Germans in WWII, Vichy was chosen as the seat of government for what was called the French State. The Vichy government had theoretical authority even in occupied France, and is remembered for its collaboration with the German authorities. Vichy was chosen as the new seat of government because of its relative proximity to Paris, and simply because the town had the largest hotel room capacity in the “free zone” of the country.

23. Zenith APOGEE
In the celestial world, an apsis is a point in an orbit when the orbiting body is at its greatest, or least, distance from it’s center of orbit. The farthest and closest points of orbit are known as the apogee and perigee, when talking about bodies orbiting the Earth. The farthest and closest points for bodies orbiting the sun are known as the aphelion and perihelion.

25. Syria’s Bashar al-__ ASSAD
Dr. Bashar al-Assad is the current President of the Syrian Arab Republic and the son of the former President Hafez al-Assad whom he replaced in 2001. President Assad is a medical doctor, speaks fluent English and conversational French. Assad was studying ophthalmology in London when he met his wife, who is an Englishwoman.

28. Lorelei, notably LURER
Lorelei is the name of a legendary mermaid who lured fishermen by singing a beautiful song so that they steered their boats onto rocks lurking beneath the water’s surface.

30. *Underwater speaker? WOOFER (SUB WOOFER from “subwoofer”)
A subwoofer is a loudspeaker dedicated to the reproduction of bass/low frequencies.

37. Wilde’s “An __ Husband” IDEAL
“An Ideal Husband” is a stage comedy by Oscar Wilde that was first produced in 1895. It is a tale of political corruption and blackmail that takes place over a period of 24 hours. Purely coincidentally, I recorded the 1999 movie adaption of the play the other day and plan on watching it shortly. The 1999 film has a great cast that includes Julianne Moore, Minnie Driver, Cate Blanchett and Rupert Everett.

40. *Story line for “The Hunt for Red October”? PLOT (SUB PLOT from “subplot”)
“The Hunt for Red October” was the first novel published by Tom Clancy, and one of his best in my humble opinion. The story is centered on the defection of the captain of a top-secret Soviet submarine, who attempts to surrender his vessel to the Americans without the knowledge of his crew. The gripping storyline is actually inspired by real events, the failed mutiny on board the Soviet submarine Storozhevoy, in 1975. Unusually, the book was published by the United States Naval Institute, marking the first time it had ever published a fictional work. To this day it is the Institutes’s most successful title.

44. Bob Barker’s longtime sidekick Johnny OLSON
Johnny Olson was the announcer on “The Price is Right” from day one in 1972, until he passed away in 1985.

Bob Barker is a retired TV host of game shows, most famous for hosting “The Price Is Right” for 35 years from 1972 to 2007. He retired when he was 83½ years old, having secured the record as the oldest man ever to host a regularly scheduled TV game show. Barker is a celebrated animal rights activist, after becoming a vegetarian in 1979.

50. Bivouac ETAPE
“Étape” is the French word for stage, as in a “stage” in the Tour de France. It is used in English military circles to describe where troops halt overnight, but can also describe the section of the march itself. So, a march can be divided into stages, into étapes.

A “bivouac” is a temporary camp out of doors. The term comes to us via French from the Swiss/Alsatian word “biwacht” meaning “night guard”. The original bivouac was a group of soldiers camped out as a night guard.

56. Toll rd. TPKE
Back in the 15th century a “turnpike” was a defensive barrier across a road. By the 17th century the term was used for a barrier that stopped travellers until a toll was paid. By the 18th century a turnpike was the name given to a road with a toll.

59. Nintendo ancestor ATARI
At one point, the electronics and video game manufacturer Atari was the fastest growing company in US history. However, Atari never really recovered from the video game industry crash of 1983.

61. Caviar, e.g. ROE
“Caviar” is the roe of a large fish that has been salted and seasoned, and especially the roe of a sturgeon. Beluga caviar comes from the beluga sturgeon, found primarily in the Caspian Sea. It is the most expensive type of caviar in the world. 8 ounces of US-farmed beluga caviar can be purchased through Amazon.com for just over $850, in case you’re feeling peckish …

62. *Sonar reading? HEADING (SUB HEADING from “subheading”)
The British developed the first underwater detection system that used sound waves. Research was driven by defence demands during WWI, leading to production of working units in 1922. This new sound detection system was described as using “supersonics”, but for the purpose of secrecy the term was dropped in favor of an acronym. The work was done under the auspices of the Royal Navy’s Anti-Submarine Division, so ASD was combined with the IC from “superson-ic-s” to create the name ASDIC. The navy even went as far as renaming the quartz material at the heart of the technology “ASDivite”. By the time WWII came along, the Americans were producing their own systems and coined the term SONAR, playing off the related application, RADAR. And so the name ASDIC was deep-sixed …

68. Flavored, like some vodka INFUSED
The distilled beverage we call “vodka” takes its name from the Slavic word “voda” meaning “water”, with “vodka” translating as “little water”.

Down
1. Word for a rough date CIRCA
“Circa” is a Latin word meaning “around, near, about the time of”. We use “circa” directly in English to mean “about the time of”, as well as in derivative words such as “circle” and “circus”.

3. Demotion in 2006 news PLUTO
Pluto was discovered in 1930, and was welcomed as the ninth planet in our solar system. Pluto is relatively small in size, just one fifth of the mass of our own moon. In the seventies, astronomers began to discover more large objects in the solar system, including Eris, a “scattered disc object” at the outer reaches. Given that Eris is actually bigger than Pluto, and other objects really aren’t that much smaller, Pluto’s status as a planet was drawn into question. In 2006 there was a scientific definition for a “planet” agreed for the first time, resulting in Pluto being relegated to the status of “dwarf planet”, along with Eris.

5. “Uncle!” I GIVE UP!
To “say uncle” is an American expression meaning to submit or yield. Its usage dates back to the early 1900s, but nobody seems to know how “uncle!” came to mean “stop!”

6. More wacky ZANIER
Something described a zany clownish and bizarre. “Zany” can also be a noun, a term used for a clown or a buffon. The original noun was “Zanni”, a Venetian dialect variant of Gianni, short for Giovanni (John). Zanni was a character who appeared in comedy plays of the day, and was someone who aped the principal actors.

8. Annual parade sponsor MACY’S
The annual Macy’s Thanksgiving Day Parade in New York City has been held every year since 1924, with a brief suspension from 1942-1944. The parade was halted during WWII as there was a need for rubber and helium to support the war effort.

9. Sch. with a Mesa campus ASU
Arizona State University (ASU) has a long history, founded as the Tempe Normal School for the Arizona Territory in 1885. The athletic teams of ASU used to be known as the Normals, then the Bulldogs, and since 1946 they’ve been called the Sun Devils.

12. King David’s predecessor SAUL
According to the Hebrew Bible, Saul was the first King of Israel and ruled from 1049 BC to 1007 BC. Saul’s story is mainly recounted in the Books of Samuel.

35. One in a Vegas row SLOT
Slot machines earned the nickname “one-armed bandits” simply because they had “one arm”, the handle pulled to operate the machine, and they robbed you of all your money!

36. Hawaiian coffee-growing district KONA
Kona coffee is cultivated on the Big Island of Hawaii, on the slopes of Mauna Loa and Hualalai, two of the five active volcanoes on the island. Coffee plants were brought to Kona in 1828 and late in the 19th century, coffee became a viable and worthwhile crop. Today Kona is a one of the most expensive and popular coffees in the world.

38. Cube maker Rubik ERNO
What was originally called the “Magic Cube” became better known as Rubik’s Cube, named for its inventor Ernő Rubik. Rubik’s Cube is the world’s biggest selling puzzle game, with over 350 million sold in just over 30 years.

41. Where Zeno taught ELEA
Zeno of Elea was a Greek philosopher who lived in Elea, a Greek colony in Southern Italy. Zeno is famous for his “paradoxes”, a set of problems that really make you think! In the problem known as Achilles and the Tortoise, Zeno tells us that Achilles races a tortoise, giving the tortoise a head start (of say 100 meters). By the time Achilles reaches the starting point of the tortoise, the tortoise will have moved on, albeit only a small distance. Achilles then sets his sights on the tortoise’s new position and runs to it. Again the tortoise has moved ahead a little. Achilles keeps on moving to the tortoise’s new position but can never actually catch his slower rival. Or can he …?

42. Nigerian-born Grammy winner SADE
Sade’s real name is Helen Folasade Adu. Although she was born in Nigeria, Sade grew up and lives in the UK. She was the lead vocalist for the English group Sade, and adopted the name of the band. The band’s biggest hits were “Smooth Operator” (1984) and “The Sweetest Taboo” (1985).

44. Mo. for many Libras OCT
The constellation of Libra is named for the scales held by the goddess of justice. Libra is the only sign of the zodiac that isn’t named for a living creature.

57. Skunk Le Pew PEPE
Pepé Le Pew is a very likeable cartoon character from the Looney Tunes and Merrie Melodies series. Pepé is a French skunk, first introduced way back in 1945. He is always thinking of “l’amour” and chases the lady skunks, or a black cat with a white stripe painted down her back accidently.

58. ’50s-’80s pitcher Jim “Kitty” __ KAAT
Jim Kaat is a former professional baseball pitcher who went on to become a famous sportscaster, mainly calling games for the New York Yankees and the Minnesota Twins.

64. Entomologist’s tool NET
Entomology is the branch of zoology concerned with the study of insects. The etymology of “entomology” (!) is the Greek “entomon” (meaning “insect”) and “logia” (meaning “study of”). In turn, the Greek word “entomos” for insect is literal translation into Greek of “having a notch or cut”, in deference to the observation by Aristotle that insects have segmented bodies.