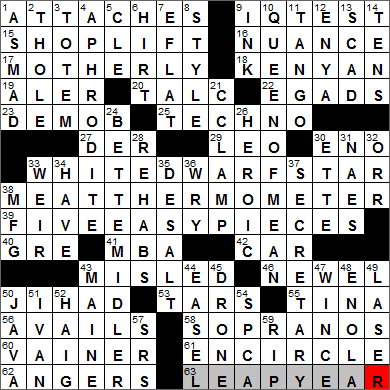 Today’s Wiki-est, Amazonian Googlies
Across
1. Some legal cases ATTACHES
Attaché is a French term which literally means “attached”, and is used for a person who is assigned to the administrative staff of some agency or other service. The term is most recognized as it applies to someone assigned to an Ambassador’s staff at an embassy. The word was extended to “attaché case” at the beginning of the twentieth century, meaning a leather case used for carrying papers, perhaps by an attaché at an embassy.

9. Its results commonly fall between 70 and 130 IQ TEST
The first usable intelligence test was invented by a French psychologist named Alfred Binet. Binet collaborated with Théodore Simon and together they produced the Binet-Simon Intelligence Scale that is still in use today for IQ tests.

18. Shilling spender KENYAN
The shilling is the currency of Kenya, having replaced the East African shilling in 1966. Kenya adopted a new constitution in 2010, and one of its provision is that the country’s currency can no longer bear the portrait of any individual.

19. O or A, e.g. ALER
The Baltimore Orioles (sometimes “the O’s”) were one of the eight charter teams of MLB’s American League, so the franchise dates back to 1901. Prior to 1901, the team has roots in the Minor League Milwaukee Brewers, and indeed entered the American League as the Brewers. In 1902 the Brewers moved to St. Louis and became the Browns. The team didn’t fare well in St. Louis, so when it finally relocated to Baltimore in the early fifties the team changed its name completely, to the Baltimore Orioles. The owners so badly wanted a fresh start that they traded 17 old Browns players with the New York Yankees. The trade didn’t help the team’s performance on the field in those early days, but it did help distance the new team from its past.

The Oakland Athletics (usually “the A’s”) baseball franchise was founded back in 1901 as the Philadelphia Athletics. The team became the Kansas City Athletics in 1955 and moved to Oakland in 1968.

23. Discharged British soldier DEMOB
After WWII, there were about five million personnel in the British military. The process of “demobilising” these forces started about six weeks after Victory in Europe was declared, but there was tremendous frustration at the perceived slow rate at which men and women returned to “civvy street”. One of the symbols of demobilisation in Britain was the civilian suit of clues issues to each individual, the so-called “demob suit”.

25. Electronic music genre TECHNO
Techno is a type of electronic dance music that originated in Detroit in the eighties. Techno involves a heavy beat in common time, and what seems to be a lot of repetition. Not for me …

Cologne is the fourth largest city in Germany, and is called “Koln” in German.

29. Sign of summer LEO
The constellation called Leo of course can be said to resemble a lion. Others say that it resembles a bent coat hanger. “Leo” is the Latin for “lion”, but I’m not sure what the Latin is for “coat hanger” …

30. Roxy Music alum ENO
Brian Eno started out his musical career with the band Roxy Music. However, Eno’s most oft-played composition (by far!) is Microsoft’s “start-up jingle”, the 6-second sound you hear when the Windows operating system is booting up. Eno might have annoyed the Microsoft folks when he stated on a BBC radio show:

33. Sirius B, for one WHITE DWARF STAR
A white dwarf is what’s left of a star after it has collapsed, before it turns into a neutron star or black hole. A white dwarf might have the same mass as our Sun, but that mass has collapsed into a volume about the size of the Earth. Our nearest white dwarf is Sirius B.

39. They included Chopin’s “Prelude in E Minor,” in a film title FIVE EASY PIECES
The 1970 film “Five Easy Pieces” stars Jack Nicholson and Karen Black. Nicholson plays a man working on an oil rig, even though as boy he had been a piano prodigy. The “Five Easy Pieces” are five classical works written for the piano, and are all played by characters in the film:

40. Princeton Review subj. GRE
Passing the Graduate Record Examination (GRE) is usually a requirement for entry into graduate school here in the US.

The Princeton Review is a company that offers test preparation for those about to take college admission tests.

46. Staircase support NEWEL
A newel is a principal upright post that supports a handrail beside a staircase. Newels are found at the top and bottom of the banister, and sometimes in between. Newels are often adorned with decorative trim to set them apart from the other posts by the staircase.

50. Arabic for “struggle” JIHAD
In the Islamic tradition “jihad” is a duty, either an inner spiritual struggle to fulfill religious obligations or an outward physical struggle to defend the faith. Someone engaged in jihad is called a “mujahid” with the plural being “mujahideen”.

53. Salts TARS
A Jack Tar, or just “tar”, was a seaman in the days of the British Empire. The term probably arose due to a sailor’s various uses of tar back then, including waterproofing his clothes and using tar in his hair to slick down his ponytail.

55. “The Diana Chronicles” author Brown TINA
Tina Brown is a British journalist, best known in America as author of “The Diana Chronicles”, a biography of Diana, Princess of Wales, of whom Brown was a personal friend. Brown has turned her attention to this side of the Atlantic and is reportedly working on a book about Hillary and Bill Clinton.

Down
2. Oarlock pin THOLE
In a boat, a thole is a wooden peg or pin that acts as a fulcrum for an oar that it is used in rowing. The thole is inserted into a hole in the gunwale, the top edge of the side of the boat.

3. Tribal emblem TOTEM
Totem poles are large sculptures that have been carved from trees. Totem poles are part of the culture of Native Americans in the Pacific Northwest of North America.

5. Indians’ home, on scoreboards CLE
The Cleveland baseball franchise started out in 1869 as the Forest Citys named after “Forest City”, which is the nickname for Cleveland. After a number of transitions, in 1914 the team took on the name “Indians”. The media came up with name “Indians” after being asked for suggestions by the team owners. “Indians” was inspired by the successful Boston team of the day, the Boston Braves.

6. “Cotton Candy” musician HIRT
Al Hirt was a trumpeter and bandleader. Hirt’s most famous recordings were the song “Java” and the album “Honey in the Horn”.

7. Key for some clarinets E-FLAT
The clarinet is a lovely-sounding instrument, isn’t it? The name comes from the Italian word “clarino” meaning “trumpet” with the “-et” suffix indicating “small”.

8. Panache STYLE
Someone exhibiting panache is showing dash and verve, and perhaps has a swagger. “Panache” is a French word used for a plume of feathers, especially in a hat.

10. Nickname for Leona Helmsley QUEEN OF MEAN
Leona Helmsley was a high-rolling real estate investor and hotel operator in New York City. She was convicted of income tax evasion in 1989 and sentenced to 16 years in jail. At her trial a witness quoted her as saying “We don’t pay taxes. Only the little people pay taxes.” No wonder she was known as the Queen of Mean …

13. Whole lot SCAD
The origin of the word “scads”, meaning “lots and lots”, is unclear, although back in the mid-1800s “scads” was used to mean “dollars”.

14. Place for an adder? TENS
Someone adding up numbers might count the ones, tens, hundreds etc.

32. Bruin great ORR
Bobby Orr is regarded as one of the greatest hockey players of all time. By the time he retired in 1978 he had undergone over a dozen knee surgeries. At 31 years of age, he concluded that he just couldn’t skate anymore. Reportedly, he was even having trouble walking …

35. Make potable, as seawater DESALT
Something that is “potable” is fit to drink. The term derives from the Latin verb “potare” meaning “to drink”, which is also the root for our word “potion”.

37. Cabinet part SECRETARY
In the Westminster system, the Cabinet is a group of sitting politicians chosen by the Prime Minister to head up government departments and also to participate collectively in major governmental decisions in all areas. In the US system, the Cabinet is made up not of sitting politicians, but rather of non-legislative individuals who are considered to have expertise in a particular area. The Cabinet members in the US system tend to have more of an advisory role to the President, in their areas of expertise.

50. Language of software engineers JAVA
Java is a programming language developed by Sun Microsystems. Java was originally designed for interactive television, but didn’t fit the needs at the time. Back then it was called Oak, named after an oak tree that stood outside the designer’s office. Later it was called Green and finally named Java, which was simply picked out of a list of random words.

51. Novelist Turgenev IVAN
Ivan Turgenev was a Russian novelist and playwright. Turgenev’s most famous works are a collection of short stories called “A Sportsman’s Sketches” (1852) and the novel “Fathers and Sons” (1862).

52. White House chief of staff after Haldeman HAIG
Alexander Haig was Secretary of State under President Reagan, and White House Chief of Staff under Presidents Nixon and Ford. Famously, Haig took over temporary control of the country immediately after President Reagan was shot in 1981. To do so was a pragmatic move, while waiting on Vice President Bush to arrive in Washington. There was much debate at the time about the legality of the steps taken, as the presidential line of succession called out in the US Constitution is President, Vice President, Speaker of the House, President pro tempore of the US Senate, and then Secretary of State.

H. R. Haldeman served as White House Chief of Staff to President Richard Nixon. Haldeman became embroiled in the Watergate scandal, which led to him resigning from government. Haldeman was later found guilty of several charges related to the Watergate cover-up and served 18 months in prison.

54. Humane org. SPCA
Unlike in most developed countries, there is no “umbrella” organization in the US with the goal of preventing cruelty to animals. Instead there are independent organizations set up all over the nation using the name SPCA. Having said that, there is an organization called the American Society for the Prevention of Cruelty to Animals (ASPCA) that was originally intended to operate across the country, but really it now focuses its efforts in New York City.