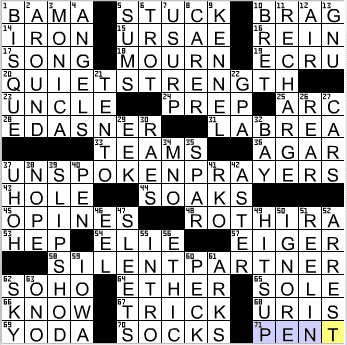 Today’s Wiki-est, Amazonian Googlies
Across
1. The Crimson Tide’s school, for short : BAMA
The athletic teams of the University of Alabama (“Bama”) are nicknamed the Crimson Tide, a reference to the team colors: crimson and white.

14. Fe on the periodic table : IRON
The Latin word for “iron” is “ferrum”, which gives us “Fe” for the metal’s chemical symbol.

19. Light brown : ECRU
The shade called ecru is a grayish, yellowish brown. The word “ecru” comes from French and means “raw, unbleached”. “Ecru” has the same roots as our word “crude”.

23. Cry of surrender : UNCLE!
To “say uncle” is an American expression meaning to submit or yield. Its usage dates back to the early 1900s, but nobody seems to know how “uncle!” came to mean “stop!”

28. Lou Grant portrayer : ED ASNER
Ed Asner is most famous for playing the irascible but lovable Lou Grant on “The Mary Tyler Moore Show” and on the spin-off drama “Lou Grant”. Off-screen, Asner is noted for his political activism. He served two terms as president of the Screen Actors Guild (SAG) and was very involved in the 1980 SAG strike. When “Lou Grant” was cancelled in 1982, despite decent ratings, there was a lot of talk that the cancellation was a move by the network against Asner personally. In fact one of Asner’s activist colleagues, Howard Hesseman (who played Johnny Fever), found that his show “WKRP in Cincinnati” was also cancelled … on the very same day …

“Lou Grant” is a spinoff from “The Mary Tyler Moore Show”. Lou Grant, played so ably by Ed Asner, headed up a television newsroom in Minneapolis. In the spinoff, Grant was the city editor of the fictional “Los Angeles Tribune”. The original show was a sitcom, the spinoff was a drama series.

31. Tar pits locale : LA BREA
The La Brea Tar Pits are located right in the heart of the city of Los Angeles. At the site there is a constant flow of tar that seeps up to the surface from underground, a phenomenon that has been around for tens of thousands of years. What is significant is that much of the seeping tar is covered by water. Over many, many centuries animals came to the water to drink and became trapped in the tar as they entered the water to quench their thirsts. The tar then preserved the bones of the dead animals. Today a museum is located right by the Tar Pits, recovering bones and displaying specimens of the animals found there. It’s well worth a visit if you are in town …

33. Cowboys and Indians, e.g. : TEAMS
The Dallas Cowboys play in the National Football Conference of the NFL. The Cowboys are famous for a lengthy streak of 20 consecutive winning seasons, from 1966 to 1985. They are the highest valued sports franchise in the country. The only team in the world that’s worth more money is the UK’s Manchester United soccer team.

The Cleveland baseball franchise started out in 1869 as the Forest Citys named after “Forest City”, which is the nickname for Cleveland. After a number of transitions, in 1914 the team took on the name “Indians”. The media came up with name “Indians” after being asked for suggestions by the team owners. “Indians” was inspired by the successful Boston team of the day, the Boston Braves.

36. Lab gel made from seaweed : AGAR
Agar is a jelly extracted from seaweed that has many uses. Agar is found in Japanese desserts, and can also be used as a food thickener or even as a laxative. In the world of science it is the most common medium used for growing bacteria in Petri dishes.

48. 401(k) alternative named for a Delaware sen. : ROTH IRA
Roth Individual Retirement Accounts were introduced in 1997 under a bill sponsored by Senator William Roth of Delaware.

53. Like cool cats : HEP
The slang term “hep” meaning “cool” has the same meaning as the later derivative term “hip”. The origins of “hep” seem unclear, but it was adopted by jazz musicians of the early 1900s.

54. 1986 Peace Nobelist Wiesel : ELIE
The author Elie Wiesel is a holocaust survivor. His best known title is “Night”, which tells of his experiences in Auschwitz and Buchenwald. Wiesel was awarded the Nobel Peace Prize in 1986.

57. “The __ Sanction”: Eastwood thriller set in the Alps : EIGER
“The Eiger Sanction” is a very entertaining action film that was released in 1975, which stars and was directed by Clint Eastwood. The movie is all about assassins and mountain climbers, and is based on a 1972 novel of the same name by Trevanian (a pen name of author Rodney William Whitaker).

62. NYC or London area : SOHO
The Manhattan neighborhood known today as SoHo was very fashionable in the early 1900s, but as the well-heeled started to move uptown the area became very run down and poorly maintained. Noted for the number of fires that erupted in derelict buildings, SoHo earned the nickname “Hell’s Hundred Acres”. The area was then zoned for manufacturing and became home to many sweatshops. In the mid-1900s artists started to move into open loft spaces and renovating old buildings as the lofts were ideal locations in which an artist could both live and work. In 1968, artists and others organized themselves so that they could legalize their residential use of an area zoned for manufacturing. The group they formed took its name from the name given to the area by the city’s Planning Commission i.e “South of Houston”. This was shortened from So-uth of Ho-uston to SoHo as in the SoHo Artists Association, and the name stuck.

The area of London called Soho had a very poor reputation for most of the 20th century as it was home to the city’s red light district. Soho has been transformed though, and has been a very fashionable neighborhood since the 1980s.

64. Bygone anesthetic : ETHER
Ethers are a whole class of organic compounds, but in the vernacular “ether” is specifically diethyl ether. Diethyl ether was once very popular as a general anesthetic.

67. April Fool’s antic : TRICK
April Fool’s Day is celebrated on April 1st in the western world. In the US (and Ireland) one can make practical jokes all day long if one wants. But in the UK there is a noon deadline. Anyone pranking after midday is called an “April Fool”.

69. Jedi guru : YODA
Yoda is one of the most beloved characters in the “Star Wars” series of films. Yoda’s voice was provided by the great modern-day puppeteer Frank Oz of “Muppets” fame.

70. ’90s White House cat : SOCKS
Socks was the pet cat belonging to the Clinton family while they lived in the White House. When President Clinton left office, Socks was adopted by Bettie Currie, the President’s secretary. Apparently Socks wasn’t getting on well with Buddy, the Clinton’s pet dog.

Down
1. Shellfish soup : BISQUE
A traditional bisque is a creamy soup made from crustaceans such as lobster, crab or shrimp. The term “bisque” probably comes from the Bay of “Biscay” off the west coast of France, a nod to the French origin of the soup and its seafood content. So, if you see a vegetable “bisque” in a restaurant, you’ll know that the term is being misused.

3. Tennis great Seles : MONICA
Monica Seles has a Hungarian name as she was born to Hungarian parents in former Yugoslavia. Seles was the World No. 1 professional tennis player in 1991 and 1992 before being forced from the sport when she was stabbed by a spectator at a match in 1993. She did return to the game two years later, but never achieved the same level of success.

10. One of TV’s Mavericks : BRET
“Maverick” is a TV series set in the Wild West and starring James Garner as Bret Maverick. Midway through the first series, Bret was given a brother called Bart, who was played by Jack Kelly. Once the brother’s character was introduced, Bart and Bret alternated as the lead character in each weekly episode. Both Mavericks were expert poker players who got themselves in and out of all sorts of trouble. After the third season, James Garner left the show and was replaced by actor Roger Moore who played a Maverick cousin called Beau. Still later, actor Robert Colbert was introduced as a third brother called Brent Maverick.

13. African antelope : GNU
A gnu is also known as a wildebeest, an antelope native to Africa. “Wildebeest” is actually the Dutch word for “wild beast”.

30. Explorer John and comical Charlotte : RAES
John Rae was a Scottish explorer, who took on the task of searching for the ill-fated Franklin Expedition of 1845. The Franklin Expedition was itself searching for the elusive Northwest Passage through the Arctic Ocean connecting the Atlantic to the Pacific. John Rae stirred up much controversy back in England when he reported evidence of cannibalism among the ill-fated Franklin explorers.

41. Former MGM rival : RKO
The RKO Pictures studio was formed when RCA (RADIO Corporation of America) bought the KEITH-Albee-ORPHEUM theaters (and Joe Kennedy’s Film Booking Offices of America). The RKO acronym then comes from the words “Radio”, “Keith” and “Orpheum”.

47. Rains ice pellets : SLEETS
Apparently “sleet” is a term used to describe two weather conditions. One is a shower of ice pellets, smaller than hail, and the second is a mixture of rain and snow, with the snow melting as it falls. It’s the second definition that I have always used …

55. Emcee’s speech : INTRO
“Emcee” come from “MC”, an acronym standing for Master or Mistress of Ceremonies.

59. Des Moines’s state : IOWA
The city of Des Moines is the capital of Iowa, and takes its name from the Des Moines River. The river in turn takes its name from the French “Riviere des Moines” meaning “River of the Monks”. It looks like there isn’t any “monkish” connection to the city’s name per se. “Des Moines” was just the name given by French traders who corrupted “Moingona”, the name of a group of Illinois Native Americans who lived by the river. However, others do contend that French Trappist monks, who lived a full 200 miles from the river, somehow influenced the name.

62. Big __ Country : SKY
“Big Sky Country” is a nickname for the beautiful state of Montana.