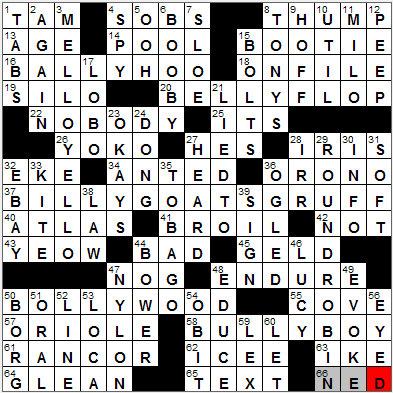 CROSSWORD SETTER: Gareth Bain
THEME: BALLY to BULLY … the theme answers start with a word in the format BxLLY, and the “x” changes from “A” to “U”, rotating through each of the vowels:

Today’s Wiki-est, Amazonian Googlies
Across
1 Scottish hat TAM
A tam o’shanter is a man’s cap traditionally worn by Scotsmen. “Tams” were originally all blue (and called “blue bonnets”), but as more dyes became readily available they became more colorful. The name of the cap comes from the title character of Robert Burns’ poem “Tam O’Shanter”.

13 Wharton’s “The __ of Innocence” AGE
“The Age of Innocence” is a novel by Edith Wharton, for which she won a Pulitzer Prize in 1921.

15 Covering for “piggies” BOOTIE
When talking to a little child, one refer to his or her toes as “little piggies”.

16 Big stink BALLYHOO
“Balyhoo”, meaning hype or publicity, was originally circus slang dating back to the early 1900s. No one really knows where the term comes from, but I can tell you there is a village in County Cork in Ireland called Ballyhooly!

19 Rural storage structure SILO
Silo is a Spanish word that we absorbed into English, originally coming from the Greek word “siros” that described a pit in which one kept corn.

26 “The Ballad of John and __” YOKO
John and Yoko married at the height of the Vietnam War in 1969. The couple decided to use the inevitable publicity surrounding their wedding and honeymoon to promote peace in the world. They honeymooned in the Presidential Suite of the Amsterdam Hilton, inviting the world’s press to join them and to witness their “bed-in”. They spent the week talking about peace, and an end to war. The marriage and bed-in is chronicled by the Beatles in their song “The Ballad of John and Yoko”.

32 Barely get, with “out” EKE
To “eke out” means to “make something go further or last longer”. For example, you could eke out your income by cutting back on expenses. I always have a problem with the commonly cited definition of “eke out” as “barely get by”. Close but no cigar, I say …

40 Cartographer’s book ATLAS
We call a book of maps an “atlas” after a collection of maps published by the famous Flemish geographer Gerhadus Mercator. Mercator’s collection contained a frontispiece with an image of Atlas the Titan from Greek mythology holding up the world on his shoulders. That image gave us our term “atlas”.

45 Neuter, as a horse GELD
We can use the verb “to geld” to mean “to weaken, deprive of strength”. The term comes from the act of gelding an animal, castration of the male. “Geld” comes from the Old Norse word “gelda” meaning “castrate”.

47 Seasonal potable NOG
It’s not really clear where the term “nog” comes from although it might derive from the word “noggin”, which was originally a small wooden cup that was long associated with alcoholic drinks.

50 Mumbai-based film industry BOLLYWOOD
Bollywood is an informal name given to the huge film industry based in Mumbai in India. The term “Bollywood” is a melding of “Bombay”, the old name for Mumbai, and of course “Hollywood”.

57 Camden Yards ballplayer ORIOLE
Oriole Park is home to the Baltimore Orioles baseball team. The full name of the stadium is Oriole Park at Camden Yards.

63 Outlaw Clanton IKE
Ike and Billy Clanton participated in what has to be the most famous gunfight in the history of the Old West, the Gunfight at the O.K. Corral that took place in Tombstone, Arizona. Strangely enough, the fight didn’t happen at the O.K. Corral, but took place six doors down the street in a vacant lot next to a photography studio.

66 Composer Rorem NED
American composer Ned Rorem is famous for his musical compositions, but also for his book “Paris Diary of Ned Rorem”, which was published in 1966. Rorem talks openly about his sexuality in the book, and also about the sexuality of others including Noel Coward, Leonard Bernstein and Samuel Barber, much to some people’s chagrin.

Down
1 Settings for columned documents TABS
Like most features on our computer keyboards, the tab key is a hangover from the days of typewriters. When using a typewriter, making entries into a table was very tedious as it involved lots of tapping on the space bar and backspace key. So, a lever was added to typewriters that allowed the operator to “jump” across the page to positions that could be set by hand. Later this was simplified to a tab key, which could be depressed causing the carriage to jump to the next tab stop in much the same way that the modern tab key works on a computer.

3 Mountain Dew competitor MELLO YELLO
Like so many beverages introduced by the Coca-Cola Company, Mello Yello was launched to compete against a successful drink already on the market. Mello Yello first hit the shelves in 1979, designed to take market share from Pepsico’s “Mountain Dew”.

6 Word with hatch or prize BOOBY
“Booby hatch” is a not-very-nice slang term for a psychiatric hospital.

7 Gin fizz fruit SLOE
The sloe is the fruit of the blackthorn bush, and is the flavoring that gives gin its distinctive taste.

By definition, a cocktail known as a Fizz includes lemon or lime juice and carbonated water. The most popular of the genre is the Gin Fizz, made from 3 parts gin, 2 parts lemon juice, 1 part sugar syrup and 5 parts soda water.

8 Broadway awards TONYS
The full name for the Tony Award is the Antoinette Perry Award for Excellence in Theatre. Antoinette Perry was an American actress and co-founder of the American Theatre Wing, one of the organizations that selects the award recipients.

10 Either of two Monopoly sqs. UTIL
The commercial game of Monopoly is supposedly a remake of “The Landlord’s Game” created in 1903 by a Quaker woman called Lizzie Phillips. Phillips used her game as a tool to explain the single tax theory of American economist Henry George. The Landlord’s Game was first produced commercially in 1924. The incredibly successful derivative game called Monopoly was introduced in 1933 by Charles Darrow, who became a very rich man when Parker Brothers bought the rights to the game just two years later in 1935.

11 Venus de __ MILO
The famous “Venus de Milo” is so named as the statue was discovered in the ruins of the ancient city of Milos, on the Aegean island of the same name. I’ve been lucky enough to see the original in the Louvre in Paris, and was surprised at how large it is (6 ft 8 in tall).

29 Tournament in which you play everyone else at least once ROUND-ROBIN
The original use of the term “round-robin” was in signing documents. The idea was that multiple signatures were added to a controversial document in an arrangement that disguised the name of the “ring leader” of those endorsing the letters contents.

32 Site for cyberbidders EBAY
eBay is an auction site with a twist. If you don’t want to enter into an auction to purchase an item, there’s a “Buy It Now” price. Agree to pay it, and the item is yours …

38 Murphy’s __ LAW
Murphy’s Law can be stated as, “Anything that can go wrong will go wrong”. The concept behind the “law” has been around for eons, but the first association with the name “Murphy” appeared in print in 1952.

44 Leafy hideaway BOWER
Our word “bower” comes from the Old English “bur” meaning a hut or dwelling. We’ve been using “bower” to mean a “leafy arbor”, a “dwelling” defined by surrounding trees, since way back in the 1500s.

46 Charlie Brown’s tormentor LUCY
In Charles Schulz’s fabulous comic strip “Peanuts”, Charlie Brown is friends with at least three members of the van Pelt family. Most famously there is Lucy van Pelt, who bosses everyone around, particularly Charlie. Then there is Linus, Lucy’s younger brother, the character who always has his security blanket at hand. Lastly there is an even younger brother, Rerun van Pelt. Rerun is constantly hiding under his bed, trying to avoid going to school.

54 “In memoriam” write-up OBIT
“Obituary” comes from the Latin “obituaris”, originally the word for the record of a death of a person, although the literal meaning is “pertaining to death”.

59 Superman nemesis Luthor LEX
Lex Luthor is the arch-nemesis of Superman in comics. Luthor has been portrayed in a number of guises in the comic world as well in movies and on the small screen. For example, he appeared as Atom Man in the 1950 film series “Atom Man vs. Superman”, and was played by actor Lyle Talbot, opposite Kirk Alyn’s Superman.