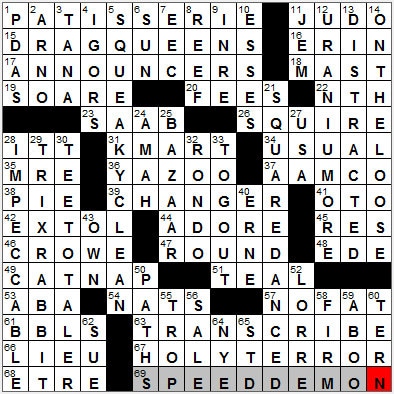 Today’s Wiki-est, Amazonian Googlies
Across
1. Seller of beignets and éclairs PATISSERIE
A patisserie is a French bakery that sells pastries, or “tartes”.

A beignet is a pastry made from choux dough that is deep fried, and usually served with powdered sugar on top. “Beignet” is a French word that translates as “bump”.

The name for the pastry known as an éclair is clearly French in origin. The French word for lightning is “éclair”, but no one seems to be too sure how it came to be used for the rather delicious “temptation”.

11. Women’s medal-awarding Olympic sport since 1992 JUDO
Judo is a martial art from Japan that was developed relatively recently, in 1882. The name “judo” translates as “gentle way”.

15. Men in dress clothes? DRAG QUEENS
The etymology of the term “drag”, as used in the transvestite world, seems to be unclear. It perhaps relates to the tendency of a transvestite’s skirts to drag along the ground in days of old (although why they just didn’t hitch up their skirts is beyond me!).

18. One on a catboat MAST
A catboat is a sailing vessel, one with the mast mounted very near the bow.

19. “__ they all, all honourable men”: “Julius Caesar” SO ARE
William Shakespeare’s play “Julius Caesar” is a little unusual, in that Julius Caesar is not the main character. The protagonist is actually Marcus Brutus, who plays a major role in Caesar’s assassination.

23. Bankrupt European automaker SAAB
SAAB stands for Svenska Aeroplan AB, which translates into English as Swedish Aeroplane Limited. SAAB was, and still is, mainly an aircraft manufacturer. If you take small hops in Europe you might find yourself on a SAAB passenger plane. The SAAB automobile division was acquired by General Motors in the year 2000, who then sold it to a Dutch concern in 2010. However, SAAB (automotive) finally went bankrupt in 2011.

26. Escort SQUIRE
A squire can be an escort, say one attending to a woman. A squire is also a young nobleman who attended a knight in days of yore. A fun example would be Sancho Panza who accompanied the deluded Don Quixote.

28. Wednesday relative ITT
In the television sitcom “The Addams Family”, the family had a frequent visitor called Cousin Itt. Itt is a short man with long hair that runs from his head to the floor. Cousin Itt was played by Italian actor Felix Silla.

Wednesday Addams is the daughter in the television sitcom “The Addams Family”. In the original cartoon strip, members of the Addams family had no given names. They were introduced for the television show.

31. Alaska is the only state without one KMART
Kmart is the third largest discount store chain in the world, behind Wal-Mart and Target. Kmart is famous for its promotions known as “blue light specials”, a program first introduced in 1965 and discontinued in 1991. I remember being in a Kmart store soon after coming to live in the US. That evening an employee installed a light stand an aisle away from me, switched on a flashing blue light and there was some unintelligible announcement over the loudspeaker system. I had no idea what was going on …

35. One of a G.I.’s three squares MRE
The Meal, Ready-to-Eat (MRE) comes in a lightweight package, easier to tote around. It replaced the more cumbersome Meal, Combat, Individual (MCI) in 1981, a meal-in-a-can. In turn, the MCI had replaced the C-ration in 1958, a less sophisticated meal-in-a-can with a more limited choice.

36. River near Vicksburg YAZOO
Vicksburg, Mississippi is a city located about 40 miles west of Jackson, the state capital. Vicksburg sits on the Mississippi and Yazoo rivers.

37. Auto repair franchise AAMCO
AAMCO is named after one of the two founders, Anthony A. Martino (AAM). The company was founded in 1963 in Philadelphia, and opened its first franchise in Newark that same year. There are now about 800 franchises, and AAMCO is the largest chain in the world specializing in automotive transmissions.

41. Prefix with laryngology OTO-
The branch of medicine known as “ear, nose and throat” is more correctly called otolaryngology.

46. “Mystery, Alaska” star CROWE
Russel Crowe is a highly successful actor from New Zealand. Understandably, he doesn’t like people to call him “Australian”, even though it was in Australia that he launched his acting career. Not too long before the 9/11 attacks, the FBI contacted Crowe to inform him that al-Qaeda were plotting to kidnap him as part of a general attack on high-profile “American” icons. For a few months the New Zealander was guarded by Secret Service agents.

“Mystery, Alaska” is a 1999 movie about an Alaskan ice hockey team which gets to play against the New York Rangers.

48. City east of Utrecht EDE
Ede is a small town in the Netherlands located between the cities of Arnhem and Utrecht.

51. Color on San Jose Shark uniforms TEAL
The San Jose Sharks hockey team play their home games at the HP Pavillion in San Jose, a venue that we locals call “the Shark Tank”.

54. Expos, now NATS
The Washington Nationals baseball team started out life as the Montreal Expos in 1969. The Expos moved to Washington in 2005 becoming the Nats. There are only two Major Leagues teams that have never played in a World Series, one being the Mariners and the other the Nats.

61. OPEC units BBLS
The volume of one oil barrel is equivalent to 42 US gallons. A barrel is correctly abbreviated to “bbl”. Barrels aren’t really used for transporting crude oil anymore. Instead, oil moves in bulk through pipelines and in tankers. “Barrel” is just a quantity these days.

63. Do a steno’s job TRANSCRIBE
Stenography is the process of writing in shorthand. The term comes from the Greek “steno” (narrow) and “graphe” (writing).

67. Rapscallion HOLY TERROR
We might call a little imp a rapscallion, an evolution from “rascallion”, which in turn comes from “rascal”.

68. Infinitive with a circumflex ETRE
A circumflex is a diacritic mark used routinely in some languages, such as French. For example, there’s a circumflex over the first “e” in “être”, the French for “to be”.

Down
1. Some organizers PDAS
A device like perhaps an iPhone, Droid, or Treo can be termed a Personal Digital Assistant (PDA).

2. River in Tuscany ARNO
The Arno is the principal river in the Tuscany region of Italy, passing through the cities of Florence and Pisa. Famously the Arno flooded in 1966, the worst flood in the region for centuries. There were numerous deaths and extensive destruction of priceless art treasures, particularly in Florence.

3. Ethiopia’s largest lake TANA
Lake Tana is the largest lake in Ethiopia, and is the source of the Blue Nile. The lake has a number of islands of significant size, many of which are home to ancient monasteries.

6. Item on Argentina’s flag SUN
The flag of Argentina is composed of three horizontal bands, light blue on the top and bottom, and white across the middle. The simpler version of the flag just has these three bands. The full version of the flag includes a sun in the center of the white band.

9. About IN RE
The term “in re” is Latin and literally translates as “in the matter”, but is used to mean “in regard to” or “in the matter of”.

11. Scout’s brother, in a Harper Lee novel JEM
Jem and Scout are two of the children of Atticus Finch, the protagonist in the novel “To Kill A Mocking Bird”.

Harper Lee’s Pulitzer Prize-winning novel “To Kill A Mockingbird” was first published in 1960. The book is a mainstay in English classes all around the world and is a great ambassador for American literature, I’d say.

24. Hunan nurse AMAH
“Amah” is an interesting word in that we associate it so much with Asian culture and yet it actually comes from the Portuguese “ama” meaning “nurse”. Ama was imported into English in the days of the British Raj in India when a wet-nurse became known as an amah.

27. “Psych” network USA
“Psych” is a fun detective show on the USA Network. “Psych” is actually the longest running USA-produced show on the network, and has been around since 2006.

29. Pink-nosed cereal pitcher TRIX RABBIT
Trix is a corn-based breakfast cereal that has been around since 1954, produced by General Mills. Ads for the cereal featured Trix Rabbit, who would try hard to get hold of bowls of the cereal. He would always get caught though, and be admonished with, “Silly rabbit, Trix are for kids!” With 46% sugar content, the rabbit probably wouldn’t have liked it anyway …

30. One who won’t take a shot? TEETOTALER
Teetotalism is the practice of abstaining from alcohol. The teetotalism movement started in England in the 1800s.

32. Lively movement RONDO
A rondo was often chosen by composers for the last movement of a sonata (or symphony or concerto, for that matter). In rondo form there is a principal theme that alternates with a contrasting theme(s). So, the original theme anchors the whole piece in between secondary digressions.

33. Dress up TOG OUT
The verb “tog”, meaning to dress up, comes from the Latin “toga”. “Tog” can be use as an informal word for a coat or a cloak. Back in Ireland, togs are what we call swimming shorts.

40. Shore bird ERNE
The ern (also erne) is also called the white-tailed eagle, and the sea-eagle.

52. He played Ugarte in “Casablanca” LORRE
The marvelous actor Peter Lorre was born in what is now modern-day Slovakia. Lorre’s real name was Laszlo Lowenstein. He started acting in Vienna when he was quite young, only 17 years old. When Hitler came to power, the Jewish Lowenstein headed to Paris and then London, eventually ending up in Hollywood. Lorre found himself typecast as the wicked foreigner in American movies, but I think he sneered and snarled his way to the bank.

55. Rays’ home field, familiarly, with “The” TROP
Tropicana Field is home to the Tampa Bay Rays of Major League Baseball.

59. Bug follower? -ABOO
“Bugaboo” is another term for a bogeyman, an imaginary and scary creature used to frighten children.

60. Shore bird TERN
Terns are seabirds that are found all over the world. The Arctic Tern makes a very long-distance migration. One Arctic Tern that was tagged as a chick in Great Britain in the summer of 1982, was spotted in Melbourne, Australia just three months later. The bird had traveled over 14,000 miles in that time, an average of about 150 miles a day. Remarkable …

62. Boy who fought his father in a 1969 hit SUE
“A Boy Named Sue” is a classic song by Shel Silverstein that was made famous by Johnny Cash. Cash actually recorded the song at a live concert he gave in 1969 at San Quentin State Prison.

64. Emmy-winning scientist NYE
That would be “Bill Nye the Science Guy”. Bill’s show ran on Disney for 4 years from 1993-97. I was surprised to learn that Bill Nye was married briefly to Blair Tindall, the author of “Mozart in the Jungle”. That’s a great book, if anyone is interested …